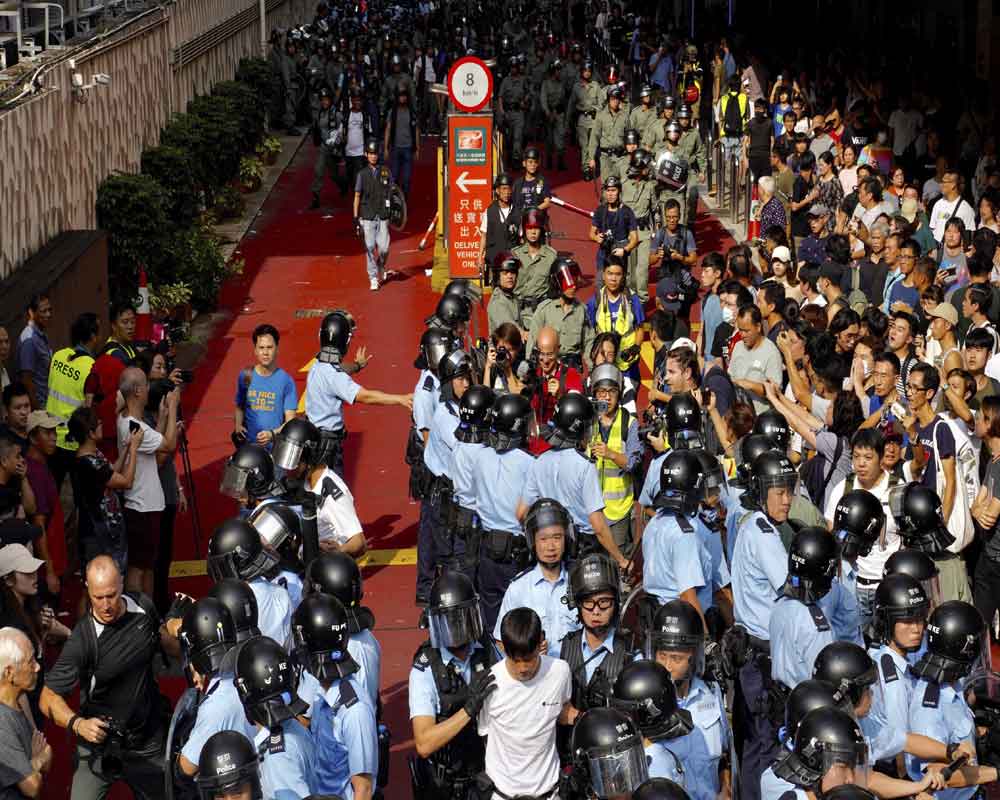 Fights erupted in Hong Kong on Saturday with political rivals trading blows in a mall and Beijing supporters using Chinese flags to assault opponents on a street, deepening the city's polarisation after months of pro-democracy protests.

The once-stable international hub has been convulsed by weeks of huge, sometimes violent rallies calling for greater democratic freedoms and police accountability.

The movement is the biggest challenge to China's rule since the city was handed back by Britain in 1997 and shows no sign of ending, with city leaders and Beijing taking a hard line.

Fights have begun breaking out with increased frequency after pro-democracy supporters began holding impromptu singalongs of a popular protest anthem -- and as pro-Beijing supporters have held rival gatherings to sing China's national anthem.

In the district of Fortress Hill on Saturday, a group of men, many waving Chinese flags and wearing blue t-shirts declaring "I love HK police", attacked people perceived to be pro-democracy protesters.

Multiple videos posted online showed the group of men assaulting largely younger victims with large flags on poles -- and with punches and kicks -- as terrified onlookers ran away.

Hong Kong police did not respond to a request for comment on the incident. Fortress Hill is next to North Point, an area of the city where similar mob attacks by government supporters have occurred this summer and which has long been a bastion of pro-Beijing sentiment.

Shortly before the assaults, the men were filmed tearing down post-it notes and posters on a nearby "Lennon Wall", pro-democracy billboards which have sprung up across the city.

Within hours, the wall was back up as crowds put up new slogans and messages.

"It makes me so angry," a 37-year-old local pro-democracy protester, who gave her first name as Ed, told AFP.

"These walls are a form of emotional support, it shows the movement is still alive. But even if they destroy it, we will just build it again."

Fights later broke out between pro-China and pro-democracy supporters in Amoy Plaza, a shopping centre on the other side of the harbour.

An AFP photographer at the scene said some two hundred people had gathered to wave Chinese flags and sing the national anthem.

Violence erupted after pro-democracy supporters arrived on the scene with several people on both sides visibly bloodied and bruised.

Police with shields and helmets later rushed into the mall, ending the fights. Some young pro-democracy supporters were seen being detained outside and inside the mall by police.

Democracy protesters have accused police of taking sides, clamping down harder on their camp than violent government supporters -- accusations the force has strongly denied.

An attack by pro-government men with sticks in the town of Yuen Long in July which left more than 40 people hospitalised sent anger soaring after police were accused to taking too long to get to the incident and failing to arrest the aggressors on site.

Hong Kong has been battered by nearly 100 days of protests, sparked by a now-abandoned plan to allow extraditions to the mainland.

But with few concessions won so far the movement has snowballed into wider calls for democracy and a halt to sliding freedoms under Beijing's rule.

But smaller groups of hardline protesters have fought increasingly violent battles with riot police and vandalised subway stations in scenes that have sent shockwaves through the once-stable financial hub.

Under a deal signed with Britain ahead of the city's 1997 handover to China, Hong Kong is allowed to keep its unique freedoms for 50 years.

Democracy activists accuse Beijing of reneging on those promises by ramping up political control over the semi-autonomous territory.

Activists and analysts say the movement will only end when some other key demands are met, such as an inquiry into the police, an amnesty for the nearly 1,400 people arrested and universal suffrage.

But there is little sign of Beijing agreeing to those demands. Plans by demonstrators to hold a large rally on Sunday have been rejected by the police.

Previous bans have simply been ignored by the masses and clashes with police have quickly followed.

Protesters have also called for rallies the next two weekends and a general strike starting in October.