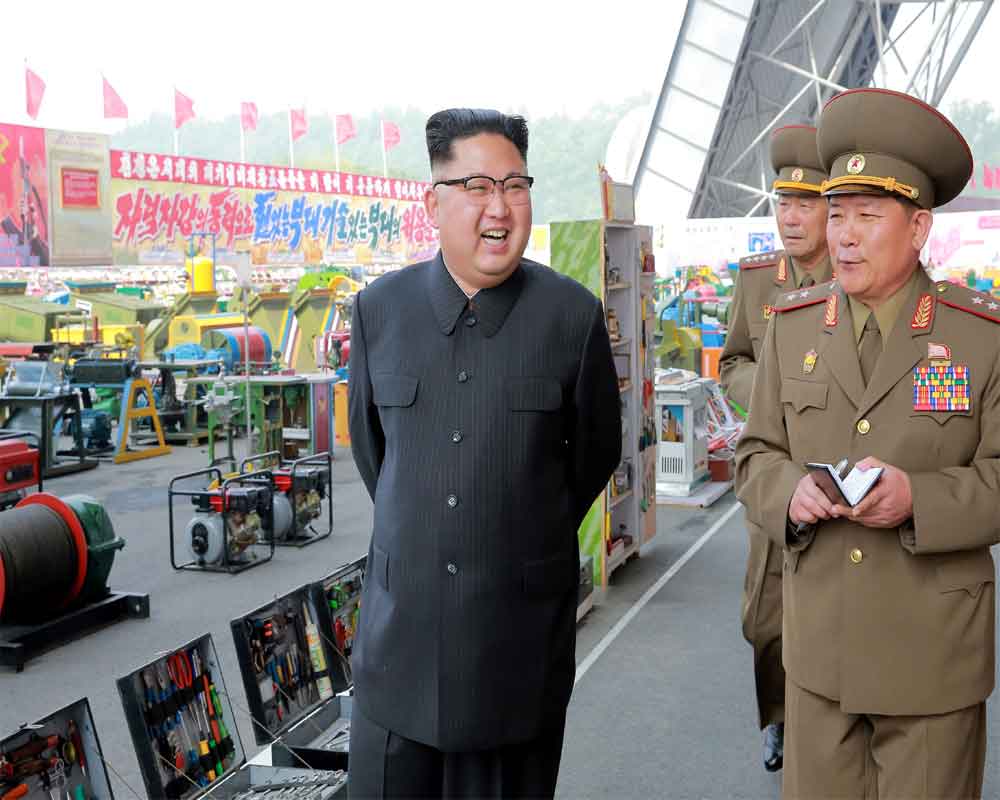 North Korea threatened Tuesday to carry out more weapons tests after it fired its fourth set of projectiles in less than two weeks following the start of joint exercises between the US and the South.

The rising temperature on the peninsula threatens to derail putative negotiations between Pyongyang and Washington, with the North saying the combined drills were a "flagrant violation" of the process.

Pyongyang has always been infuriated by military exercises between the South and US, seeing them as rehearsals for invasion, but in the past it has tended to avoid carrying out missile tests while the war games were taking place.

The speed of its statement Tuesday was also unusual, coming within an hour of it carrying out its launch, rather than its usual practice of a day later.

The North fired "two projectiles that are assumed to be short-range ballistic missiles" from South Hwanghae province on its west coast, Seoul's Joint Chiefs of Staff said in a statement.

They flew around 450 kilometres across the peninsula and into the East Sea, also known as the Sea of Japan, reaching an altitude of 37 kilometres and a speed of "at least Mach 6.9", they said.

That puts them around the middle of the range of the projectiles that have been fired by the North four times in the past 12 days.

Seoul has described most of them as short-range ballistic missiles -- the North is banned from ballistic missile launches under UN Security Council resolutions -- while Pyongyang has said some were a "large-calibre multiple-launch guided rocket system".

The latest launch came after the South Korean and US militaries began mainly computer-simulated joint exercises on Monday to test Seoul's ability to take operational control in wartime.

Less than an hour after the North's weapons test, an official of its foreign ministry said the drills were "an undisguised denial and a flagrant violation" of the diplomatic process between Pyongyang, Washington and Seoul.

All joint drills between the South and the US were "aggressive war exercises simulating the surprise and preemptive attack on the DPRK", the spokesperson said in a statement carried by the official KCNA news agency.

"So we are compelled to develop, test and deploy the powerful physical means essential for national defence," the official added. "The US and south Korean authorities cannot counter this even though they have ten mouths." The North attacked its neighbour in 1950, triggering the Korean War, but has long argued it needs nuclear weapons to defend itself against invasion from the US.

Jeong Young-tae, director of the Institute of North Korean Studies in Seoul, said that the North's weapons tests during the drills were a "bold move" that "may indicate that it is now much more confident in its military capabilities than it used to be".

"The North is now showing -- in a very blunt manner -- that it will take countervailing measures if the US and South Korea continue with these joint annual drills," he told AFP.

After a year of mutual threats and mounting tension, US President Donald Trump and the North's Kim Jong Un held a historic summit in Singapore last year, where both leaders signed a vague pledge to work towards "denuclearisation of the Korean peninsula".

A second summit in Hanoi in February broke up amid disagreements over sanctions relief and concessions from the North.

Trump and Kim agreed to resume nuclear talks during an impromptu June meeting in the Demilitarized Zone that divides the peninsula, but that working-level dialogue has yet to begin.

Analysts say the military manoeuvres on both sides could see discussions pushed back until the autumn, and Pyongyang signalled Tuesday that it was in no mood to talk.

"A constructive dialogue cannot be expected at a time when a simulated war practice targeted at the dialogue partner is being conducted," said the foreign ministry spokesperson.

"There is no need to have a fruitless and exhausting dialogue with those who do not have a sense of communication," they added.

After the Singapore summit, Trump made a shock announcement halting joint drills, adopting Pyongyang's own description of them as "provocative" at an extraordinary, freewheeling press conference.

And the allies' biggest annual drills, Foal Eagle and Key Resolve, which took place every spring and involved tens of thousands of troops, were replaced with a shorter "Dong Maeng" or "Alliance" exercise in March.