Trump: It looks like Iran hit Saudis, no military option yet

Trump: It looks like Iran hit Saudis, no military option yet 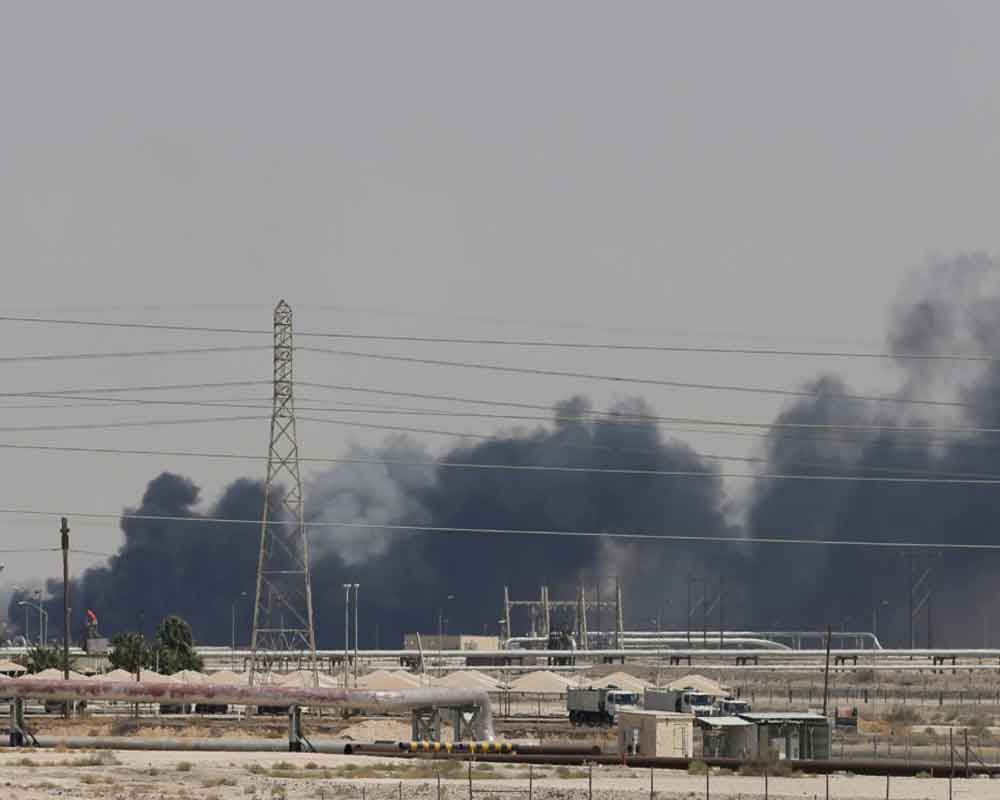 President Donald Trump declared Monday it "looks" like Iran was behind the explosive attack on Saudi Arabian oil facilities.

But he stressed that military retaliation was not yet on the table in response to the strike against a key US Mideast ally.

But Trump put the brakes on any talk of quick military action — earlier he had said the US was "locked and loaded" — and he said the oil impact would not be significant on the U.S., which is a net energy exporter.

The Saudi government called the attack an "unprecedented act of aggression and sabotage" but stopped short of directly pinning blame on Iran.

Trump, too, had talked more harshly at first. But by Monday afternoon he seemed intent on consultations with allies.

"That was an attack on Saudi Arabia," he said.

"It wasn't an attack on us, but we would certainly help them," he said, noting a decades-long alliance linked to US oil dependence that has lessened in recent years. The US has no treaty obligation to defend Saudi Arabia.

Trump said he was sending Pompeo to Saudi Arabia "to discuss what they feel" about the attack and an appropriate response.

One US official, speaking on condition of anonymity to discuss internal deliberations, said the U.S. Was considering dispatching additional military resources to the Gulf but that no decisions had been made.

The US already has the USS Abraham Lincoln aircraft carrier battle group in the area, as well as fighter jets, bombers, reconnaissance aircraft and air defenses.

Trump, alternating between aggressive and nonviolent reactions, said the US could respond "with an attack many, many times larger" but also "I'm not looking at options right now."

American officials released satellite images of the damage at the heart of the kingdom's crucial Abqaiq oil processing plant and a key oil field, and two US officials said the attackers used multiple cruise missiles and drone aircraft.

Private experts said the satellite images show the attackers had detailed knowledge of which tanks and machinery to hit within the sprawling Saudi oil processing facility at Abqaiq to cripple production.

But "satellite imagery can't show you where the attack originated from," said Joe Bermudez, an expert at the Center for Strategic and International Studies who examined the images.

"What the photos indicate is that someone planned a sophisticated, coordinated attack that really impacted the production of oil at this facility," he said.

The U.S. Alleges the pattern of destruction suggested Saturday's attack did not come from neighboring Yemen, as claimed by Iranian-backed Houthi rebels there.

A Saudi military alleged "Iranian weapons" had been used.

The Saudis invited United Nations and other international experts to help investigate, suggesting there was no rush to retaliate.

Jon Alterman, the chief Middle East expert at the Center for Strategic and International Studies, said the Saudi caution reflects the kingdom's wariness of taking on Iran.

"I don't think there's a great independent Saudi capability to respond," he said.

"You don't want to start a war with Iran that you don't have an idea how you're going to end."

In New York, the new US ambassador to the United Nations, Kelly Craft, condemned the attack and said that "emerging information indicates that responsibility lies with Iran."

In a series of tweets after meeting with Trump and other senior national security officials, Esper said the administration was working with partner nations "to address this unprecedented attack and defend the international rules-based order that is being undermined by Iran."

Iran rejected the allegations, and a government spokesman said there now is "absolutely no chance" of a hoped-for meeting between Iranian President Hassan Rouhani and Trump at the UN General Assembly next week.

"Currently we don't see any sign from the Americans which has honesty in it, and if the current state continues there will be absolutely no chance of a meeting between the two presidents," spokesman Ali Rabiei said.

Downplaying any talk of imminent US military action, Vice President Mike Pence's chief of staff, Marc Short, told reporters at the White House that Trump's "locked and loaded" was "a broad term that talks about the realities that" the US is "safer and more secure domestically from energy independence."

The new violence has led to fears that further action on any side could rapidly escalate a confrontation that's been raging just below the surface in the wider Persian Gulf in recent months.

There already have been mysterious attacks on oil tankers that Washington blames on Tehran, at least one suspected Israeli strike on Shiite forces in Iraq, and the downing of a US military surveillance drone by Iran.

Those tensions have increased ever since Trump pulled the US out of Iran's 2015 agreement with world powers that curtailed Iranian nuclear activities and the US re-imposed sanctions that sent Iran's economy into freefall.