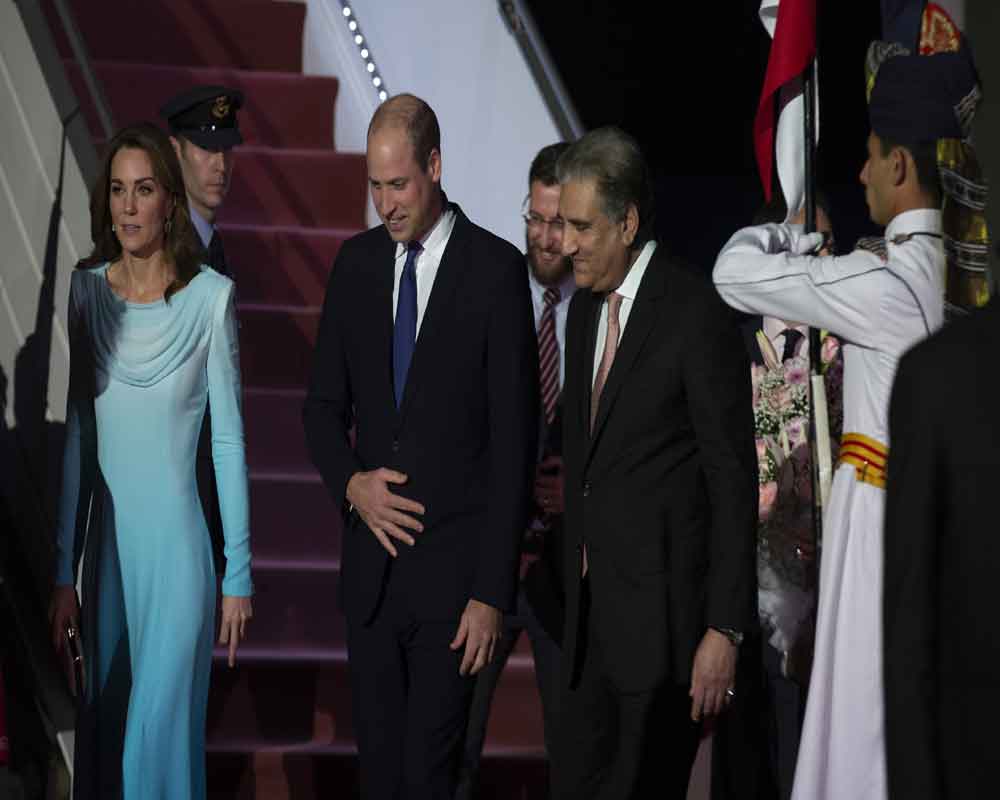 Prince William and his wife Kate Middleton on Tuesday met Pakistan Prime Minister Imran Khan and President Arif Alvi as they began their visit to the country, described as the "most complex" royal trip to date.

The Duke and Duchess of Cambridge, both 37, were received by Khan at the Prime Minister House, where a lunch was hosted for the guests, Dawn News reported.

Prior to meeting, the couple was received by President Alvi and his wife Samina Arif at Aiwan-i-Sadr.

The president commended the royal couple for their endeavours to raise awareness about mental health, climate change and poverty alleviation, a press release from the president's secretariat said.

The Duke of Cambridge thanked the president for the warm welcome and hospitality extended to him and his entourage. The royal couple appreciated the initiatives undertaken by the Pakistan government to combat climate change and to alleviate poverty, the statement said.

Duchess of Cambridge Kate, who earlier donned a royal blue kurta, changed into a green and white attire for the formal receptions.

Earlier, the couple visited a girls' school here and interacted with students.

They arrived in Islamabad on Monday, the first royal trip to the country in more than a decade.

The couple visited the Model College for Girls located in Islamabad. The college is a government-run school for disadvantaged from four to 18-year-olds, benefiting from the Teach for Pakistan programme based on the UK's Teach First scheme.

The school administration briefed the royal couple, who are strong advocates of girls' education, about the school and they were also apprised about education system in Pakistan.

During their five-day visit, the royal couple is scheduled to visit Northern Areas and Khyber Pakhtunkhwa besides capital Islamabad and Lahore.

Willaim and Kate will also visit the scenic Margalla Hills in the foothills of the Himalayas, Geo News reported.

Last week, Kensington Palace called the five-day trip "the most complex tour undertaken by The Duke and Duchess to date, given the logistical and security considerations".

The visit, which will end on October 18, has been organised at the request of the United Kingdom's (UK) Foreign and Commonwealth Office.

This is the first royal tour to the country since 2006 when Prince Charles and Camilla, the Prince of Wales and the Duchess of Cornwall, travelled to Pakistan.

In 1990, Princess Diana, William's mother, visited Pakistan to participate in a fund-raising event for a cancer hospital built by Khan.