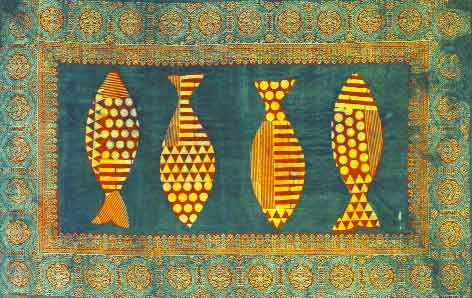 Artist Shelly Jyoti’s latest exhibition focusses on Mahatma Gandhi’s ideology of nation-building for creating a moral and peaceful society, which is even relevant in the 21st century. By Team Viva

Using the motif of fish, both as an individual entity and as a collective force, artist Shelly Jyoti, in her solo exhibition — Bound by Duty: An Idea of Swaraj and Collectiveness — explores the biggest challenge that mankind faces today — the disconnect between economic development and ecological well-being. “Ecology is understood both as man’s outer and inner environment. Economic progress of the kind being pursued in India and elsewhere in the world has become an end in itself. It has been separated from ethics and righteousness. It stands in conflict with man’s responsibility towards ecology, nature, his own community and other communities of the world,” she says.

The artist uses the imagery of micro-organisms in water, such as trillions of tiny fish collaborating together, displacing water to create oceanic currents, waves and turbulence in an undersea environment. She examines the idea of ‘collectiveness’ and ‘collective impact’ that can bring about a social change with evolved and spiritually self-aware communities.

The exhibition includes a 80-feet-long site-specific installation of four panels, 30 new Ajrakh art scrolls on Khadi, multimedia spoken word poetry and a short film on making of Swaraj and collectiveness.

Speaking about the majestic installation, she says, “The 80-feet long installation represents sequential movement and alludes to the nature of time itself. It calls to mind the endless ebb and flow of tides, the continuous revolution of the sea and its state of perpetual motion. The gradually folding of fish and an amalgamation of indigo and blue represents water as the beginning and end of life. Civilisation and Collective Forces are inspired by the idea of collective community emphasising human worth in comparison to modern civilisation, where the principle of Purusartha (Dharma, Artha, Kama, Moksha) becomes a search for fulfillment in the present materialistic world, which emphasises on luxury and comforts.”

Another site specific work in paper, The Print: Hind Swaraj, seeks to reach out to masses with a text that was written 100 years ago and exploring its relevance today.

She says, “These works are inspired by Gandhi’s seminal anti-imperialist text Hind Swaraj, written in 1909. This exhibition examines elements of Gandhi’s critique of modern civilisation, noting his emphasis on an evolved ethical and spiritual self for creating an alternative perspective of a better world. To bring social revolutions, for creating peaceful societies, the idea of self-rule or self-control needs to be experienced uniquely by each individual and ultimately achieve self-transformation.”

Jyoti focusses on Gandhi’s ideology of nation building for creating moral and peaceful society, relevant even in the 21st century. Inspired by the idea of social responsibility, she tries to understand the meaning and importance of the relationship between self, societies and social transformation in our fast-paced technology-driven world.

“I was seeking a response to the idea of swadharma as a notion of patriotism. I also wished to understand the ways in which a modern civilisation such as India, that has achieved so much economically and has become such a significant culture globally, could still connect with seventy per cent of the rural population that remains illiterate. It is in this context that I eventually decided to re-read key writings of Gandhi for insights, as in his world the ethical and spiritual self is embedded in the realm of political struggles for justice,” she says.

Mahatma Gandhi’s timeless ideologies have been at the core for more than a decade now. Using Khadi as canvas, Ajrakh printing and dyeing as palette and intricate needlework as her brush strokes, Jyoti continues her exploration of Bapu’s concept of Swaraj.

(The exhibition is on from September 14 to 27 at India International Centre.)