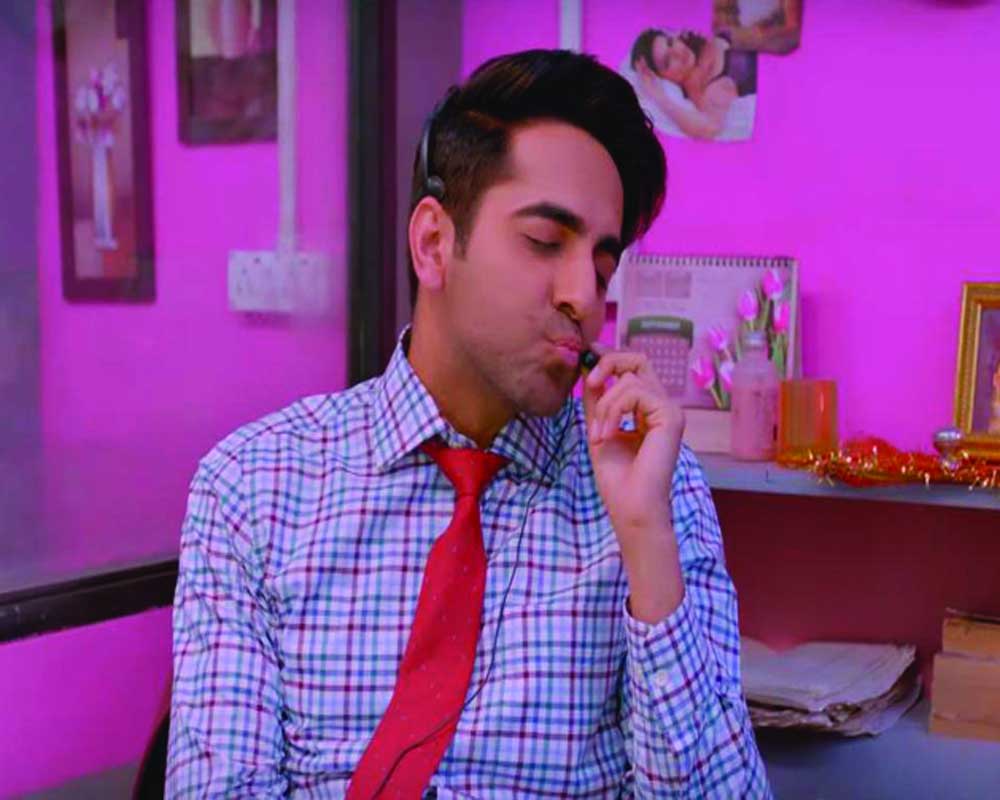 When I greet him by saying, “Hi dream girl with bushy eyebrows! (going by his Instagram bio),” actor Ayushmann Khurrana laughs and recalls how at 14, he used to call his first girlfriend to talk to her. It was the early 1990s and as those who have lived in the time know that a single landline sufficed for the entire family. The girl’s father answered the calls and Ayushmann spoke in a woman’s voice, pretending to be his girlfriend’s female friend. The girl’s father did not suspect a thing when he heard his (turned her) voice and promptly handed over the phone to his daughter. “And we used to talk for hours because her dad thought that she was talking to a girl,” says the actor and bursts out laughing even before we start asking questions. Well, who knew a little stint in his teenage years would come back to him as one of his roles today?

For his forthcoming film Dream Girl, this is one of the first things Ayushmann recalls when we ask him about how he established a command over the feminine voice he uses to make prank calls in the film. He also points out that he has done radio commentary in the past, “which enabled me to make prank calls. That also helped. But of course, this was not something that I was used to. I did practise to be fluent in it. And mostly, I dubbed and recorded my voice in a studio so that I could get multiple takes of it. So now it sounds so much like a girl that it doesn’t even look like it’s dubbed (laughs).”

The trailer of the film has left the audience anticipating what exactly it has to offer as Ayushmann is seen essaying roles of Sita and Radha in Ramlilas and engaging in sex-talk with strangers on the phone during his job at a call centre. The actor says, “In our country, most of the actors who are playing characters of women in Ramlilas in small towns are males. There are many men who play the role of Sita. So this is also a story of one of those guys and I am that guy here. My character has the talent of being able to speak in both male and female voices. So he just explores it to earn money. But in the end, it’s not bound to just adult chat or sex-talk but it is also about how I enable lonely people to have fun. They are looking for companions. It’s a comedy but it certainly touches some souls with its humour.”

In one of the scenes in the trailer, Ayushmann is seen playing Draupadi and during the time of her vastra haran or the unveiling of Draupadi in the court, he yells, “#MeToo agar Mahabharata ke time par hota na, toh sabse pehle tum sab andar jaate (If #MeToo happened during the time of Mahabharata, you all would have been jailed first.)” It appears to be funny at first but strikes as an epiphany later about how the film enables a man to see the world from a woman’s point of view when he puts himself into her shoes. So what was Ayushmann’s idea of it? He says, “I feel that empathy is very important. When you know a woman personally, up close and inside out, as a friend, a brother or a husband, you realise the issues that she is facing in a social set-up. Hence, the film is also about gender fluidity. It says that a man should not think twice if he wants to dress up like a woman. No one should be stopped from doing that. Similarly, no one should stop a woman from dressing up like a man.” It’s 2019 and the actor believes that we should have that liberty as it’s our “prerogative” to do that.

However, Dream Girl, he tells us, is not a film which tries to give a message. “It’s funny and humorous. Though there are certain lines which will briefly touch and go. But overall, it is just for laughs. It is the funniest film that I have done till now.” The film is set in Mathura and the best part about shooting for it, for Ayushmann, was the weather as it was during the Winter.

The recent films and even web series are evidence that more interesting plots are coming from small towns and middle-class family scenarios in our country, unlike the rich, affluent people in metro cities which inhabit a typical Karan Johar film. Some examples being Stree, Badhaai Ho!, Luka Chuppi, Jabariya Jodi and more. Why? It’s certainly because of their high relatability factor and connect with the audience. And the theme of realism. However, Ayushmann believes that a good story is not place-specific. “It doesn’t have anything to do with a small town or a metro city. It is also because 70 per cent of the nation lives in small towns. I am also from one of them. Even though I have stayed in Mumbai and Delhi but eventually, I am from Panchkula, a small city near Chandigarh. So when people from such places go out and watch these films, they connect to them. But there are also films like Dil Dhadakne Do, which give a glimpse of the urban lifestyle, but do fairly well too. So venues don’t really matter as long as the stories are good,” says he.

Talking about the realistic portrayal of issues in films today, do films with a message actually create an impact on society? A recent example being his Article 15, which presented a take on the discriminatory caste system in India. And Ayushmann agrees that it does: “The representation of these issues do make an impact on society. It reaches to a wider audience collectively especially to those for whom the issue of casteism doesn’t really exist. But in the larger realm, it still does. It acts as an eye-opener for most of them.”

It was certainly a film which not only might have created an impact on the audience, but provided some “great learning” to the actor as well. He tells us how and what he learnt the most from it. “It was empathy more than anything else. Getting into that character was like knowing the situations of a society in a country. If you know that, it will help you build that empathy towards the downtrodden. It was also about acknowledging the casteism in our country. Probably, I was more aware than the character on-screen about the issue because I come from the street theatre background and have done plays on social issues in small towns, which really helped me to get into the character. It was the only dark film that I have done till date and it was quite a learning experience,” he adds.

The actor, who is currently living a dream after his successful three blockbusters and winning a National Award, tells us how he balanced the roller-coaster of a ride his life has been during the past year. It was extreme as he had to balance swinging emotions — his wife’s (Tahira Kashyap) illness and two back-to-back hits (Andhadhun and Badhaai Ho!). “I have realised that life is a great leveller. It gives you something and also takes something away from you. There are equal phases of sorrow and happiness. There are tough times but good times too exist. At the same time, everybody has a void in their life and they have to accept it as a part of it. And at the end of the day, they have to keep going with the circumstances. But we just need to be in a happy state to go through the challenges ahead. So that’s about it. I am glad we came out of that,” says he.

However, there certainly comes a pressure after being honoured with a National Award, as it creates a particular benchmark for an actor to not fall below it, requires him/her to keep doing good and not ‘disappoint’ the viewers. “There is nothing like that,” he laughs and adds that it’s a “happy pressure, which will give me the courage to choose scripts which are more radical. And I always follow my gut and intuition. I have been doing that for many years now.”

(The film releases on September 13.)