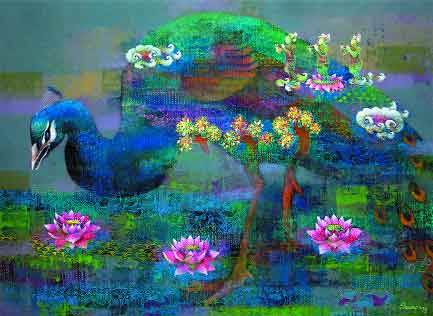 Artist Shampa Sircar Das, through her series of artworks titled Antardhwani, recreates mythical tales weaving in the elements of flora and fauna. By Uma Nair

Weaving in elements of flora and fauna is not a first for artist Shampa Sircar Das as she has had a felicity with these for many years. But what still enchants is the manner in which she brings in miniature traditions to embellish her forests with animal/bird and man/woman combinations beside flowers and trees.

Centering around Indian mythology, folklore and an intrinsic love for the beauty of nature, her Antardhwani at Chawla Art Gallery brings three artworks into fore — Mayura, Mriga and Vriksha. They stand apart in their depiction of the beauty of mother Earth and the songs and narratives that can unravel and keep it blooming.

It is believed that Mayura or the peacock was created from one of the feathers of Garuda (a bird in the Hindu mythology and a carrier of Lord Vishnu). It is depicted as a mythical bird which had killed a snake. According to many Hindu scriptures, it symbolises the cycle of time. Sircar creates Mayura as a beauteous creature, full of grace and contoured classicism, replete with a deep adoration of the forest and its habitat. Mythology says that peacocks once had dull tail feathers. In a battle between Ravana and Lord Indra, the bird had spread its feathers wide open to allow Indra to hide behind them and thus wage a war. Indeed, it was able to save Indra, in return for which the lord made the peacock’s feathers iridescent.

Sircar’s Mriga with fertile antlers from which a veritable forest grows is another masterpiece. The deer stands tall, strong and majestic as it looks at the many predicaments that whirl around it. Sircar unconsciously heralds man’s selfishness and the power and uncanny grace of the animal in her painting.  In the Vedic texts, the deer becomes a metaphor of the restless mind that is pinned to the sky by Rudra, the Vedic form of Shiva. Tamil story images of Shiva often show him holding a deer in his hand, thus relieving the ‘mind-deer’ of anxiety.

In Hindu mythology, the Aitareya Upanishad tells us that the goddess Saraswati takes the form of a red deer called Rohit. Saraswati is the goddess of learning, so learned men use deer skin as clothing and mats to sit upon. A golden deer plays an important role in the epic Ramayana.

Deer are associated with fertility in many Native American cultures. In some Mexican tribes, the first parents of the human race were originally deer. Deer are sacred animals to many tribes of the southwestern United States too; they are believed to have sacrificed themselves to feed the people, or are considered caretakers of the earth. Deer songs and dances are common throughout this region, with the deer frequently serving as a symbol of the people. In the Huichol tribe of central Mexico, deer are especially sacred and are associated with traditional spirituality.

Indian poets of antiquity  used the deer to embody our desires, and the hunting of the deer as a metaphor for yoga, with the bow and arrow representing simultaneous balance and focus. This work recalls all these epithets and is quite an epiphany.

Resplendent in red Sircar’s Vriksha is both a woman and a tree. If Hermann Hesse said trees are sanctuaries, we also know that trees are sacred in India and often associated with a god or a goddess. Some scholars believe that it is the tree that was worshipped first, maybe for its medicinal or symbolic purpose. Trees are an integral part of a deity’s symbolism. The mango tree, for example, is associated with the love-god Kama, the tulsi plant is dear to Vishnu, bilva is associated with Shiva worship, blades of dhurva grass are offered to Ganesha, neem or margosa is sacred to the mother goddess, coconut and banana are associated with Lakshmi. The banyan tree is associated with Yama, the god of death and the tree is often planted outside the village near crematoria. It is believed to be the abode of spirits. Indians knew the banyan tree as the Vata-vriksha. When the British came to India, they noticed that members of the trading community would sit under it and named it banyan, a  derivative of bania. Technically, ficus benghalensis, the banyan belongs to the fig family.  Pipal is also a variant of fig, which became especially popular in Buddhist times because it was under this tree that Lord Buddha attained enlightenment.

The tree also represents time as well as space. The world is, according to Hindu, Buddhist and Jain mythologies, shaped like a disc that rests on the back of a turtle and is surrounded by oceans of milk and treacle.Vriksha then is about the beginning and the end, indicating the radial nature of Indian thought. The seed that springs from the tree  represents stillness and the elemental bindu from which all things emerge.