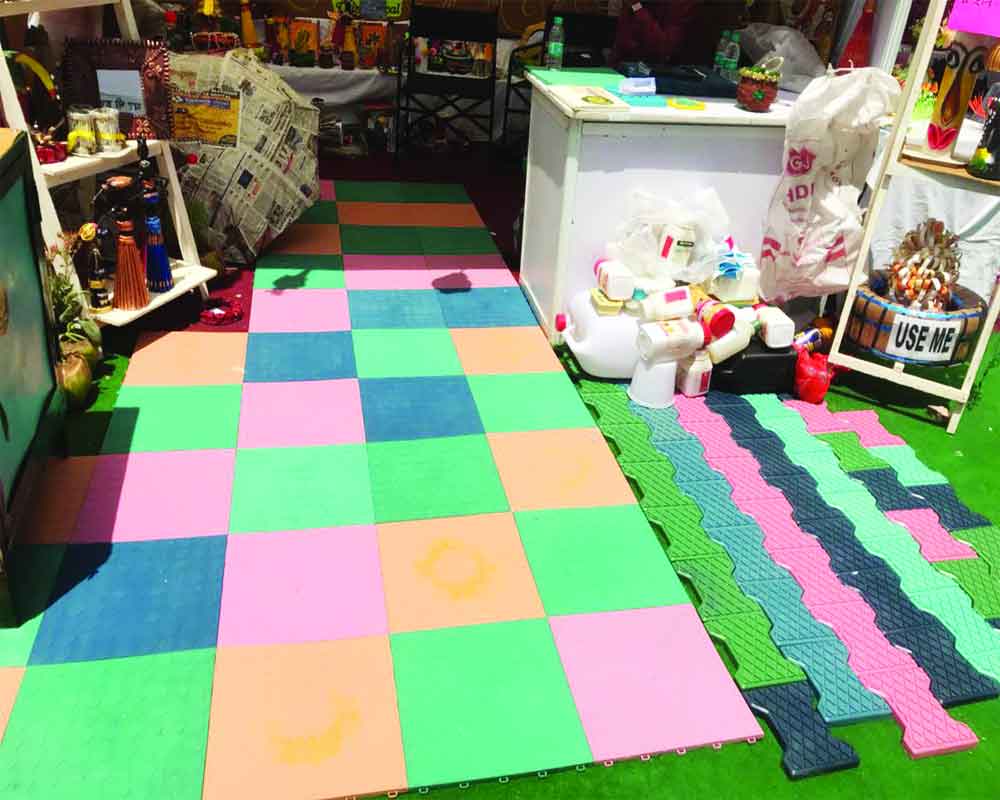 Sustainability is not just a part of global debates today but people’s profession and entrepreneurial ideas too. And the battle against plastic has just become one where the focus has shifted to using its waste, which is choking landfills, oceans and cities. Chahak Mittal talks to some entrepreneurs who are engaged in the good fight

Do you know what trekkers and hikers find when they finish their summits at major mountain ranges? A sense of tranquility, peace and victory, one may answer. However, in reality, it’s all kinds of plastic waste — that neither degrades nor gets disposed. When a few years ago, Paras Saluja, founder and director of Shayna ECOunified, reached the Everest base camp, successfully completing his summit and saw plastic waste being dumped on the “world’s most beautiful place,” a realisation hit him. He wanted to bar not the use of plastic, but the disposal of it, completely. But how? He wondered. Meanwhile, Vietnam was his next travel destination. During one of his walks through a food street, which was completely based on the use of plastic products, he “surprisingly” found out the next morning that there wasn’t a trace of filth of that plastic and all the waste was very carefully disposed. It was done through a van that took the rounds and collected waste. It was then recycled and used for miscellaneous purposes. An epiphany then struck him — “if a small nation like Vietnam could so well and collectively manage their plastic waste disposal, why cannot we despite being a country with such a humongous population?”

Today, his company uses plastic waste materials and turns them into high performance materials in the form of High Density Composite Polymer (HDCP) tiles and blocks. These tiles are weather-resistant, chip-resistant, acid-proof, durable and have better structural stability at a lower cost as compared to conventional materials in addition to reduced plastic dumping. He says that generally, even the waste plastic products, which are made from recycling the polymers, are dumped in the landfills eventually. They could be used for sometime but they do have an expiry date. “I wanted to create something that lives for 50 years. And the kind of plastic that we use can be recycled thrice. So if the tiles are damaged after 50 years, they could be recycled thrice post that too to manufacture new ones,” he says. And the bonus with these interlocking tiles is that they are “anti-microbial, antistatic and anti-bacterial.”

The Greater Hyderabad’s Municipal Corporation’s (GHMC) dog park was the first reflection of what they have been producing. And it’s not just the concept that the park is only meant for dogs, but also its bright green-pink-blue tiles on the pavements, which enhances the park’s vibe. Paras tells us that out of the seven types of polymers available for such use, they are utilising three types, which are also coloured. The plastic waste is segregated into three categories — Polypropylene (PP), High-Density Polythylene (HDP), and Low-Density Polythylene. They consist of disposable cutlery, chairs and tables and toys; PET bottles and their caps; and milk pouches, simultaneously. He says, “When you recycle this kind of plastic, it naturally gives out some or the other colour. And if we use particularly green or blue plastic, it gives out green and blue colour. However, we don’t go for pastel colours or even white or yellow, since they fade out easily. Though we also produce red coloured-tiles if the demand be.”

Another such organisation is the Dehradun-based Sustainable Green Initiative Foundation, which aims at producing bricks with the use of low-value plastic waste. Durgesh Raturi, founder and director, tell us that multi-layered plastic packaging is highly problematic and companies have not realised it in years. And hence, it came to him that they could use low-value plastic like Kurkure wrappers, regular-use polythene bags, Parle-G biscuit packets, etc. “These packets are usually double or multi-layered which make them even harder to recycle. The waste is collected through various sources and then heated and compressed with sand to be fashioned into a brick,” he says.

Listing the differences between cement-based bricks and these, he tells that these plastic waste-based bricks have the “compressive strength, which is almost twice as that of the cement-based ones. And, of course, emit less polluting chemicals and elements. “One great element about these bricks is that whatever wrappers or packets or plastic waste we receive is not even washed with water before its use. It’s directly put to use. Even if a wrapper is dirty with mud, we wouldn’t use water to clean it up. So we also have no-water-wastage policy.”

So where does he source the plastic waste from? The non-profit organisation aims to be more inclusive in terms of creating a space for a healthy environment. He says, “We source a lot of our waste from ragpickers. And one of the major contributors to our waste is the Jaivik Vasudha, a startup by two young boys who went door to door collecting plastic waste from people’s houses and giving it to recycling businesses. We have been closely working with them.”

Well, there would be multiple resources that we might be using in our daily lives and routines. We do not even care whether these will be available to us for the lifetime, as they are exhaustible. However, waste is something that would always be available in abundance. It will never exhaust. Natural resources will. Atiya Rakyan, chief Rawcycle officer at Raw Pressery, who, under their initiative #RawCycle, has collected 1.2 million plastic PET (polyethylene terephthalate) bottles to recycle and has recently launched the first edition of t-shirts, which are made of 95 per cent recycled plastic polyester and five per cent drift spandex.

Seven waste PET bottles are used to make one t-shirt. Talking about the process, she tells us that the bottles are washed, crushed and then chopped into flakes. She says, “They are later melted at 270 degrees and formed into chips and then extruded into yarn. The yarn is then woven into the fabric and then, coloured using eco-friendly processes. The entire process is very clean. We don’t use any kind of chemical-based dyes to colour the t-shirt, which is currently priced at Rs 1,000. There is no emission of pollutants which, unlike other cloth processing companies, are let into rivers and other water bodies.”

The idea to bring this up hit Atiya when at a cultural event, she saw numerous plastic bottles being dumped in, outside and around the dustbin. “Which would have ultimately ended up in landfills.” She believes that it’s been long that we have been using resources and throwing them after use. And now is the time to preserve that waste and use it to create non-perishable products. “Those bottles at weddings, which you think are of no use after the water/juice is being consumed, are a raw material for me. It’s a treasure. I can make a living out of it. We don’t need to look at it as trash anymore. It’s like gold in the dust,” says she, emphasising on the approach of designers, who “should be looking at other measures of creating their fabric. We can’t just keep growing and exhausting cotton for fabric anymore.”

While some may choose to sweep the environmental warnings under the carpet, The Rug Republic is fighting against environmental degradation by recycling plastics into... carpets. Aditya Gupta, founder, tells us how they are making outdoor and indoor art pieces while using minimum natural resources and now they have taken another giant leap by using recycled bicycle tubes, PET yarns extracted from recycled water bottles, recycled silk yarns, and other multi-fiber textiles to create unique rugs and carpets. “They are also cost-effective — though expensive than cotton, they’re cheaper than wool.”

While Paras tells us that depending on the size of the tiles, it may take about one kg of plastic waste to make four tiles or even two kg of plastic to make one, Durgesh points out that unlike other products which consume Rs 1 for one year, his product is for Rs 10 but for 50 years. Well, plastic recycling costs are indeed expensive but given their durability, they last more. The problem is its initial cost, which is high. And this leads to the question that when there are other good quality products available at cheaper prices (though not eco-friendly), how can these sustainable products get a proportionate share in the Indian markets and takeover people’s utility choices?