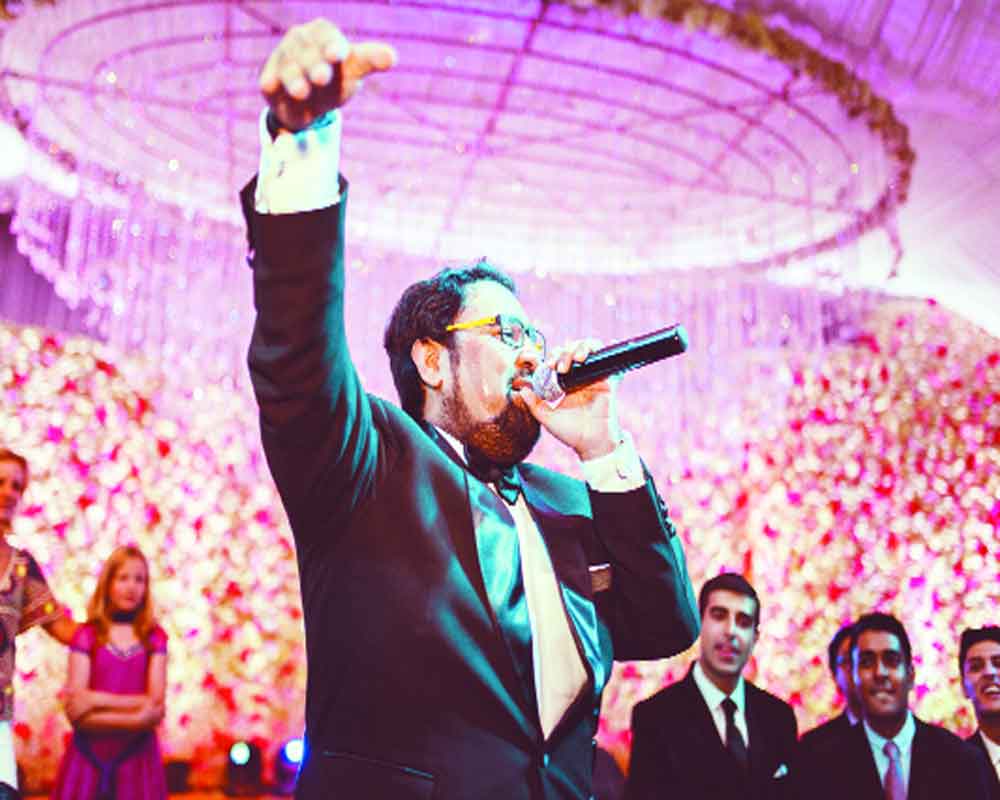 He never intended to invent “wedding rap.” It happened quite by accident. Turns out Siddharth Sood popularly known as MC Sid was making a living doing gigs when somebody asked him if he could perform at a sangeet and engage with the guests who were attending it. “I told him I could even rap in the bathroom, if he wanted,” he laughs, recalling the day he took up the challenge and how his livewire act in a grand Mumbai hotel gave him legitimacy as a wedding performer with a difference.

Siddharth feels that rap is the epitome of pop culture and as a genre is globally the biggest. He has been in the rap scene for the last 15 years and when he had started, people told him that this was just a phase, which would disappear once he grew up. “But, it didn’t,” he says and adds that much before he started rapping, it was already a culture in the US. “Whereas everybody here used to ask when was this going to end? When is it going to change? Is this even a genre of music? But most people didn’t realise that rap is here to stay,” says he.

Rap is an acronym for rhythm and poetry, he explains. It is just a different and musical form of poetry, which has been in our lives since the very beginning of civilisation. And it’ll go on forever. The rapper says, “This is going to stay forever because it’s a form of true expression where people are able to voice what they want to even if it is in terms of negativity of oppression. Earlier, rock and metal music used to have this kind of vibe. People who were rebellious used to listen to such music. Our parents used to say, yeh kya bakvas sun raha hai? (What rubbish are you listening to?) Now the difference is that it has become a lot more vocal.”

More than just spontaneity and having a freestyle, one also has to be musically inclined for the act to stay intact, he believes. He explains with an example, “Just the way there are different styles of swimming — front crawl, back-stroke, butterfly-stroke, breast-stroke and freestyle —  where the last one means that you can do it in any manner you want. And that is the truest form,” he says.

The rapper’s first step to make the art reachable to more people was audience engagement. He tells us how, “Gully Boy has happened only recently. However, earlier, people did not know what rap was. So, I had to engage with the audience to be able to make it engrossing so that people would enjoy it and follow it more.”

It’s obvious, he says, that he faced a lot of criticism and struggled to make a place for himself as an artist. He shares, “There was a lot of censure. My family members wouldn’t understand what kind of work I was into. My grandfather, at one point, began to think that I am fooling people at weddings. They wondered if this was even a job. My father was very concerned and thought I am a freeloader who just gatecrashes weddings. It was difficult to make them understand.”

He explains that even choosing the type of content to rap on at weddings was difficult since it couldn’t be the ones from Eminem or Yo Yo Honey Singh, which were full of slangs. And weddings are happy and fun. “So, it required a bit of homework. I spent some time with the family members. They told me little details of the family and introduced me to close relatives and friends. I had to make it personalised to not sound like something readymade. Rapping without expressing something doesn’t makes sense,” he says.

The rapper, who still raps at around 50 weddings a year, feels that the film Gully Boy is one of the best things to have happened for people who express themselves in this genre. “It has given an opportunity to many young rappers to proudly take it up as a profession. The film was evidence that rap is indeed something that could be seen and recognised as an art. Undoubtedly, it has motivated many children to follow their passion, which is great,” he says.

However, Siddharth feels that Indian rap has been a wholesome genre in the north India and is 10 times bigger than it is in Maharashtra. But the differences arise only in the kind of backgrounds we have. The culture has been the same all around. And only one part of it has been shown in the film. “They don’t come only from the slums or small, backward areas. It is not like what those rappers did has been the purest and truest form of rap, they just belong to a backward area and that is why they represented their problems like the angst of the youth through their lyrics. They reflect the reality of how they have faced exclusion throughout. Whereas, we belong to a well-to-do family and we would represent the same through our lyrics — fun and drama. What’s wrong with that? I’m here for that. It’s just the difference of where we come from,” he explains.

Siddharth believes that it completely depends on the society one belongs to. “We all have freedom of speech and expression. There is nothing wrong. It is just that the depiction of the film shows that rap is something which people in poverty rely on. It’s true to some extent. I highly appreciate that Naezy and Divine have grown out of their situation. But that doesn’t mean that I will always call out to how ‘I have come with nothing and will leave with nothing,’” he exclaims.

Ask him about the evolution of rap culture in India, he apprises us, “I have to give Yo Yo Honey Singh full marks. The story starts from there and then Badshaah, Raftaar and now may be Gully Boy.” He lauds Honey Singh when he says, “He created the concept that there could be rap in a song too. Gully Boy could be seen as an idea that threw light on the rap culture in India. Zoya Akhtar showed a different angle of it. So that the film became the story of an underdog.”