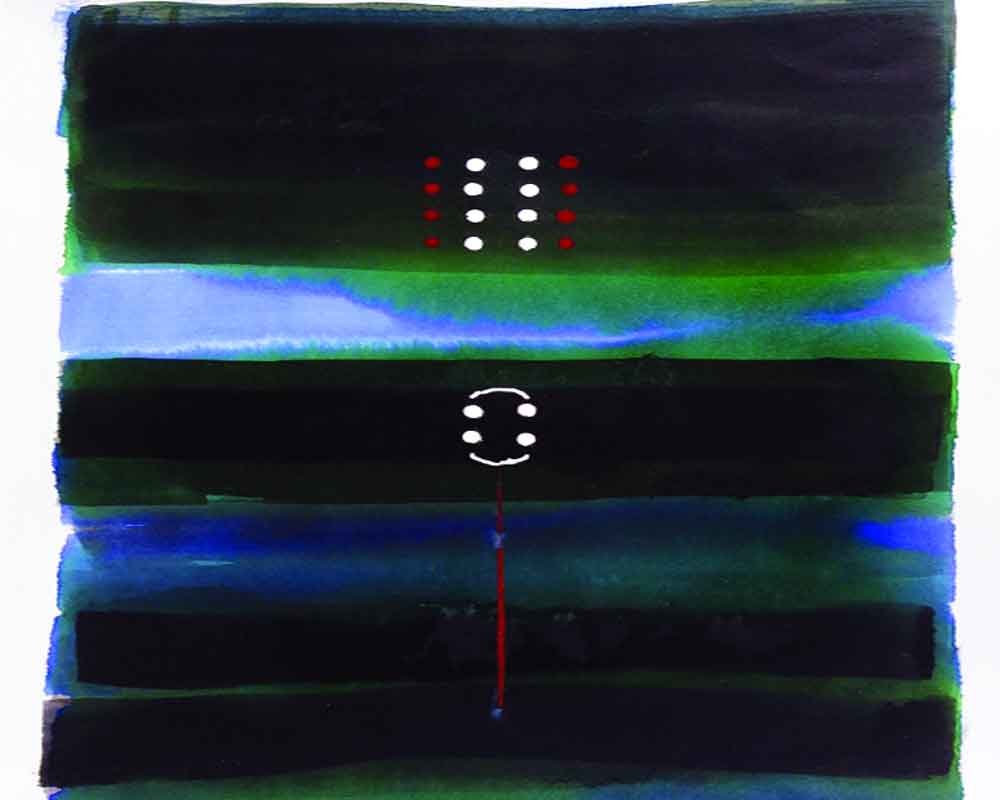 Fusing Indian and Western aesthetics, artist Ashok Gulati aims to redefine modern art by an amalgamation of abstraction and nature. By Uma Nair

It’s rare that I request an artist to come home and show me his/her works. And Ashok Gulati, who is also a filmmaker, was one such exception. His abstractions on paper reminded me of one of India’s finest artists, Sohan Qadri, and I was happy to know that the duo are close friends.

Gulati’s works on paper are light and lithe and he has been doing abstractions for more than 25 years. His handling of technique and opacity depends on the varying weight and shifting density of his lines traced through diffusion and interweaving brushstrokes to create remarkably refined depth and structure. He sometimes divides his singular zones with lines, which are geometric products of unconscious action, the artist’s poise, movement and twists of hand. Thus, interacting with the lines on a sheet of paper to produce a serene space inside the mind of the viewer.

Ashok says, “I paint with my will. My mood is about solitude and the different sensations I feel while putting the brush to paper, my handling and my strokes reveal not just my humble wristwork. But I believe that spaces and flowing lines are more than just skills. They are also about one’s own intuition.”

Sometimes his works have undulating lines that verge on the spiritual. Ashok’s paintings are imbued with his inner voice and this expression from the heart further incorporates natural imagery as well. The artist at once affirms that abstractions are actually distillations of heartfelt reactions that travel, absorb and respond to nature. He takes the essence of an inner landscape from memory, which could be fragments of mountains and streams, and pours out his heart on the sheets of paper through abstract techniques.

Taking nature’s rhythms and fusing it with the artist’s heart or ideas is to show the creator's imagination, learning and personality on the canvas. Ashok melds together the expressionist spirit of various Western media to reinterpret ‘abstraction’ and, in doing so, creates small mappings in solitaire.

His yellow and tangerine tinted work flows like silk and extends to the inner realms of a mantra. We can think of a sunset — on the edge of river or on the paths of a mountain — and perhaps think of the river gods making way between the mountains. The soothing and rolling  ranges of the flow of the river, Ganges, mirroring a sunset are rendered in some  works through the varying shades and swathes of yellow and tan, while the moss green, dark bronze and greyish-green sculpt the outlines of fantastical rock formations, roaring rivers and eccentric saplings. One cannot help but be reminded of the sages and tales that bring into being a space that is out of this world and utterly articulate — the artist’s poetic artistry working in concert with his heart in his small studio in Vasant Kunj.

His small studies of abstraction give us a glimpse of the artist’s amalgamation of his spirit and the nature. This is expressed through the medium of painting to revolutionise ‘Abstract’ representation and redefine the substance of expressionism in modern art while fusing Indian and Western aesthetics.