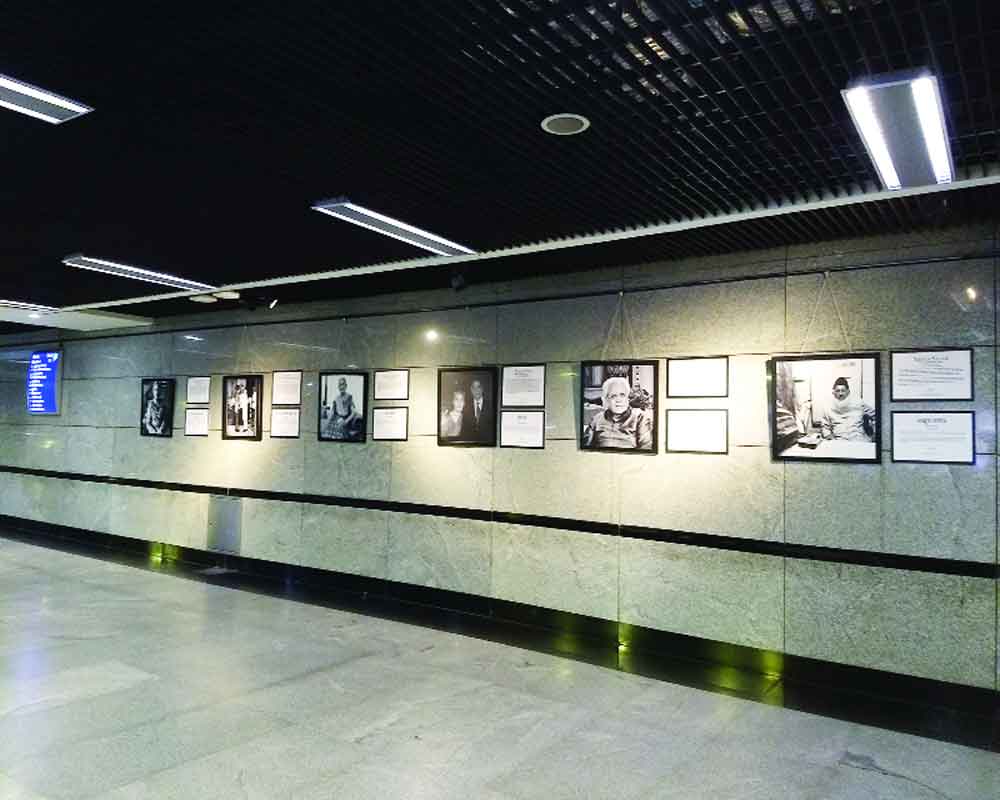 The 1947 Partition Archive has set up two exhibitions at the Mandi House Metro Station, which recall stories of nine women during the troubled times and revive memories. Chahak Mittal discovers narratives and the reason for choosing a metro station for the display

Sepia-tinted images of trains, practically bursting with people who cling on to every available space, with their belongings spilling out, are the first things to pop in your mind when you say the word Partition. Since the day the Radcliffe Line was announced, trains started streaming into stations with a deathly silence, carrying corpses of refugees and splashed with blood on their walls. Those were known as the ‘blood trains’, in which people crossed the newly-formed border and very often, a stream of red would would seep from under the carriage doors. But it was the main and the most chosen modes of commuting during those troubled times. And it is not just a mere coincidence why the 1947 Partition Archive chose Mandi House Metro Station to put up two photograph exhibitions — Women of Partition, curated by Aanchal Malhotra; My Heart Belongs in Delhi, curated by Erin Riggs and Ritika Popli and designed by Arshiya Lokhandwala.

When commuters change their routes from the violet and blue lines at the station, they can notice a series of life-sized black-and-white photographs on the walls. They are of a few women in their 20s and the another series is of small and big photos representing memories from Delhi in 1947.

Guneeta Singh Bhalla, founder of the archive and curator, says, “There was a big factor of symbolism around trains here since a number of people commuted via them during the Partition. They were an important part of that period of migration. And public attention to such stories is important.”

Some of the stories read: ‘My maternal grandparents were killed in a small village called Mukhtasar during the Partition riots. My mother, who longed to see them, never quite came to terms with their death.’ ‘My father was posted in Algon Kahlon, near Khem Karen, when the Partition was announced. He sent knives for me and my sister for our protection.’ ‘While travelling from Ferozepur to Jhang, across the newly-made border, we saw a bare leafless tree, from which hung the dead bodies of five men.’ ‘Years after the Partition, I visited Lahore and reunited with a friend from college. The Partition was sad because it separated friends and family on both sides of the border. We had never expected such a thing to ever happen.’

Though there have been numerous exhibitions that have been set up by the archive, she says that these are parts of exhibits that haven’t been shown in a public space before. When we ask Guneeta as to why they chose only these nine stories to be displayed, she says, “Well, because several of thousands of them wouldn’t have been accommodated there (laughs).” Talking about the selection criteria, she says, “They were chosen on the basis of diversity of religion and ethnicity. We had to bring together people from different spheres and immigrants from different locations.”

The next exhibits represent memories from Delhi during the time of Partition. Among many others, it features Abdus Salam, who currently runs a bookstore, which was founded by his father in 1937, near Jama Masjid. He remembers how he and his family had travelled to Multan, when the riots broke out, on a plane without seats. People had sat on their luggage. They felt that they would eventually return in some time. However, it’s only five years later in 1952 that they got the “permission” to return to Delhi.

It was in 2009 when Guneeta first began collecting oral histories and stories from people who had witnessed the communal riots in 1947 around the world. Why does she think that Partition is relevant and important to be revived even after 73 years of our independence? She points out that “Our people went mad” has been often heard. Yet, after gathering thousands of oral histories, the findings showed how most people “did not” participate in the violence and were largely innocent victims. “In addition, a vast majority surprisingly did not even harbour ill feelings toward the ‘other’ religion. Importantly, in a significant finding, for the vast majority of the cases, victims did not recognise their attackers. And so, contrary to popular understanding, friends and neighbors didn’t kill each other indiscriminately. People didn’t turn on each other suddenly, in the name of religion, but rather offered protection to each other,” she highlights and adds that it’s an integral part of communal tensions that are taking place even today. They need to be talked about constantly in order to keep learning from them.

For someone, who has collected 8,000 stories of Partition witnesses, how has it transformed or shaped her as both a historian and an individual? She disagrees with what Winston Churchill had “famously proclaimed” — ‘Hindus and Muslims could not live with each other.’ She says that one of the most important findings that she came across through these interviews was that the violence and separation of Muslims from non-Muslims was not an “inevitable” outcome. She adds, “It is that fringe elements were aroused by political rhetoric and their criminal acts victimised all of humanity in those regions. Disarray in the armed forces and a temporary lull in governance sparked the massacres which, it appears, could have been prevented.”

She also points that we are still impacted by how Partition led to a “massive loss of life and livelihood and was a big hit to education and economies in South Asia in many ways. And even though many of these aspects might have not been thoroughly studied yet, we cannot deny the impacts. Mass trauma from that period still lingers amongst millions.”

The archive is yet to get on the field at the station to get the responses from the passersby, she informs.

(The exhibitions are on till September 30.)