Af in Taliban’s hands! India must come to terms

Af in Taliban’s hands! India must come to terms 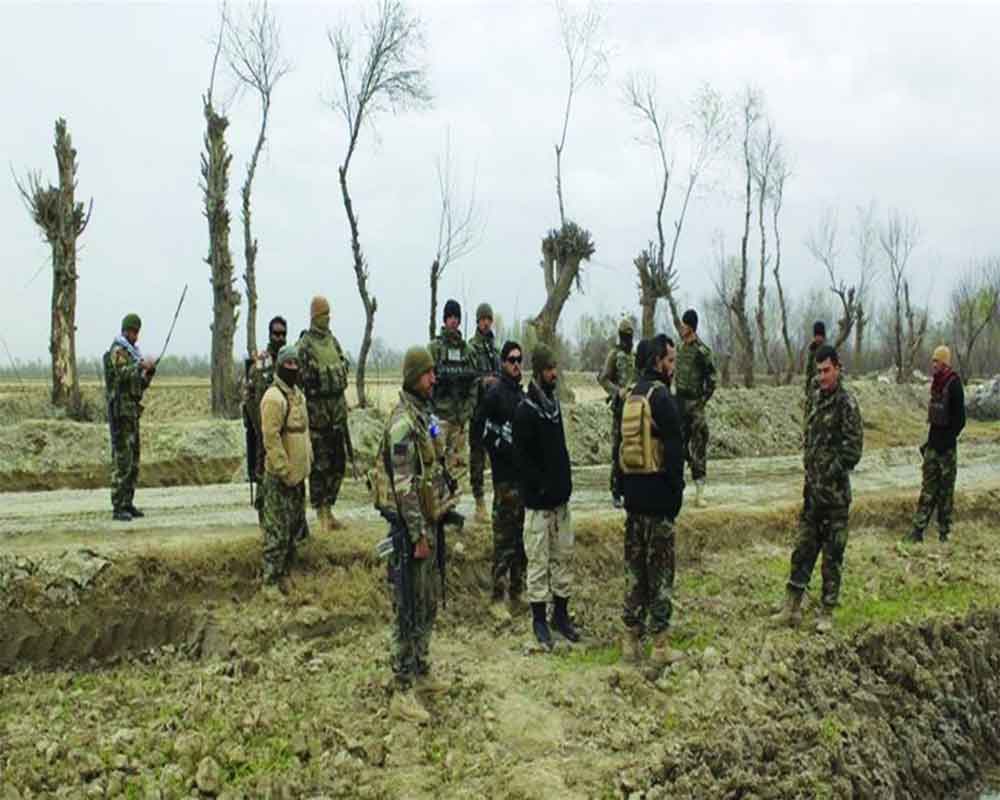 India would be in a difficult position when the Taliban come to power after the US forces leave Afghanistan. Hence, Delhi must work out a counter strategy to deal with a post-Ghani Afghanistan. It should chalk out a new plan to develop a working relationship with the Taliban leadership in order to prevent Pakistan’s proxies occupying the levers of power in Kabul

The US-Taliban peace deal hammered out in the last week of February in Doha had raised the hope of ending the internecine war in the war-torn Afghanistan. The Taliban leadership promised not to allow any Islamist terror organisations, particularly foreign terror groups such as the al-Qaeda and the ISIS, to operate from the country’s soil in return for the US forces withdrawal from the country.

However, considering the disagreement between the Taliban and the Afghanistan Government ever since the deal was inked, the historic peace agreement seems to be another false start for this war ravaged nation. What was witnessed in the beginning of the week is the swearing-in of two heads of States — Ashraf Ghani and his political rival Abdullah Abdullah in Kabul. Both of them have claimed themselves to be the rightful leader. Interestingly, Ghani’s oath-taking ceremony was attacked by rockets allegedly launched by the very ISIS. The turn of events have plunged the country into more confusion.

First, the two presidential inaugurations have left the commoners at their wits’ end.

Second, it has highlighted the fact that a bitter power struggle between the two Afghan leaders is coming up.

Third, the last week’s clashes between the US forces and the Taliban, accompanied by the ISIS attack on the condolence of a Hazara leader, portend that reclaiming peace in Afghanistan is not a cakewalk.

Around the same time, American special negotiator Zalmay Khalilzad has urged both sides to sit for talks at the earliest so as to iron out the differences and set the priorities for ensuring peace in Afghanistan.

The Taliban coming back to the mainstream is simply the reassertion of religious fundamentalism in Afghanistan. Let’s recollect what Taliban did during its tenure in office from 1996 to 2001 when it was toppled by the US-led war on terror following the 9/11. The Government of Mullah Omar was barely recognised by three nations i.e. Saudi Arabia, the United Arab Emirates and Islamist forces’ godfather Pakistan. Apart from banning women in public places, including the UN staffers, and demolishing the Bamiyan Buddha, the Taliban soon made Afghanistan a breeding ground of Islamic jehad. By providing safe haven for al-Qaeda chief Osama bin Laden, Afghanistan invited the ire of the US after 9/11.

Thus the global war on terror under the leadership of the US started right at the heart of Afghanistan, aiming to eliminate its roots and branches. This ultimately led to the fall of the Islamic regime of Omar. However, during its five-year term, the Taliban Government demonstrated ability in providing basic security within their reach and control, enforcement of religious law. Further, their Government achieved an effective opium poppy ban between 2000-2001. By virtue of its structure and functioning style, the mullahs did not operate any modern centralised structure of administration. Thus their communication with the general populace was too limited beyond a certain point. The Taliban being Islamic radicals had not accorded top priority to such modern architecture of governance at all. In fact, some key areas like foreign relations were never a concern for them as they were in favour of managing an exclusive zone far away from the international community.

After being in full control of Kabul, they executed former Afghanistan President Najibullah, who had been staying at a UN compound in Kabul for four and a half years. Hundreds were killed in the fighting of the last few days and they established a radical Islamic rule over the country.

It seemed they did not have a clear vision about governance and to sustain a radical rule when the entire world was averse to recognising them. What guided them was pure religious fervour and an immediate strength to impose their might over the hapless people over a sizeable territory of Afghanistan. But then, lack of a central authority, state organisations, a methodology for command and control mechanisms which can reflect some level of popular participation made it impossible for many Afghans to accept the Taliban (Rashid, A, 2001). The Taliban didn’t carry out even the minimum of developmental work because they believe that Islam will take care of everyone. So it was quite natural that the Taliban failed to reach out to the common Afghans.

Much beyond what had largely shaped the Taliban world view in those days was a conglomeration of limiting elements such as limited access to mechanisms of governance and conflict management, education, media, foreign relations and finally zero tolerance to different religious faiths. These finally circumscribed all efforts of the Omar regime to continue in power and survive a mighty American invasion in 2001.

Since its ouster from power, the Taliban leadership has learnt enough tactics to stay relevant. From being anti-modern in its initial days, the Taliban have started not only recognising the ubiquitous role of information & communication technology but are also using the IT tools to the best of their benefits.

Many analysts say if the Taliban insurgency has evolved into a force to be reckoned with, it has gathered much of its inspiration from the sharp rise of the al-Qaeda and probably the sudden growth of the ISIS in the ruins of Iraq. And all these factors have decisively translated these localised insurgents into an inseparable part of the so-called global jehad against the Western powers and their perceived enemies across the globe.

If at all a Taliban regime resurrects in Kabul, what could really unfold in Afghanistan? Those days of the misogynistic rule of the Taliban would never come up again for now. Certainly Pakistan will play a significant role in reshaping the future of Afghanistan. But orchestrating a forceful transition from Ghani Government to Taliban by the Pakistani deep State would irretrievably damage the image of Pakistan. For now, Pakistan and the rest of the international actors, including the US, need to facilitate an intra-Afghan talk as soon as possible.

Why can’t main stakeholders and the Afghan leadership articulate a clear plan for the next iteration of peace talks? Only such attempts will release new life into the peace process. More than resolving the current crisis, China, Iran and Russia would be happier to see America leaving Afghanistan. Mediators in the past frequently mythologise the participation of women and civil society organisations in peace deals as truly problematic.

Many of the experts even say that negotiations are a precarious process and they are conducted in private places. Also it has been said that additional actors will complicate the entire process of peace making. Such actors may destabilise the truce with the Taliban.

Another school of thought argues that women and civil society could be well engaged only after a negotiation with the Taliban is reached. It implies that now the time has just come to involve them as Afghanistan is heading for the implementation of the truce with the Taliban.

However, significant developments are likely. The Taliban will be on the rise as they have developed both military skills and diplomatic manoeuvrability to deal with friends and adversaries.

India would be in a difficult position when the Taliban come to power in Kabul and the US forces leave that country. Hence, Delhi must work out a counter strategy to deal with a post-Ghani Afghanistan. Since no Northern Alliance exists as of today for which India offered its support in the past, now it should chalk out a new plan to develop a working relationship with the Taliban leadership. Else, its long-term plan for development assistance and continuous support towards the democratically elected regimes would all be lost once Pakistan’s proxies occupy the levers of power in Kabul.

Undoubtedly, Pakistan’s treating of Afghanistan as a buffer state and exploiting the jehadi elements for its own advantage would only accentuate acrimony and antagonism against it in the days to come. Thus Islamabad must reappraise its policies towards Afghanistan. It should invest more on the Afghan people than on selective groups, leaders and more particularly on the radical elements. Instead of making Afghanistan an alienated frontier and making more faultlines ready for the jehadis, its neighbours and other international actors should push for permanent peace, involving all ethnic constituencies, tribal leaders and most importantly, the popularly elected regime in Kabul.

Otherwise, without an iota of doubt, Afghanistan would be turn into a perfect storm of renewed insurgency. The Taliban are not simply to be viewed as a radical Islamist movement; it has been able to build around a charismatic mullah phenomenon for marshalling support from tribal kinship and rural masses. And for years, this extraordinary support, buttressed by Talib reinforcements from the border areas of Pakistan was more than enough to pound and counter the US-led coalition across Afghanistan.

Keeping all these critical elements in mind, Ghani and Abdullah should come together first and work out a quick rapprochement so as to thwart a resurgent Taliban and to facilitate a new road to peace. Else Afghanistan will permanently remain as a labyrinth of violence.