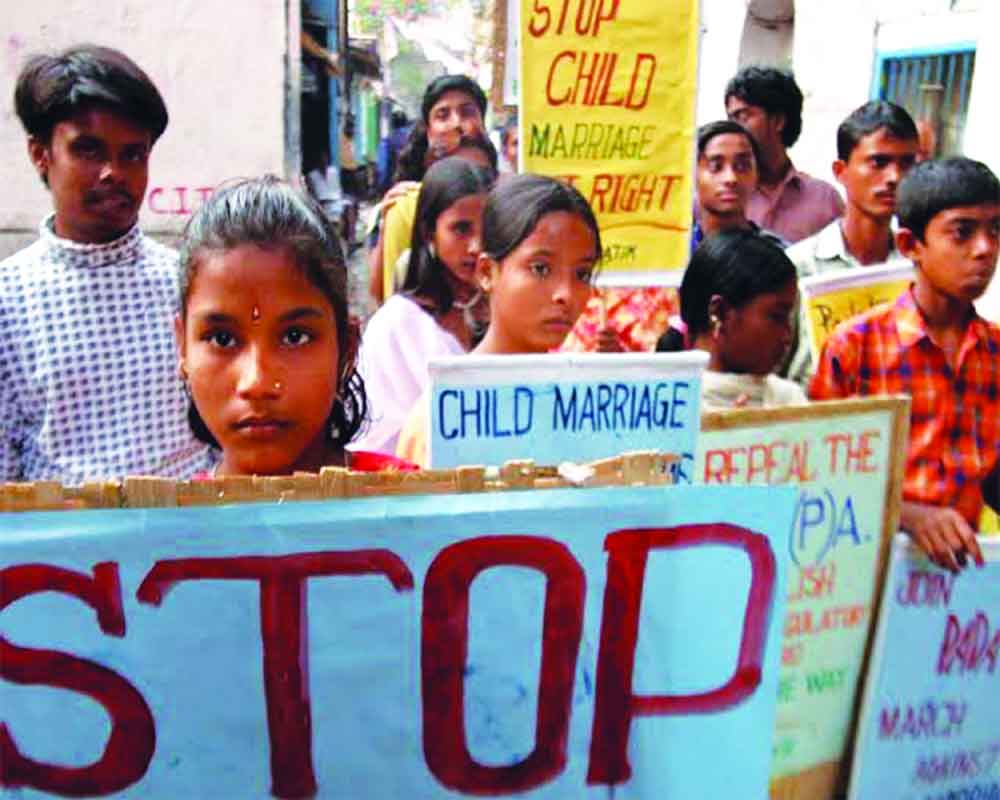 A Government proposal to amend the Prohibition of Child Marriage Act, 2006, to render all underage marriages void, is being opposed by child rights activists

A proposal by the Ministry of Women and Child Development to amend the Prohibition of Child Marriage Act (PCMA), 2006, to render all underage marriages void, has raised the hackles of women’s groups, child rights activists, community-based organisations and legal and development researchers. They contend that this move would not benefit underage girls and do more harm than good.

At present, under the PCMA, though all underage marriages are voidable, they are treated as valid. This means that while such marriages can be prevented with the help of this Act, they are considered valid once they take place. It (the marriage) can, however, be nullified by the underage girl. On the other hand, if amended, the PCMA will no longer recognise the marital status of underage girls or their matrimonial rights as it does now. It will also take away their right to decide whether or not they want to continue with the marriage or nullify it.

Then, how will this amendment empower girls? Why is the Government pushing for it when Karnataka has already tried this and not succeeded in deterring the incidence of underage marriages? In 2016, the Karnataka Government declared all underage marriages as legally void (as compared to such marriages being voidable if the underage girl so wants under the Central legislation). In such legally void underage marriages, while the girl continues to stay at her matrimonial home despite no legal recognition of her marriage, she has no access to inheritance and marital rights.

Experts say that making the marriage void impacts the girl negatively as she will continue to be vulnerable until such time the couple marries again on reaching adulthood. Only then will their alliance be considered legally valid and the girl become eligible to avail social welfare benefits. Consultations on whether or not this amendment was needed were held recently by the Partners in Law in Development (PLD), a legal resource group. Over 25 NGOs working on the issue shared experiences of the circumstances in which girls were forced into underage marriages and how the law worked on the ground when they sought help either to prevent or nullify them from duty-bearers or community workers.

The inability of the law to protect the community or NGO workers when they intervened to help these girls was also discussed, just as it failed to help Bhanwari Devi, a Government worker employed to stop child marriages in Rajasthan. She was sexually assaulted to punish her for intervening in the marriage of an infant girl from a dominant caste.  It has been over 25 years but her case is yet to come to any conclusion and the perpetrators are yet to be punished. Therefore, in such a scenario, greater focus on eliminating root causes of such marriages, addressing existing patriarchal attitudes and investing on empowering girls and their families could be a better way to end child marriage. As early marriage is often not a choice, there was an urgent need to tackle poor education, taboos around adolescent sexuality and the lack of employment opportunities, all of which combine to make marriage compulsory for girls according to Madhu Mehra of PLD.

A study by PLD on how PCMA has been used over nine years shows that the law had been largely used with criminal laws by parents of girls to target marriages without their consent. It found that PCMA cases filed by the parents of the girl, essentially to counter elopements were far greater that those by Child Marriage Prohibition Officers (CMPO) against forced marriages.

In such cases, parents used the Protection of Children from Sexual Offences Act, 2012 (POCSO) in conjunction with PCMA to prosecute boys in consensual relations and runaway marriages. Under POCSO, the age of sexual consent is 18, the same as the minimum age of marriage. This makes POCSO a powerful legal tool to punish the boys in a sexual relationship with the adolescent girls even if it is consensual.

In fact, romantic cases in which the girl admitted to a consensual relationship with the accused boy constituted a high percentage of cases under POCSO. A study by the Centre for Child and the Law in Bengaluru’s National Law University of India found that of the 2,788 POCSO cases in the five States studied, Delhi topped the list with 23 per cent of them being romantic cases followed by Karnataka (21.8 per cent in just three districts), Andhra Pradesh (21.2 per cent), Maharashtra (20.5 per cent) and Assam (15.6 per cent).

In Mumbai too, it was no different. Aarambh India, a portal dedicated to protection of children from sexual offences, worked on 260 cases jointly with  Prerana, a not-for-profit working on child protection and the international ‘Break the Silence’ campaign of the Hong Kong-based ADM Capital Foundation. They found that about 25 per cent were involved in consensual sexual relationships, of which a large number were between the age group of 16-18 years.

A study of 731 police cases in 2017 in tribal areas of Gujarat’s Dahod, Panchmahal and Morbi districts revealed that reports of missing girls aged between 14-18 years were registered as abduction cases. Conducted by Area Networking and Development Initiatives, (ANANDI), a non-profit working in the State, the research found that 46 per cent of these abduction cases filed were related to marriage (against wishes of parents) and all the complainants were parents of the girl.

Adolescent girls who elope often do so from desperation. In their recent report on Why Girls Run Away to Marry, the PLD points out that girls take this step when they realise discovery of their romantic relationship will cause trouble, or when forced marriage is imminent. The study states that elopement is also a way for the girls to escape isolation or abuse in natal homes while bearing the drudgery of housework. In such cases, the report states that punitive laws cannot be a solution to tackling either elopements or marriages forced by conditions of economic deprivation.

Since a high percentage of these cases are of consenting relations between adolescents, there needs to be a recognition and acceptance of their sexuality instead of criminalising them. Since health service providers are mandated to report cases of sexual activity and pregnancy among adolescents that come to them, it automatically pushes their case into the criminal justice system without the consent of the girls.

Ongoing interventions and research between the Mumbai-based Centre for Enquiry Into Health and Allied Theme (CEHAT), with Mumbai Municipal Hospitals showed that of the girls brought in during the period 2008-2016 by the police for rape examination, 41 per cent were under 18 years.

Although these girls clearly stated that they were in consenting relationships and did not want to record a complaint, their parents insisted on filing First Information Reports (FIRs). Further, CEHAT also found that when girls visited public hospitals seeking a medical termination of an unwanted pregnancy, the hospitals violated their right to choice by making abortion conditional i.e. it would be allowed only if the girl reported her case with the police and registered a FIR.

Past cases have shown that delays following such reporting sometimes exceed  20 weeks within which a termination of pregnancy is allowed by law. This forces the girl to either approach the courts or carry the pregnancy to full term, both of which can be traumatic.

India is among 196 countries which are signatories to the Convention of the Rights of Child (CRC). This calls for recognising adolescent sexuality as well as underage marriages of older adolescents to be treated as valid if the indirect harm outweighs its benefits.

Studies by the organisations opposing the proposed PCMA amendment have provided evidence of the harm caused by the law. Criminalising consenting adolescents is a violation of their rights and addressing the root cause of such marriages/elopements by building capacities and sexual and reproductive health knowledge of adolescents must be the only options.