Move the needle on cooling

Move the needle on cooling 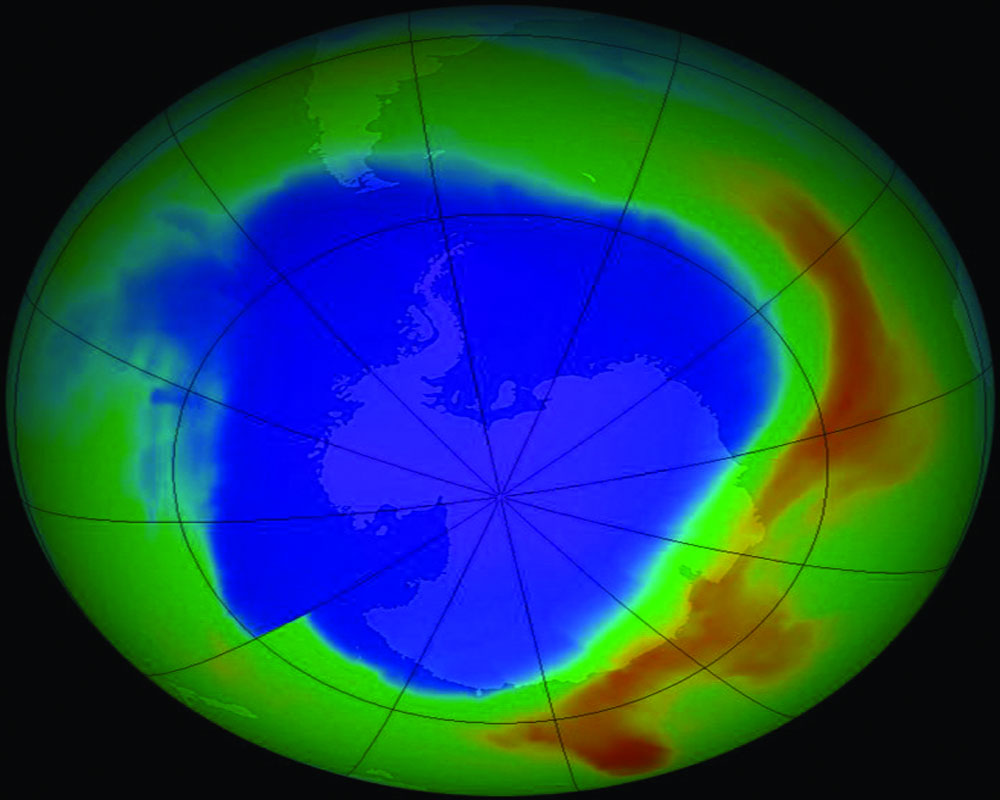 After experiencing the catastrophic effects of climate change, it’s high time for all nations to join hands in adopting low carbon pathways to restore the ozone layer

The ozone layer, the Achilles’ Heel of our Earth’s atmosphere, is responsible for protecting our terrestrial and marine life. The layer, which is a highly reactive and made of trace gas, constitutes about three molecules for every 10 million molecules of air and absorbs bits of the sun’s ultraviolet (UV) radiation that hits the Earth. However, decisive research in the early 1970s underlined signs of trouble in this vital blanket. In 1974, late Professor Sherwood Rowland and Professor Mario Molina at the University of California, Irvine, published an article in Nature elucidating the detrimental threats to the ozone layer from chlorofluorocarbon (CFC) gases.

It was found that CFC, which is commonly used in refrigerants for cooling applications and aerosols,was eating away at the ozone layer once it was released into the Earth’s atmosphere. The situation got worse as the consumption of CFC exponentially increased in various business and industries due to its low cost and properties, namely non-inflammability and non-toxicity.

Beginning of the world’s most successful environmental agreement: Eleven years after the findings of Professor Rowland and Professor Molina, a team of English scientists, too, learnt about the thinning of the ozone layer, which is popularly known as the “Ozone Hole.” They realised that the CFCs had started to break down the ozone, leading to the entry of harmful UV rays into the Earth’s surface. This had led to an increase in skin cancer cases among humans and was harming terrestrial and marine ecosystems, too. With the objective to preserve human health and protect the environment from the harmful effects of the depleted ozone layer, the Vienna Convention for the Protection of the Ozone Layer came into existence on March 22, 1985.

The convention provided the framework for the Montreal Protocol (MP), the most successful environmental agreement till date to achieve universal ratification. On September 16, 1987, the United Nations (UN) and 45 other countries signed the Montreal Protocol on Substances that Deplete the Ozone Layer. It aimed to preserve the protective shield through worldwide control, reduction and phasing out of production and consumption of ozone-depleting substances (ODS). Three decades ago, the speech of a 12-year-old girl, Severn Cullis-Suzuki from Vancouver, Canada at the 1992 Earth Summit caught the attention of leaders of parties and the UN in strategising expeditious measures for phasedown of ODS. “I am afraid to go out in the sun now because of the hole in our ozone. I am afraid to breathe the air because I don’t know what chemicals are in it. If you don’t know how to fix it, please stop breaking it,” said Cullis-Suzuki in her landmark speech.

In 1994, the UN General Assembly proclaimed  September 16 as the International Day for the Preservation of the Ozone Layer, commemorating the date of the signing, in 1987, of the Montreal Protocol. Today, the Parties to the Montreal Protocol have phased out 98 per cent of their ODS, which saved an estimated two million people from skin cancer annually.

Refrigerants, the key determinants: The establishment of a regime for refrigerants started taking shape during the 18th century when the world embraced the technological advancement known as the vapour compression refrigerating system which later became the most successful commercial technology.

The unprecedented need for cooling resulted in the application of early adopted natural refrigerants (carbon dioxide, ammonia, sulphur dioxide, water and air). The first generation of refrigerants was gradually succeeded by the fluorochemicals, commonly known as Chlorofluorocarbons (CFC) and Hydrochlorofluorocarbons (HCFC) like R13, R123, R22 due to their varied properties like stability, non-flammability and so on. Initially, this regime of refrigerants was hardly looked at by researchers from the environmental perspective.

Later, their detrimental impacts on the ozone layer led to usage of Hydrofluorocarbon (HFC) and Perfluorocarbons (PFC), which are not ozone depleting, but had global warming potential that can be thousands of times more potent than carbon dioxide in contributing to climate change. During the early 2000s, the unprecedented adoption of HFC refrigerants in majority of applications led to the rise of greenhouse gas (GHG) emissions and the associated global warming effects.

Continuing the momentum: Realising the colossal impact of the carbon footprints caused by HFC refrigerants, world leaders and the UN had convened at the capital of Rwanda for the 28th meeting of the Parties to the Montreal Protocol in October, 2016. The convention led to the formation of the Kigali Amendment, intending to reduce the emissions of GHGs in a move that could prevent up to 0.5° Celsius of global warming by the end of this century, while continuing to protect the ozone layer. Aiming at a sustainable climate, as a course of action under the Kigali Amendment, the world economies are now making efforts in a phased manner to scale down the currently-used HCFC and the high global warming potential (GWP) HFC by the late 2040s to countermeasure global warming.

Thus, swift adoption of low-GWP refrigerants can be well addressed by exploring environmental benefits as well as market readiness. However, while pushing the envelope, it is important to see the refrigerant transition from the perspective of market adaptability, maintaining the business-as-usual scenario. The overall environmental impact of the refrigerant can only be reduced by integrating refrigerants with low upfront costs, energy efficiency of overall refrigeration systems and safety aspects.

For instance, merely changing a refrigerant in an existing refrigeration system without modifying it may reverse the desired economic and environmental benefits.To avoid such scenarios, the cooling industry has been putting its efforts into designing systems to ensure commercial viability of next-generation low-GWP refrigerants. However, the use of such new systems is very limited and primarily depends on end users who are inclined to the existing systems with commonly-used refrigerants due to their low costs and already proven results.

This year, the theme of the Ozone Day is “Ozone for life: 35 years of ozone layer protection”, commemorating the success of the 1985 Vienna Convention for the Protection of the Ozone Layer. At the same time, the continuous release of GHG emissions into the atmosphere has resulted in the decade of 2010-2019 being the hottest-ever. After experiencing the catastrophic effects of climate change, it’s high time for all nations to join hands in adopting low carbon pathways for our future generations. The deployment of sustainable energy options and the adoption of environment-friendly refrigerants in the cooling sector are expected to avoid upto 0.5° Celsius of global warming by 2100.

Cooling: India harbours16 per cent of the world’s population but currently only around seven to nine per cent of its people have access to air-conditioners. Cooling is cross-sectoral, spanning wide thematic areas like space cooling, industry, transport, food security and so on. According to the 2018 International Energy Agency (IEA) report, India’s cooling industry is expected to grow exponentially by 2050. Recognising the accelerated growth of cooling needs in the future, India proactively introduced its strategic document, India Cooling Action Plan (ICAP) in March, 2019 to show its commitment to explore and adopt cutting-edge solutions for more sustainable cooling with less environmental impacts.

To tackle this unprecedented growth, it is imperative for the Indian cooling industry to strategise accelerated methodologies by promoting indigenous research and development activities to practise the best energy-efficient technology options and adopt the next generation environmentally-friendly refrigerants in a business-as-usual scenario.

This can be well-supported by actions like ensuring the synergies among inter-ministerial actions, creation of a strong institutional framework to identify,  certifying and financing innovative cooling technologies, fast-tracking the patenting procedures for new cooling technologies and effective implementation of existing cooling policies.

In the long-term on the demand side, the emphasis should be placed on factors like creating a user demand pool in favour of cooling aided by public-private-partnership and facilitating credit-linked incentives to the manufacturers and users adopting newly-developed cooling technologies and so on.