Not fighting a losing battle

Not fighting a losing battle 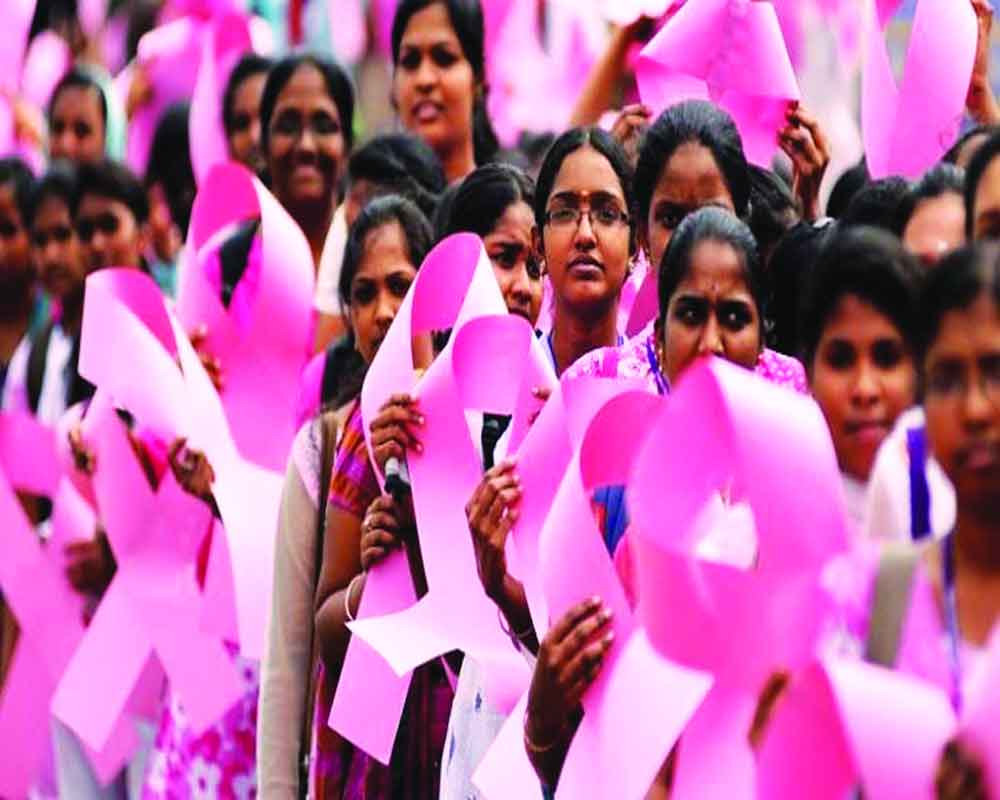 There’s hope for people with advanced stage cancer due to new diagnosis, monitoring and personalised treatment methods available today and the new ones being developed

Communicable ailments are on the decline in India but non-communicable maladies like cancer and cardiovascular diseases are on the rise. Cancer has emerged as one of the most important causes of morbidity and mortality in the country. As per the latest GLOBOCAN data, compiled and disseminated by the International Agency for Research on Cancer (IARC) ahead of World Cancer Day today, there are 11.5 lakh new cases and 7.8 lakh cancer-related deaths every year in India. Mortality in low-income and middle-income countries, including India, is on the high side compared to high income counterparts. This is attributable to relatively low awareness, late diagnosis and the lack of or inequitable access to equivalent care compared with patients in high-income countries.

In India, the problem is compounded by the low availability of dedicated specialists. The country has just 2,000 oncologists to treat 11.5 lakh new cases annually. Very few institutes reportedly offer Medical Council of India (MCI)-approved specialty courses in oncology, leading to a very limited increase in the current workforce every year. Many oncologists take up more than 1,000 new patients per year and their workload is among the highest globally. In developed countries the oncologist to cancer ratio tends to be a much healthier 1:100.

Concentration of specialty oncology centres in the metros and big cities is another problem as patients in smaller towns and rural areas are still largely deprived. Every year, tens of thousands of cancer patients flock from all over the country to a handful of hospitals like the Tata Memorial Hospital in Mumbai and the All India Institute of Medical Sciences in Delhi due to the absence of treatment facilities closer to where they live and the unaffordable cost of treatment at private hospitals. There is an urgent need for policymakers to consider measures that will improve the doctor-to-patient ratio and also build health infrastructure in smaller towns to address the growing epidemiological and financial burden of the disease.

The country’s cancer incidence is expected to almost double as a result of demographic changes alone by 2040. In terms of reducing mortality due to the disease in India, early detection is one approach that could give people a much better chance of fighting it successfully. India does not have a national breast cancer screening programme but various Government and private hospitals have been offering screening services for men and women.  This has slowly increased the proportion of cases being diagnosed but more needs to be done.

People often ignore symptoms either due to lack of awareness or due to fear, anxiety and social stigma related to diagnosis. Increased awareness of breast cancer and penetration of opportunistic screening can lead to more cases being detected in the early stages. This will not only drastically improve the odds of successful treatment but also reduce the cost and aggressiveness of treatment. For example, there are many advantages of being detected in the early stages of breast cancer. Patients who are diagnosed with Stage I or II breast cancer are candidates for breast conserving surgery (BCS) versus full breast removal in mastectomy.  Because a woman gets to keep her breast and has a better cosmetic outcome, the psychological effects associated with permanent removal can be avoided.  In the West, breast conservation rates exceed 70 per cent for early breast cancer. In contrast, rates of BCS have traditionally been very low in Asian settings.

In India, BCS rates vary from 10 per cent in smaller cities to about 40 per cent in the metros. There are many reasons for this disparity. One of the important reasons for the disparity is the requirement for highly-specialised oncosurgeons and radiation after BCS.  Radiation therapy is not easily available in smaller towns and considering BCS leads to better body image and psychosocial outcomes compared to mastectomy, having better radiation facilities across  the country is certainly something that we need to resolve.

Another advantage of early detection  is the availability of a new category of tests called prognostic tests. Mounting evidence that all early-stage breast cancer patients don’t benefit from chemotherapy led to the development of prognostic tests. These tests profile the tumour biology of patients to determine breast cancer relapse or recurrence risk. Test results can be used to put patients into different risk categories which help to personalise their treatment depending on their specific risk of recurrence.

Increasingly, we are seeing a more personalised approach to cancer treatment, rather than a one-size-fits-all approach. Personalised medicine works by means of analysing patient-specific information and prescribing them therapies best suited to treat them and prevent cancer from returning. This can be game-changing in many ways as it can lead to improved outcomes for patients by ensuring they get the right treatment. It can improve the quality of life by helping patients avoid overtreatment. It can lead to huge cost savings for the patient in a country like India where most healthcare expenditure is out of pocket and it can result in more optimised use of healthcare resources.

Targetted cancer therapies or drugs block its growth and spread by attacking specific biomolecules that are involved in cancer signalling pathways, versus most standard chemotherapies which act on all rapidly-dividing cells whether cancerous or not. Many targetted drugs have been approved by the FDA to treat specific types of cancer. For example, patients with HER2-positive breast cancer receive the anti-HER2 drug trastuzumab, pertuzumab, TDM-1 to control growth and spread of the tumour. Use of these targetted therapies has proven to decrease the risk of breast cancer recurrence by 50 per cent.  For advanced small cell lung cancer, the FDA recently approved atezolizumab as the second immunotherapy drug for, and the first for use as part of first-line treatment. They also approved targetted drugs for bladder cancer, head and neck cancer, lymphoma and other cancer types in the last year.

Another promising area of targetted cancer treatment is immunotherapy, which taps into the ability of using a person’s own immune system to fight cancer.  Many immunotherapy treatments are much more tolerable than chemotherapy or radiation. The goal is that they will reduce or even replace the use of more toxic therapies. Various immunotherapies have been approved by the FDA and have been used to treat patients with advanced or metastatic disease.

Recently, the FDA approved Chimeric Antigen Receptor (CAR) T-cell therapy for certain cancers. This therapy involves genetic modification of the patient’s autologous T-cells to express a receptor specific for a tumour antigen. This helps the patient’s cells to find and attack cancer cells. Remarkable results have been seen in previously untreatable cancers because of this.

Cancer vaccines are another topic of great interest. For cancers caused by viruses such as Hepatitis B, that can cause liver cancer, and the human papillomavirus that can cause cervical cancer, vaccines already exist which prevent infection with these cancer-causing agents. By blocking the viruses from infecting body cells, these vaccines prevent the development of subsequent virus-associated disease.  For cancers not caused by virus, researchers are working to develop vaccines that they hope will activate the immune system to attack cancer cells reliably and effectively. They are also exploring other ways to boost the immune system’s response to malignant cells. If successful, these cancer vaccines can be a big game-changer in the future.

Not only treatment but even the screening of cancer is evolving in very exciting ways. The advantages of Artificial Intelligence (AI) and Machine Learning (ML) are visible in many industries and healthcare is no exception.  A recently-published study by MIT’s Computer Science and AI Lab on a new deep learning-based prediction model that can forecast the development of breast cancer up to five years in advance is one such example.

AI and ML can increase access to treatment in developing countries which don’t have enough cancer specialists. It can improve the sensitivity of detection, add more value in treatment decisions and  help personalise treatment. There’s increased hope for people with advanced stage cancer due to all the new diagnosis, treatment and monitoring methods not only available today but also in development.

(The writer is a PhD in cell biology from IIS and has done pathbreaking research in the field of cancer and stem cells. She is  founder and CEO of a cancer diagnostics firm in Bengaluru)