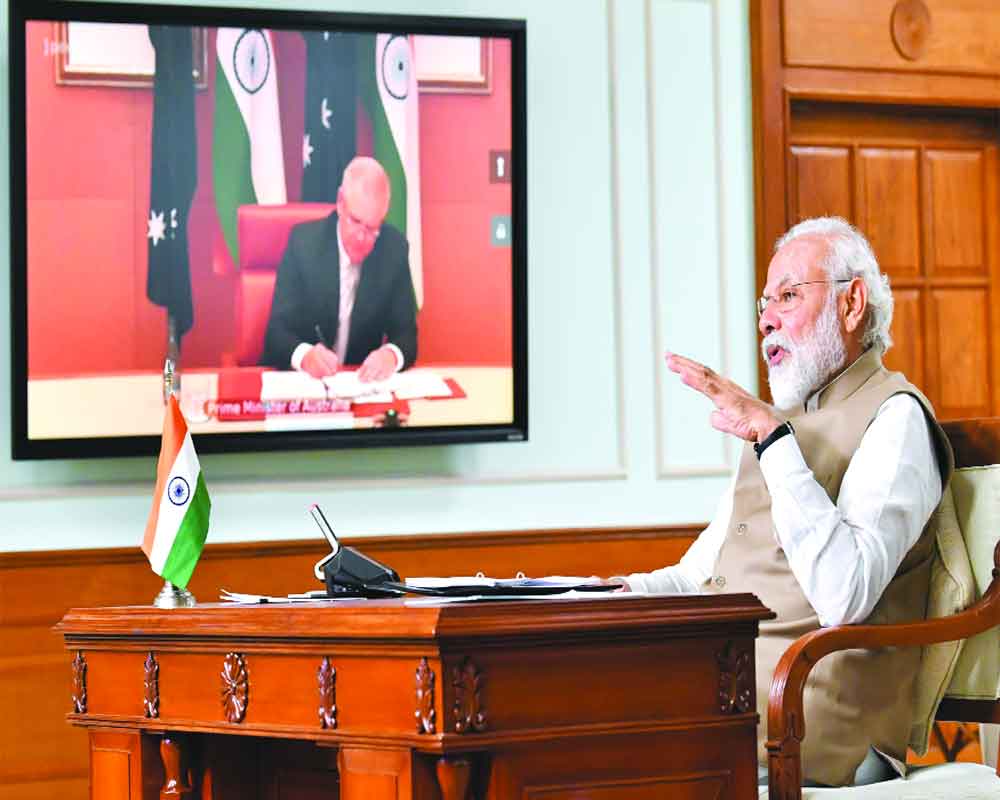 The virtual bilateral summit between PMs Modi and Morrison has come at an opportune time when both nations face threats from China. This may herald a new strategic partnership

Aussie Prime Minster Scott Morrison’s tweet about sharing a “samosa platter” with Indian Prime Minister Narendra Modi and the latter’s response saying, “Connected by the ocean, united by the samosa” made for a good banter before the inaugural of the first-ever virtual summit between them. ScoMo with the “samosa fame” and NaMo with the “chai fame” make for an unbeatable combo to welcome winters in Down Under and plug a gap in diplomatic ties. Coming in the backdrop of both India and Australia facing tense relations with China, the summit was hugely significant. As for the former, it faces tensions along the Line of Actual Control (LAC). The latter has been economically hit for asking for an independent inquiry into the origins of the novel Coronavirus.

More than anything else, the virtual summit gave a fresh momentum to the bilateral agenda with both nations inking several pacts. While the focus of the media has more or less remained on similar issues — ranging from Quad/Quad-plus talks, RCEP, Indo-Pacific strategic cooperation, Malabar/AUSINDEX Naval exercises, Indian students in Australia to cyber security and mutual logistics support agreement among others — what had escaped their attention was their bilateral journey. This was highlighted by Australian High Commissioner Barry O’ Farrell in a compelling speech in New Delhi recently. He said, “Over the last few months and years, India and Australia have grown closer together. They are at a historical high.” This journey extraordinaire beholds a dozen of key determinants and political pathbreakers that deserve a roll call here.

In the early 2000s, the then Prime Minister John Howard’s role in placing bilateral business and trade ties on the high road is incontrovertible. But the setback came with former Prime Minister Kevin Rudd’s refusal to supply uranium, the “monkey-gate” cricket controversy, Muhammad Haneef case and Indian students’ safety concerns. If Prime Minister Julia Gillard acted timely and decisively to reverse this decision to resurrect plummeting ties, her successor, Tony Abbott addressed the students’ issue effectively by cracking down on dubious education providers, tightening visa rules and stamping out corruption in the industry. To some extent, both leaders also dispelled New Delhi’s perception of Australia’s pro-China tilt under the Mandarin-speaking Rudd.

New Delhi has remained grateful for Canberra’s stellar support to India’s entry into the Nuclear Suppliers Group (NSG) and securing a waiver from the group to enable uranium export and get rid of the nuclear outsider tag. Over time, both have mastered the art of employing the allure of culture to galvanise relations. If a garlanded Malcolm Turnbull sat on the footsteps of the Akshardham temple in New Delhi alongside Modi, Morrison, taking a cue from former US President Barack Obama, who once cited a famous Hindi dialogue from a Shahrukh Khan blockbuster to charm the Indian audience, tweeted a selfie with Modi in Hindi saying, Kitna achcha he Modi (How good is Modi). And Modi returned the courtesy the Australian way by tweeting, “Mate, I’m stoked about our energy in bilateral relations.”

During his visit to Australia in 2014, Modi had acknowledged Canberra’s leadership in sports. While Australian cricketers enjoy star attraction in the Indian Premier League (IPL), legends like Matthew Hayden, Brett Lee and others grace the commentary box. Now, the Australian Olympic swimming gold medallist Stephanie Rice also commentates in the Indian kabaddi league (a local sport). Other professionals, too, have been encouraging marginalised children and youth to take up sports in a bid to improve livelihoods.

Both nations possess a more nuanced mutual understanding of opportunities and challenges. That is thanks to Peter Varghese’s report, ‘An India Economy Strategy to 2035: From Potential to Delivery,’ and the complementary Australia Economic Strategy (AES) report by Ambassador Anil Wadhwa that provide a blueprint for business and trade engagements.

Besides, Australia is addressing its Asian literacy deficiency, too. The New Colombo Plan supports over 10,000 research fellowships in 40 Asian countries, including India, and produces around 900 Australian undergraduates undertaking research, study and internships in India. But Australia must reinvent the old 3Cs (Curry, Cricket and Commonwealth) by nurturing a new paradigm: Constituencies of Country Champions. It must invest in people and institutions with language, cultural and area expertise.

Following the Valentine’s day terrorist attack that killed 41 Indian security personnel in Pulwama, Jammu & Kashmir, the bipartisan Australian support from Morrison, Foreign Minister Marise Payne and Penny Wong, leader of the Opposition in the Senate, castigating Pakistan for its role in nurturing cross-border terrorism, was warmly noted and acknowledged by the Modi Government.

Stunned by the 2019 federal elections debacle, the Palaszczuk Government’s swift approval to the Adani Mining operation that remained enmeshed in unending litigations and factional political bickering in Queensland for over eight years, infused fresh life in bilateral ties. In hindsight, the decision could not have been better timed from the business and trade perspective.

In the fight against COVID-19, an Australian NGO, Doctors for You, has provided upgraded medical equipment and set up 20 isolation and treatment beds in Patna, Bihar. Prime Minister Morrison has also been in admiration of Prime Minister Modi’s SAARC COVID-19 regional initiative and had urged him to initiate the G-20 COVID-19 summit, which materialised in March. Now secretary-level meets with Quad-plus counterparts, including Australia, India, Japan and the US, on a weekly basis is gathering coordinated response. In Australia, Indian students are also playing an outstanding role in providing care to the aged, distributing food and helping emergency services.

Both sides also seem to have overcome their mutual inhibitions over the China factor. India’s military standoff in Doklam and now in Ladakh and Australia’s discomfort over cybersecurity concerns, Beijing’s alleged interference and influence in internal affairs, in politics and academic institutions, Hong Kong protests and human rights abuses against Uyghurs Muslims have brought the two partners closer strategically.

The pandemic has also created a global synergy among liberal democracies for a more transparent, accountable and rule-based order. Australia’s demand for an international inquiry into the origins of the Coronavirus found favour in New Delhi. This, along with the backing of 137 countries,  for a review of the origins of the virus under the aegis of the World Health Organisation (WHO) has put more pressure on it.

Lastly, Australian Senator  Simon Birmingham, who led a trade delegation to New Delhi in February, had said, “Australia must look into alternative markets in the European Union and India.” His call must have been heard loud and clear by New Delhi. As Australian barley farmers look to divert exports to India, Australian businesses are turning to India for answers. Undoubtedly, the bilateral journey of the two vibrant democracies has braved extraordinary and testing times which must be remembered as the two leaders herald a new dawn in strategic partnership.

(The writer is CEO, Institute for Australia India Engagement, Brisbane)