Delhi ready to tackle situation if number goes up: Kejriwal

Delhi ready to tackle situation if number goes up: Kejriwal 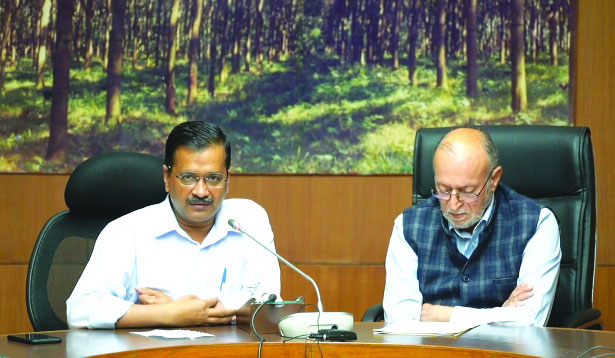 He said the Delhi Government is now feeding nearly 20,000 people daily, from Saturday we will be feeding 4 lakh.

He said, “Till Thursday, there were only 36 COVID-19 cases in Delhi. Today, three more cases have been confirmed which has totaled the cases to 39. Out of these 29 cases had a travel history and 10 are via local transmission.”

Kejriwal said the team of doctors has submitted a detailed SOP on the issue and the Government is fully prepared to deal with up to 100 patients per day and are preparing for 1,000 positive cases daily in future.

Kejriwal said, “The situation is under control right now, since there is a maximum increase of 3-4 cases per day, and there were also days when no new cases were registered.”

“If we get 100 new cases every day, the current healthcare system that we have is enough to treat the surge. For that, a detailed plan has been created to see how many isolation beds, ventilators, ICU beds, testing mechanisms and strength, ambulances, medical staff such as doctors and nurses, under each head of 100, 500, and 1000 new cases every day. They have also mapped a mechanism on which private hospitals to include in case of the surge, where the ambulances, ventilators and other resources will come from, etc.

“We will start implementing all these plans of action once the cases rise from 100 per day. We have a detailed plan of treating up to 1,000 new cases per day. But, I hope that we never reach this stage and I hope and pray that the rise in 4-5 new cases will also decrease in the future,” said Kejriwal.

For the poorest sections of society, the Delhi Government is providing free ration to the people. Those who do not have ration cards, are being fed meals by the Delhi Government in 224 night shelters. “We were feeding nearly 20,000 people per day through these night shelters until now, but we also observed that the number of people was rising. I noticed some videos on the social media of people who could not get meals,” said the CM.

Urging Bihar and Uttar Pradesh migrants not to leave the Capital, Kejriwal said his Government will ensure timely supply of food to daily wagers and homeless.

“Those who do not have ration cards, are being fed meals by the Delhi Government in 224 night shelters. “I noticed some videos on the social media of people who could not get meals,” he said.

“To provide lunch and dinner facilities at 325 Government schools across Delhi. Every school shall be able to feed around 500 beneficiaries each day and each night. The Government has also increased the supply of meals in the existing night shelters from today.

“I have also instructed the MLAs to ensure that no one in their constituency suffers from hunger. They should collaborate with the society and provide food to all,” he said.

Kejrwial said, “Many social and religious organisations have come forward to help, including ISKCON, Radha Soami, gurudwara organisations, and many other organisations are helping the Government and also providing food in their personal capacity. My thanks to all of them on behalf of the people.”

Requesting people to maintain social distance, Kejriwal said the lockdown will bear no results if people do not indulge in social distancing. “I have seen media stories on our night shelters and how beneficiaries are made to maintain a considerable distance from each other,” he added.

The Delhi Government has started transferring pension amount of Rs 5,000 to eight lakh pensioners including senior citizens, widow and disabled in first phase.

“Today, we have transferred Rs 5,000 in the account of pensioners, rest five thousand will be transferred in first week of April in second phase,” Kejriwal said.