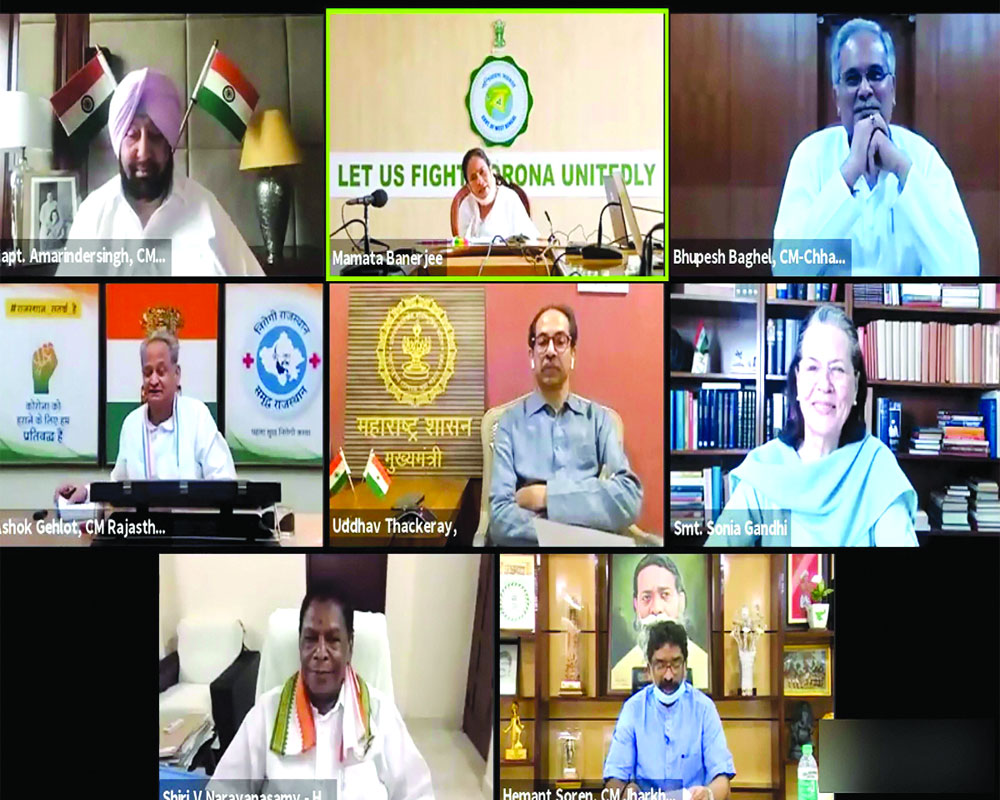 The Centre may be all set to go ahead with its NEET and JEE early next month, but the chorus to oppose the tests amid the pandemic is getting shriller by the day. On Wednesday, Congress chief Sonia Gandhi and Chief Ministers of seven States, including West Bengal and Maharashtra, resolved to approach the Supreme Court and the Rashtrapati Bhawan for postponing the tests.

In the nearly two-hour long meeting, all the seven Chief Ministers agreed that conducting exams amid the pandemic could have grave implications and decided that they should unitedly approach the Supreme Court for a review petition on its earlier order.

In the meeting, Sonia contended that students’ problems were being dealt “uncaringly” by the Centre, while Mamata asked all Opposition Chief Ministers to jointly approach the Supreme Court for postponement of JEE and NEET exams in view of Covid-19 pandemics.

Education Minister Ramesh Pokhriyal has said both the exams would be held next month as per schedule and the National Testing Agency is all set to conduct.

Hitting out the Modi Government over “attacks on the federal structure”, Mamata said States were being bulldozed by the BJP-led Central Government.

“The situation today…We cannot speak out, we cannot speak freely…from Facebook to everywhere…there is fake news, distorted news to destroy those in the oppositon,” Mamata said.

“This will be my request to all State Govts, let us do it together, let us go to Supreme Court & postpone the exam for the time being until and unless the situation allows students to sit for exam (JEE/NEET),” Mamata said.

She also reminded that she has written to Modi several times to intervene in the matter and urge the SC to review its decision in the interest of the student community.

Mamata said Bengal is facing large numbers of patients of Covid every day and the students will have to travel to various destinations to appear for the exams.

Thackeray also said his Government was never against conducting exams but when the exams could not be conducted in June how can they be expected to be held in August and September when the state of Maharashtra is dealing with the everyday increase in the number of Covid patients.

He also pointed out how Aditya Thackeray had written to the Prime Minister regarding postponement of exams and the academic session to be shifted to January 2020.

Punjab CM Amarinder Singh said, “There was no time to seek time from the Prime Minister to discuss the issue. Let us all get together to move the Supreme Court for postponement of the exams, which are threatening the lives of lakhs of students.”

He said all the Opposition-ruled States must start working together and fight for their rights. On the occasion he assured that his Government will be setting up a committee soon to assess the impact of the new education policy on the State’s education system and finances.

Jharkhand CM Hemant Soren contended that the Opposition CMs should go to Prime Minister or President before approaching the Supreme Court. Soren said the ruling party was using agencies against the Opposition and undermining federal structure.

Baghel spoke about the shortcomings of the National Education Policy (NEP) while Narayansamy highlighted the attack on the federal structure by not listening to the concerns of the States which reeling under crisis like pandemic, flood etc.

Last week, the Supreme Court refused to entertain a plea seeking postponement of JEE and NEET, scheduled to be held in September, saying “life cannot be stopped” and the “career of students cannot be put in jeopardy”.

The  JEE is a computer-based test while the NEET (UG) is a pen- paper-based exam. The National testing Agency said it has ensured that more than 99 per cent of the candidates get their first choice of centre cities - or cities where they will take the exams.

“Additionally, in case of JEE (Main), the number of shifts has been increased from the earlier 8 to 12, and the number of candidates per shift has been reduced from earlier 1.32 lakh to 85,000 now,” NTA said in statement.

“In order to meet the social-distancing requirements, there has been a substantial increase in the number of centres. In order to ensure proper social distancing inside the examination halls, the candidates will be seated in alternate seats in case of JEE (Main). In case of NEET (UG), the number of candidates per room has been reduced from earlier 24 to 12, now,” the NTA said.

A detailed advisory has already been issued by the agency for both exam invigilators and candidates. It includes asking students to wear masks, sanitise their hands when they enter the exam hall.