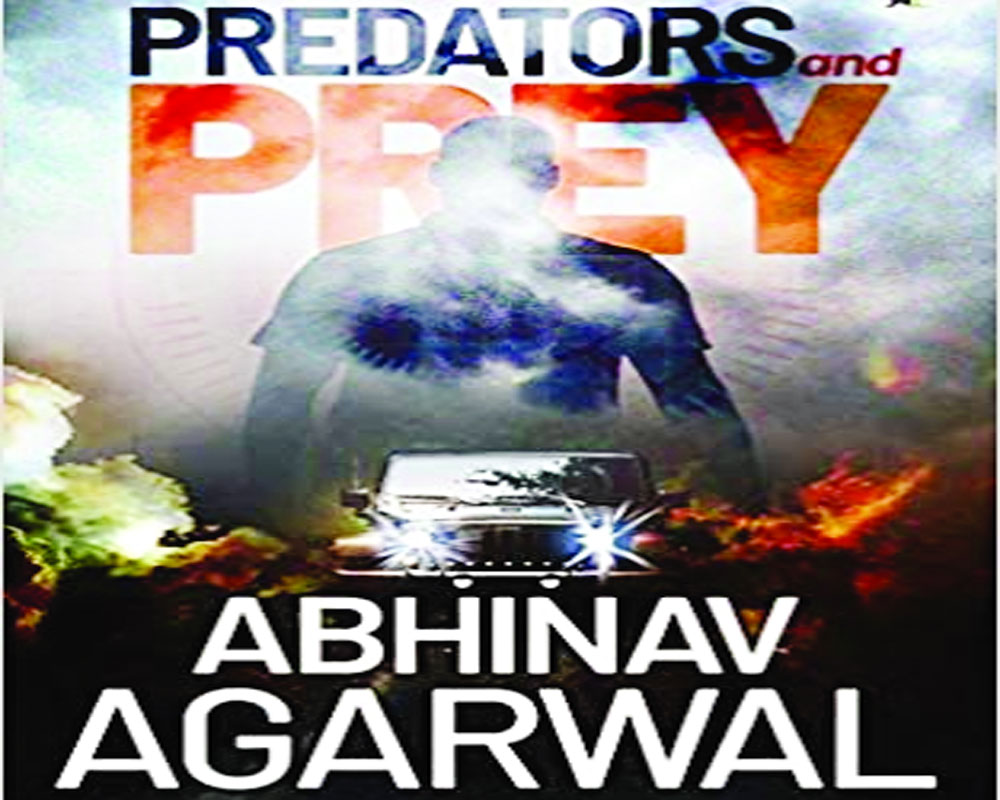 An action-packed thriller that delves into the geo-politics of this region, Abhinav Agarwal’s debut novel is a testament to his stellar story-telling abilities, writes Avatans Kumar

In an era of 280-character attention-span and myriad distractions, Abhinav Agarwal’s debut novel Predators and Prey is a 350 page fast-paced action-packed high octane compelling thriller, that holds its readers firmly tethered to the novel and to its seat.

The novel revolves around the pursuit of a National Security Agency’s (NSA) scientist Venkat. The Agency is responsible for collecting and processing domestic and international intelligence and counterintelligence data. Venkat accidentally stumbles into some incriminating information about some powerful people. Venkat, an Indian origin NSA employee, ends up committing a theft of this valuable surveillance data from the Agency. After stealing the data, Venkat becomes a fugitive and lands up in Delhi where he reaches out to his old friend Riya who works for a media company. By the time the information about this data theft comes to light in the US, Indian, Pakistani, and Chinese intelligence agencies are after him as well as Riya. In this race against time, and a thriller car ride from Delhi to Gwalior enroute Jhansi, there are elements of love, lust, jealousy, corruption, friendship, loyalty, ethics, betrayal, etc… that make this novel joy to read.

Along the ride, readers come in contact with a number of characters. Each character of this novel is a case study in psychology and personality. Agarwal introduces his characters effortlessly in the story and masterfully brings those characters to life. Venkat’s character, for example, is introduced via an engaging conversation between the NSA officers. As the story unfolds in front of readers’ eyes, so do characters and it is hard to overlook some parallels in real-life. As the story progresses, we are exposed to plots and subplots, characters and their strengths, weaknesses, and vulnerabilities. It is also hard not to feel sympathy, anguish, and outright disgust for some of them.

Agarwal shows an uncanny attention to details in his storytelling. The novel is a journey in education. As the reader flips the pages she gets educated in a plethora of subjects — from computer systems to surveillance technology; from sophisticated weapons to vehicles; from tidbits from the Mahabharata to geopolitics. For example, Deva’s description of the chip (p 37) is as technical as it is detailed. The most significant part of this description is that it is presented seamlessly in the form of a dialog which makes such dry technical details more palatable to ordinary readers:

“Sir, it is an IC — integrated circuit with PLCC surface mount. It has three lines of marking on the chip. The first lie is the manufacturer’s name, then come the alpha-numeric characters for the part number, revision, and so on…,” he trailed off for a few seconds, and then resumed. “If I am not mistaken, it is an SoC — System on a Chip. This means it is not just a simple IC, but a microprocessor, and it should also contain a graphics processing unit, though I can’t say for sure. It will have memory blocks — how much memory is tough to tell without a probe. It may also have a WiFi module, and other components.”

Some of the most vivid and gripping descriptions the novel carries is of corruption in high places. Delhi, Lutyens Delhi, or Delhi Durbar is described as an eternal whorehouse. Over a period of time, Delhi has developed an impervious and unaccountable ruling class. “Kings have sat on the throne and reigned but rarely ruled,” declares Neeraj, one of the main characters in the novel. “Prime Ministers have come, and Prime Ministers have moved on. We, on the other hand, sir ji, have been the only constant in this land for a thousand years.”, he continues.

Agarwal’s characters float effortlessly and effectively in code-switching and code-mixing — between English and Hindi. These communicative tools are part and parcel of a multilingual society like India and the author does an excellent job of showcasing it throughout the novel. Some of the Hindi proverbs (boye beej babul ke to aam kahan se hoe) used in this manner are so apt that it is hard to find an English substitute for them. In addition, they are never out of place either.

The novel delves a great deal into geo-politics, specifically of the Indian subcontinent. It gives a glimpse of the rising Chinese power and its political ambitions. We also have Pakistan, its notorious Inter Services Intelligence, the ISI, and its subversive reach throughout India. The novel occasionally dips into India’s cultural heritage to make nuanced points. For example, the novel makes a few references to the Mahabharata, the great epic, and the Bhagavad Gita.

This fast-paced drama loses some steam towards the end and the reader may feel the melancholy fatigue as she flips the last few pages. However, this is not a handicap that can be held against the first-time novelist. Predator and Prey is a well-written fiction and a great read.

The writer is a linguist who writes frequently on the topics of Indic Knowledge Tradition, language, culture, and current affairs. He is a JNU and the University of Illinois Urbana-Champaign alumnus