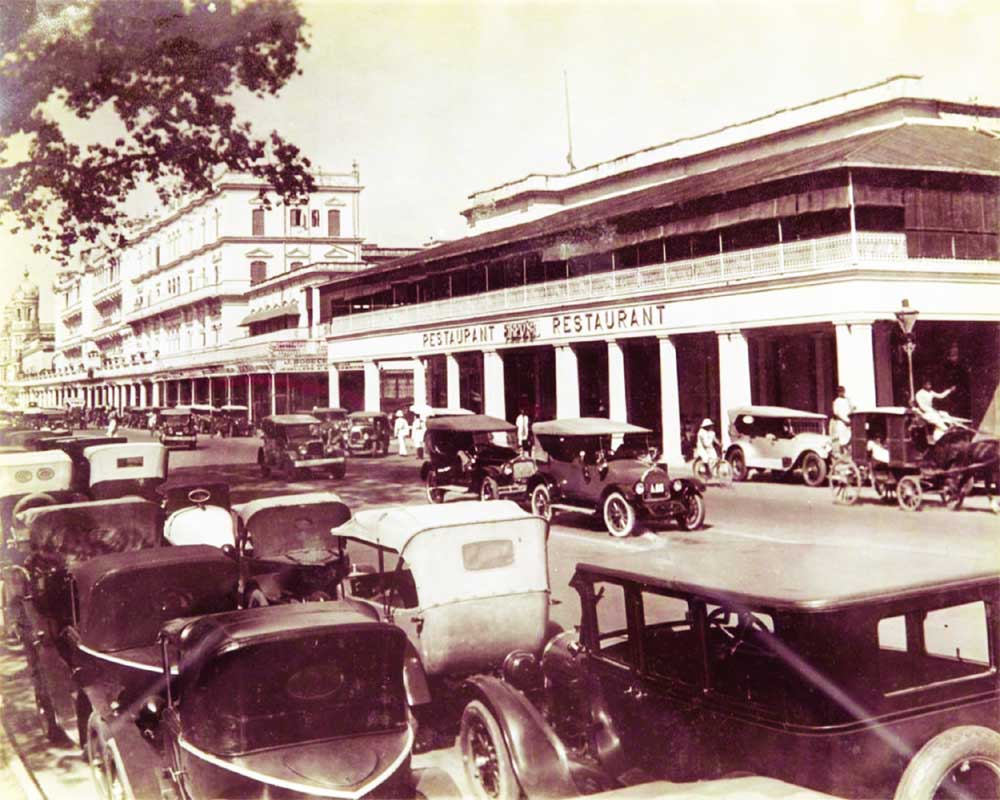 Calcutta Nights was written almost a hundred years ago and first published in Bengali as Raater Kolkata (by Hemendrakumar Roy) in 1923. Much of this book is set in a time which stretches back even further to the first two decades of the twentieth century. Calcutta was still the capital of British ruled India then — a bustling metropolis with a dark underbelly, where untold dangers lurked behind the glamour and shine, writes Rajat Chaudhuri in the introductory chapter of his book. An edited excerpt:

Calcutta. Second city of the British empire, India’s most important urban centre, Paris of the East, melting pot of all races, pride of Bengalis, cradle of the renaissance, city of palaces!

Day and night, multitudes pass through the streets-flowing like a stream. Alongside ancient palanquins from mythical king Mandhata’s times, bullock-carts and pedestrians, run ultramodern electric trams, buses and motorcars while aircrafts fly above, casting shadows on her expanse. Spectacles dangling on their noses, shod in fancy shoes and with fashionable hairstyles, the cane-wielding kapure-babus — the upper class gentlemen with social capital and recognition only on the outside; impeccably attired in western clothes over their swarthy forms; the great specimens of ingo-bongos or the anglophile Bengalis; donning curious hats and a variety of dresses the Parsis, Gujeratis, Marathis, Sikhs, Pathans, Kabulis, Nepalis, Bhutanese, Punjabis, Mongols, Japanese, Chinese and Marwaris among a variety of human specimens from the entire East; English, Scotch, Irish, French and Americans among aggressive specimens of western races, and alongside these, half-naked Oriyas, and completely naked groups of Naga mendicants … such a curious kedgeree of humanity is not to be found anywhere in the world. At one side colourful mansions reach out to the sky, and in their shadows lean mud walls of cottages plastered with dung cakes — a rare sight anywhere else. On one flank of the street, like wealth personified, are welldressed, nonchalant, vehicle-riders, blessed sons of Lakshmi — the Goddess of Wealth — ignorant to the sorrows and scarcities of the world, and on the other side, right there in the dust of the street, lying on blankets riddled with holes, worshippers of permanent destitution, hooded-eyed, skin-and-bones bands of poor beggars, gasping their last and waiting for death. And right in front of their drooping eyelids, beating huge drums — the dhaaks and dhols — and blowing trumpets, wafting flowery perfumes, their kilted scarves and drapes billowing, pass bands of the groom’s party of a marriage ceremony. Where else can one see such a crooked smile on the lips of destiny? Life and death live here together, like thorn and blossom on the same branch.

It was about Calcutta that acclaimed poet Satyendranath Dutta said:

Roughly translated it reads: ‘This Kolkata — Kalika’s ground, everyone has heard its story, Bishnu’s discus spun here — Mahesh’s feet made it holy. Here’s the abode of the Hindus’ Kali, and Maula Ali of the Musalman, Four pirs and sadhus at four corners, light the lamp of redemption, All religions have merged here, in a tune of hymn and harmony This earthly paradise welcomes, every worshipper and devotee.’

And truly Calcutta on first acquaintance looks like a city which is a pilgrimage for sadhus, a place for religious practice of devotees, and an abode of the sacred. Hindu temples of Kali, Tara, Mahadev, Sani, Jagaddhatri, Sitala, Buddhist viharas, Jain shrines of Pareshnath, Christian churches, mosques of Muslims are scattered all over — holding their heads up against the smoke swathed sky — a diversity of styles of different ideologies. At every step, a temple or the other with their crowds of devotees draws the attention of pedestrians. Scenes of religious rituals and routine prayers being offered morning and evening abound, amidst the blowing of conches, the clamour of visitors. By observing the polished floors, the bright gold ornaments of the deities, and the softness and signs of indulgence in the bearings of temple attendants, it does not take time to realise that most of the Hindu gods and goddesses are well-off.

But without a sharp eye, no one would be able to decipher the extent of wrongs, the extent of vileness and brutality concealed beneath this outward shield of religiosity. Despite Chitteswari of Chitpur at one end and Kalikadebi of Kalighat at the other keeping watch on the domain of Calcutta, every day Satan and his sinful followers enter the city in hordes, pulling wool over their divine eyes.

(‘This Kolkata on a tiger rides, ‘twas once a tiger’s den Those men who were tiger-like, would come and go often!’)

Just as in those times there were people who were like tigers, this day too there is no dearth of tigers in human garb in Calcutta. Rather the legions of these tiger-people have grown. But they are more tiger-like in their cruelty and beastliness rather than in vigour and energy. These tigers and tigresses are scattered all across the city — through the day they move about in groups amongst us. Always alert and waiting for prey, like an invisible pestilence. We don’t know them, but they have every bit of information about us at their fingertips. When at night the curtain of deepest darkness descends on the heart of Calcutta, these tigers and tigresses employing trickery, attack us unawares. Tigers of the wild crave human flesh, but these human tigers want the substance of our souls. And once someone’s soul comes into their clutches, he cannot be saved. Easy-going parents from villages, you send your naive children to Calcutta to become worthy humans. But often, under the influence of these tigers and tigresses, their humanity is drained and they return home transformed into a beast or a ghost.

No one should be fooled by the outward sheen, the glamorous beauty, the light and laughter, the mock-religiosity, the crowds at temples, churches and mosques of Calcutta. How much darkness has congealed at the lamp’s base — today we will reveal some of those secret scenes. We spend our lives cradled by this Calcutta; our lives, our deaths, our marriages are in sync with the rhythms of this Calcutta, our hearts are full with pride and we feel honoured being residents of Calcutta. Yet how many among us have seen the true face of Calcutta? How many of us dare to roam about in the silence of the deepest night amongst Calcutta’s scary and impassable forest of palaces? How many are interested to know about the romances unfolding, the fascinating incidents, the tragedies being played out around us each day? What is the value of a report in the morning newspaper? Braving great dangers, time and again avoiding the knives of hoodlums, in the spirit of adventure, I alone, like a creature of darkness, just a short and stout stick on my person, have regularly roamed the streets of Calcutta from evening till the end of night. Without bothering about moral corruption, I have entered evil and forbidden places with no hesitation. My long experience cannot fit into these pages. Here I will provide some glimpses, some hints. If readers enjoy, then in future I will try to describe different facets of Calcutta in greater detail.