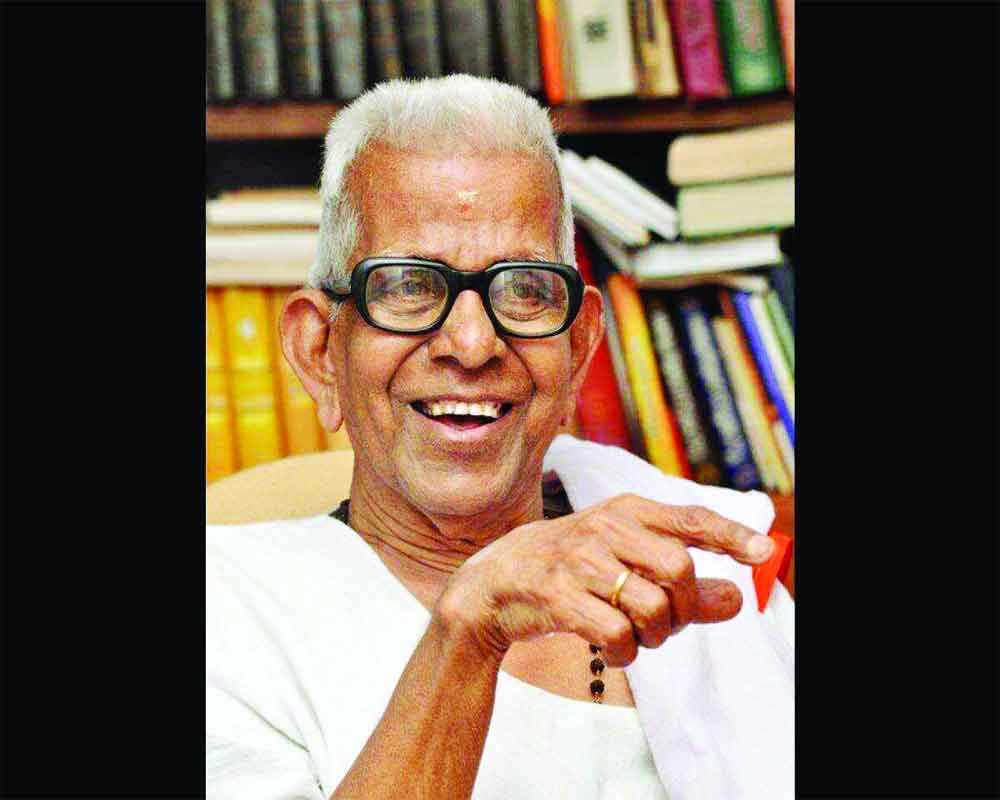 Akkitham, as he is popularly known, is South India’s one and only Maha Kavi (great poet) whose works have played a major role in demolishing and destroying orthodoxy and conservatism associated with the Brahmin community — to which he too belongs. Aged 94, he is the last surviving social reformer, who revolutionized the lives of not only the Namboodiri households but even that of people belonging to lower strata of the Kerala society.

“I would like to be remembered as an astrologer,” remarked the nonagenarian, when he learnt of the award. “My forte has been astrology, a science. I learnt scientific astrology. Poetry is only a hobby. I scribble occasional thoughts that came to my mind,” he said, from Devaayanam, the poet’s mana (traditional Namboodiri house) at Kumaranalloor in Kerala’s Palakkadu district. Despite his age, the poet is alert and well in control of his faculties.

Powerful with words, Akkitham set the state’s cultural and political platforms ablaze with his revolutionary poems in 1950s and 1960s. He had forecasted the collapse of Communism and disintegration of the Union of Soviet Socialist Republic (USSR) way back in 1970s. He has not written much of poetry in the last two decades as he has been busy with translation of Sree Mahabhagavatham, the great purana of Bharata, into Malayalam.

“We could not have asked for more. I rate this as literature at its peak,” said Rameshan Nair, a poet and long-time associate of Akkitham of the translation. Nair himself is the winner of 2019 Sahitya Akademi Award for poetry. Akkitham’s friends including Jeevan Kumar, editor, Yajnopaveetham and Prof K P Sasidharan of Kozhikode feel the award should have been conferred upon poet at least two decades ago. “Akkitham is a natural poet. The new age writers are light years behind him. They are yet to pen down lines which would get engraved in our minds,” said Prof Sasidharan, former head of the department, Malayalam, Guruvayurappan College, Kozhikode and Kerala’s leading literary critic.

The author of The Epic of the 20th Century, the best poetical work to emerge in Malayalam literary landscape sans any media blitzkrieg was his humble self when we caught up with him. “Everything is decided by God. Daivadheenam Jagatsarvam! Nothing belongs to us. Everything is pre-destined,” he said, pointing to the sky.

He attributes his powerful expression to his knowledge of Sanskrit and Sanskrit literature. “The great poets of yesteryears, namely, Ulloor S Parameswara Iyer, P Kunhiraman Nair, Kumaran Aasan, Vallathol Narayana Menon, Edassery Govindan Nair, Olappamanna Subramanian Namboodirippadu, Vailoppilli Sreedhara Menon were all Sanskrit scholars. Their works had originality in them and they wrote literature unparalleled anywhere in the world. Where do we find such writers now? Sure, novelist M T Vasudevan Nair fits the bill. But others do not have that power to move,” said Akkitham.

Even as the grand old man of Malayalam poetry laments the missing spark in the Malayalam literature, he points that literature — be it poem, novel, short story or drama — is an ongoing process. “What Valmiki and Kalidasa wrote were based on their own world of experiences. Every person on this earth has his/her own universe of experiences and they should be able to realise the same. Remember the old Persian saying: ‘You fool, look into the heart and write!’,” he points out.

A rebel and reformist at heart, Akkitham played a major role in getting rid of some of the outdated and irrelevant traditions prevailing in the Namboodiri community. Re-marriage of Namboodiri widows and Namboodiri women going out for work were unthinkable and unimaginable even during the early years of the 20th century. He, together with V T Bhattathirippadu and E M S Namboodirippadu (the first chief minister of Kerala), worked overtime and made use of all platforms and avenues to end the social evil and dogmas in the community.

The poet blames the complacency which had set in the Namboodiri community as the reason behind these social evils. “We ourselves are to blame for the same as the Namboodiris were financially sound, up in the social hierarchy and had nothing to worry about. But when they hit a low in life and faced difficulties, they had to change and permanently at that,” said Akkitham.

The same was the case with the oppressed classes who were denied opportunity to learn Sanskrit, Vedas and Upanishats for centuries. Akkitham led the social revolution which turned the prevailing customs upside down and threw the doors opened for people from the lower strata to learn the great Indian system of knowledge and tradition. “I was totally against the practice of Brahminism by an exclusive class. Nothing should be denied to the people of this great land in the name of religion, caste and class,” said Akkitham.

The Sri Ramaswamy Temple at Kadavallur near his hometown is a standing monument of Akkitham’s tenacity. The annual anyonyam (an intellectual debating event) on Rig Veda held in the months of November-December sees vedic scholars from all over the globe assembling at Kadavallur. Only the best scholars graduate as champions. The age-old vedic debate contest is held under the supervision of Kadavallur Anyonya Parishath and is described as the only event of this kind taking place anywhere in the world.

Akkitham who has authored thousands of poems in his 94 years (and counting!) and who was described as ‘Left of the Centre’ writer suddenly became a persona non-grata for the comrades when he questioned and challenged the social evils being practiced by the Marxists. The CPI(M) is known for its ideology of physically annihilating the enemies. This was unacceptable to the poet in Akkitham who questioned the practice in his works like The Legend of the 20th Century and other poems.

The poet blames the inertia that has set in the governments which ruled India since 1947. “The first thing they (the governments) should have done was to ban religious conversion. Besides the creation of Pakistan by tearing apart India, the unbridled freedom given to the foreigners to convert Hindus to other religions played havoc with the soul of the country. Mahatma Gandhi was against religious conversions. It is sad that we failed to read what was in the heart of Mahatma,” said Akkitham, while addressing the Gandhi Peace Foundation delegates at Kozhikode in Kerala. “Even a Gold Vessel cannot cover the power of truth,” he went to quote from a shloka.

Akkitham Achuthan Namboothiri is not enthusiastic about discussing poetry, any longer. “My mission as a poet is over. It is my passion in astrology which sustains my energy and spirit. Now it is for the younger generation to take off from where me and my colleagues left. The world of literature is vast and is in an ever-expanding mode. So, there is lot to write and a lot to speak… It is an Akshaya Paatra, which is eternally overflowing. Those who are keen to write poems and stories can derive unlimited spirit and energy from it. But please remember, don’t write just for the sake of writing. If you do that, it will never be literature,” advises the poet before rounding up our session.

True, such legends are rare to come by. We are lucky to have him among us.