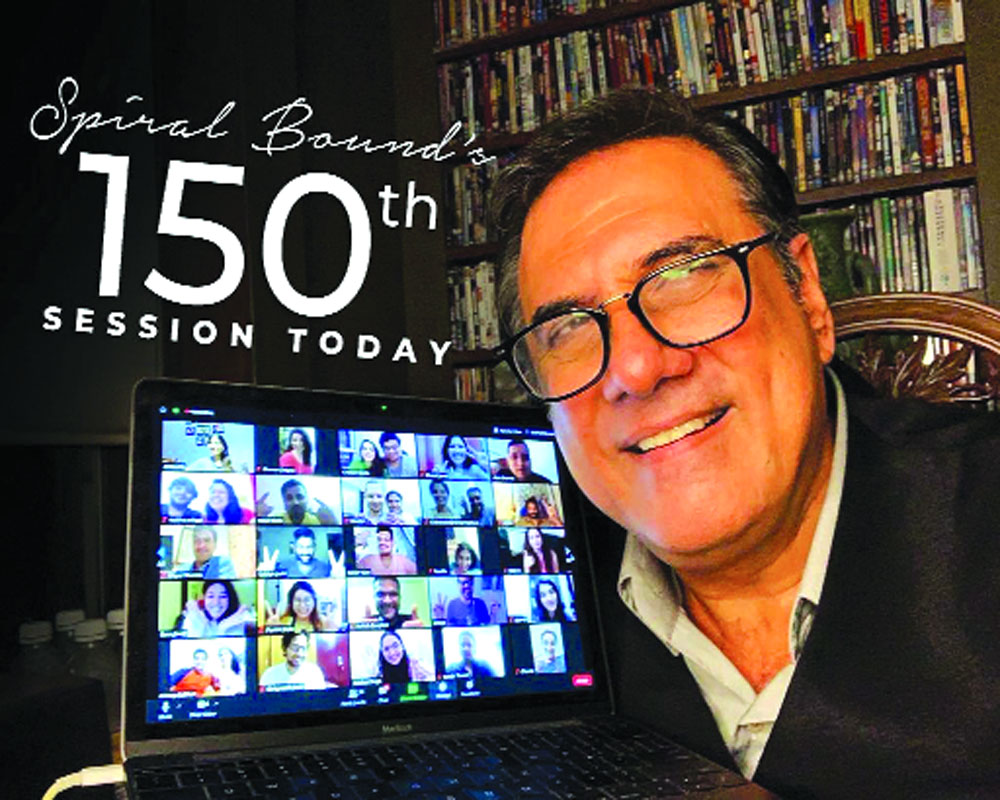 The actor-screenwriter has completed over 150 sessions of his online screenwriting series, Spiral Bound. He tells Chahak Mittal how his skills evolved with each interaction and made him learn more in the process

How often have you seen characters from films come alive in reality? Well, when actor-screenwriter Boman Irani took to the online space to conduct screenwriting sessions during the lockdown, we could certainly remember his character, Viru Sahastra Buddhe from 3 Idiots.

In the pursuit to capturing and presenting the roots of cinema, Irani chose screenwriting to be his subject as it forms the very basis of cinema. The actor has been mentoring over hundreds of students and screenwriting enthusiasts and professionals. And today, as he completes over 150 sessions of the series, Spiral Bound, he tells us about his incredible journey of mentoring. Excerpts:

How did you conceptualise an online screenwriting series?

It began more than half a year ago when I was launching my production house, Irani Movietone. Spiral Bound was born at the launch party.

I called up my dear friend, Alexander Dinelaris, who is Oscar-award winning film Birdman’s screenwriter, post the launch to take a workshop for some 280 screenwriters.

This was an extension of that workshop, which we were supposed to have a second round of, this year. We couldn’t due to the lockdown. However, later, the lockdown turned out to be a perfect opportunity to do Spiral Bound virtually. And since it took so long to reopen, we’re now close to completing 160 sessions. Hitting 150 was certainly a landmark!

What was the research involved?

Some six to eight years ago, I had started writing my own script but even after working on it extensively, I constantly felt that it lacked something. So I took some help from my friend and became a student in New York for a year. There, I did a lot of reading, extensive writing and research. Today, eight to nine years down the line, thanks to my gurus, I feel that the knowledge that I may have acquired, it would be great if I could share that with my fellow writers and screenwriting enthusiasts and professionals. And why not? We need good screenplays and writers.

Why did you name the series, Spiral Bound?

When you finish writing your first draft of a script, and get it’s first print, instead of putting it in a folder or stapling together, you always prefer it to be spiral bound!

What was your approach while mentoring hundreds of students online?

Screenwriting was already on my plate, much before the lockdown. It’s just that we got a lot of time and opportunity to do it then. We started with four students and young writers who had been in touch with me over the years and I’d share with them some problem-solving questions over the phone. At times, they’d come over and we’d discuss and deal with their queries. During the lockdown, I started hearing them out online when one of them said if one of his friends could join the session, and I was like ‘sure!’ This way, four became eight and 16 and now there are 200 of us!

Do you think actors/directors should engage more in such personal, live interactions about film subjects?

I have myself given it a thought many a times that actors and directors should engage in such personal and live interactions. I think it’s important. I am not saying that I have an authority but yes, we do have a certain amount of experience working in films and why should we not share it. Apart from learning from my own guru, I have learned the best from all the experiences that I have had over the years. I have worked with the best directors and some of the finest writers and, along the way, learned from their experiences. I really feel mentoring young writers, directors and actors is important because through this, we’re going to raise our own game. Even if it is good, it needs to be raised, everyday.

Well, art is about reinventing and telling stories in more modern and post-modern ways. Your experiences should be shared and should help others create their own and newer ones. It is definitely a great idea. And I hate to say that lockdown turned out to be a good thing, but if we do try to do something good, we can create  opportunities for ourselves while staying at home, too.

Today, the focus has shifted to OTT platforms and content-driven projects... How did you address this in your sessions?

I agree that with the OTT platform, the attention has been shifted to content. However, I think the term ‘content-driven’ is very hyped and very loosely used. I think all films, even if you’re making a commercial one, should have content even if they’re just entertainers. The content should be understandable, engaging and entertaining.

I realise that we are talking about OTT platforms especially at a time when cinemas are shut, but when the cinemas open and we have the big screens available to us again, I think films should have, if not unusual story ideas, an entertaining story. It should be far more thematic to say the least.

How do you think stories and themes for films will include this period in the future? Is COVID going to bring a major revolution in how films/series portray real life?

I genuinely feel that COVID time in our life is just a period, be it  six months of lockdown, a summer, more than a summer, a year or even more than a year. Periods, events and incidences — these are just the backdrops, which are just tracing the trials and tribulations in a human being’s life. That event could be war time or even of peace. But eventually, a human story is always about pursuit, about what s/he wants and thrives for constantly. S/he has to undergo a lot of hardship to achieve that and those accomplishments come in people’s life in various ways. The story is only about that goal, no matter whether the backdrop is COVID, war or robbery or even circus.

The story that you should be following is the goal that a human is trying to achieve and the obstacles that he goes through to achieve it. That is what is called thematic. And COVID is just a force. The more important part is how human beings react to that.

Completing 150 sessions... How did you see the process evolve through each session?

I never expected the Spiral Bound family to go on for so long. We have gotten together as a family and used this sacred time to learn. I don’t know when people would be able to go out and learn to make up their careers for themselves. They wouldn’t get a period like this to actually learn.

Even if we say that a person is always a student and learning something. For a statement, it is valid; we learn as we grow and from our experiences. But how often do we actually study something after we’ve finished off our school or college? How many times do we actually sit down and study post that? How often do we master a new subject or a discipline? No, we don’t study all our lives.

But this has been literally people coming together and studying, making notes and learn something new. Whenever people are talking about their respective projects, I asked them to stop thinking about them for the time being. I just wanted them to imbibe something everyday and then apply to that to all the problems they wanted to overcome. Because it’s not going to come back in our lives and I am not saying this with remorse, rather with happiness. I hope the lockdown period as it is doesn’t come back again because I don’t think we should be sitting at home. But again, now that we are, I think it would be incredibly stupid of us not to utilise this time learning something.

Anything about shooting during the current times, since you’re working on Jayeshbhai Jordaar?

Well, Jayeshbhai Jordaar is almost complete. We didn’t have to work a lot on it after the lockdown. There’s just a little bit of dubbing that is left.