Message in a room

Message in a room 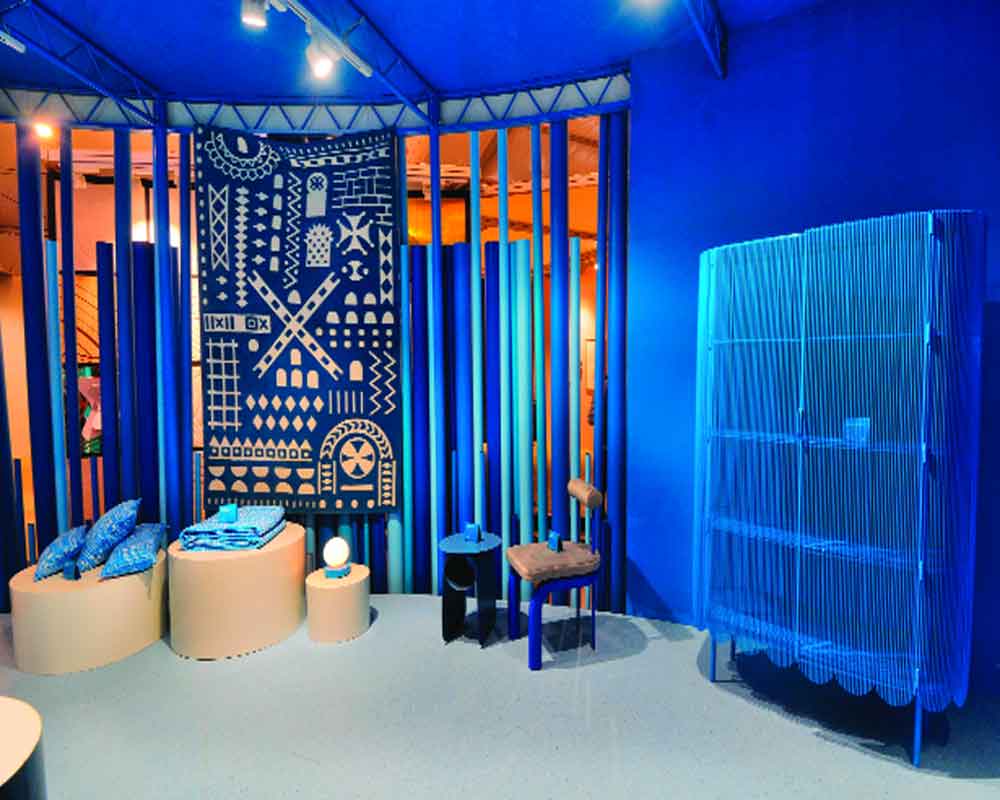 Through songs and poems of literary figures, and objects telling tales of their existence, the India Design Week 2020 had meaning woven deep within its exhibits, says Sakshi Sharma

A small, white tent made of mild steel and tensile fabric stood in the middle of interior designer Iram Sultan’s booth at the India Design Week. Titled One, the words, “create,” “happy” and “love” were written in various Indian languages on its surface. Rabindranath Tagore’s poem, Let My Country Awake, occupied its centre. It invited people to question their existence and define themselves in a world divided by hate. At a distance, was another installation, Hope Has Wings. It was a curved black board depicting different shades of human emotions through a number of corked pegs spread in the shape of a butterfly. As one crossed the installation, one could hear Emily Dickinsons’ poem Hope Is A Thing With Feathers, on loop. It was narrated by voices of different age groups. If there was one message that went out, it was that creativity is about unboxing the mind and setting it free. Surely, this will inform design disciplines of our times.

Another major design with a message was What’s Your Story, a collection of 30 objects from around the country, each telling a tale. Presented by Bengaluru-based architect and designer-duo Sandeep and Tania Khosla, the stories were broadly divided into themes like — craftsmanship, conscious consumption, whimsy and beauty, nostalgia and memory, and functionality and accessibility. The objects, ranging from layered bowls to bamboo armchairs, low-lying wooden tables and penta-cluster lamps, drew attention because of their uniqueness and neatness. However, it was the asymmetrical single seater swing, Cocoon, by Nishita Kamdar and Veeram Shah, that stood out. Made from teak wood, cane and brass accents, the piece stirred nostalgia and reminded one of the single-seater wooden swings in the aangan (lobby) of Indian homes — just with a hint of luxury. It reflected the idea of sitting completely at ease or reading a book with a lavish armrest to lean on.

For Sandeep, his collection isn’t just a piece of “good design” but also a result of his various questions to himself, the most important of them being, “Why do we make whatever we make?” He said, “How does an object add value to our already cluttered lives? Does it connect with us emotively, to transcend time and to sustain, not just physically but in our beings? Does it uplift us from our everyday monotony? Should objects be providing sustenance and livelihood to communities that make them? Should beautiful objects and good design be for a privileged few or is accessibility an important filter? In putting objects together for this show, we have considered these compelling questions. We paused to ask ourselves why we respond to certain objects and began digging deeper to uncover the stories behind them. We took a step back to think about what objects really have a ‘reason to exist’ — in these manic times of excessive consumption, transience and a depleting planet.”

If mindful living is the new credo, then there are more ideas to be inspired by at the design fair.

A lagoon bed by Script would make one recall the minimalistic decor trends that have been ruling for a while. Products like storage beds, sofa-cum-beds, collapsible shelves and storage seaters have been in great demand and will continue to be, but here, we found some twists. The sound-absorbent bed, with acoustic foam on its sides, at the booth catered to aesthetic as well as functional needs. A small side table and a book shelf was attached to it and there was extra lumbar support for a comfortable seating — a perfect space optimisation, especially for the urban loft.

We came across a gender-neutral kids’ bedroom. With a subtle play of pastel green and blue, and grey, the bed had a hut-like slope on its head. On its corner, was a quirky desk attached to make study space a bit more exciting. With wooden panels on its other corner, it seemed as though little windows were attached to the bed’s end. An orange clock was hung on its side, the perfect angle of placing it in the room. Conceptualised by Habios, spokesperson Abu Laskar said, “The minimalistic trend seems to be rising. That is why we have brought such a kids’ bedroom this time, which occupied less space yet comprises more elements. We’re glad people are liking it.”

We all know that the Pantone colour for 2020 is Classic Blue. The fair made the most of it. Almost every product had an accent — some minute, some overpowering.

Bathline had it all blue — right from the flooring to the ceramic basins. Said owner Mehak Jain, “Blue has been the favourite colour of bathrooms initially too and now the trend seems to be back.”

Next in line, Nivasa showcased how the colour is alluring but needs proper use. “The best part about this colour is that it can be used in various patterns, furniture, wallpaper, accessories and much more,” said the spokesperson.

Wildlife... save it to cherish or leave it to perish

Wooden plates shaped as turtles, silver-coloured crocodile sculptures, showpieces with animal prints, and many more such pieces that had in them an element of wildlife, seemed to have taken the centre stage. Lotus arts de vivre, a home-décor, jewellery and handbag company that deals with natural wood, exhibited the Spiriting Cheetah — its only installation — at the centre of the booth, called the Safari collection. Made from bamboo, iron and teak wood, the artwork was a major attraction for the viewers. “It weighs 100 kg. It took two months for us to prepare it,” said the spokesperson. Beside it, was a tree trunk, which appeared to have retained its original shape. On it lay a small silver cheetah and some silver-coloured artificial leaves. They have tried to retain the original texture of the wood so that it appears more natural.

The fair seemed to strike a balance between luxury and sustainability as a more mindful way of life. Sustainability will continue to define our choices in climate-challenged times.

Brands such as Emanate Homes and The Park Hotels exhibited transterior spaces, ones which are open and mix the interior with the exterior effortlessly to utilise a room in multiple ways. The French doors that allow natural lighting is another judicious way to utilise energy.

Edida India featured bamboo chairs, buckets, stools, chandeliers and mats. Hung on a teal blue wall, the products reflected this concept well. There were some carpets made from different coloured natural fibre, Sisal, and the leaves of agave plant, too.

Iqrup and Ritz’s peacock indoor cane chair was a perfect example of how durability and sustainability goes hand in hand. “We have attempted to span from limited-edition and luxe to mass-produced and accessible — each resonates with us as a piece of ‘good design’.”

Inspired by opera, an Ophelia table lamp, by Josmo studio, gave a setup of eclectic colours, transporting one to a theatre evening.

Sustainability means that there has been a cultural shift back to tradition manifesting itself in tribal artforms, indigenous artworks and much more. A first timer brought Mata-ni-Pachedi paintings, a form of Gujarati Kalamkari.

What grabbed our attention were the Gond sculptures from Madhya Pradesh and Maharashtra, which were basically faces carved out of wood in the form of some protective deities. Besides it, the ‘Bhuta’ masks from Kerala, made from bronze metal casters, looked like a symbol of god. “It originated in Tulu district of South Karnataka where Bhuta is celebrated every year to honour local deities. We wanted to showcase all our works at a cultural level so that they represent the process that an Indian has gone through over the years,” said the mask-maker.

Jaipur Rugs, known for launching something new every year at the fair, exhibited a carpet with over 3,000 colours. It launched a new collection by Italian designer Matteo, Jaipur Wunderkammer. It was inspired by the designer’s visit to the city. A pink wool and viscose rug, showcasing ghungroos tied to a foot on its four sides, was inspired by a dance performance that the designer had seen at the Hawa Mahal. Lying on the floor was another brown-coloured carpet with orange linings and blue intersections. “It depicts the architecture of Jaipur’s various palaces through vintage doors and jharokas (windows). We set the trend every year,” said representative Vikas Chaudhary.

What’s Your Story, too, had a section of hand-knotted Kolam carpets inspired from ancient South Indian ritual of creating patterns with rice powder.

Well, when more than 20 architects and designers come together, objects have a reason to exist, are timeless and certainly add value to people’s everyday lives.