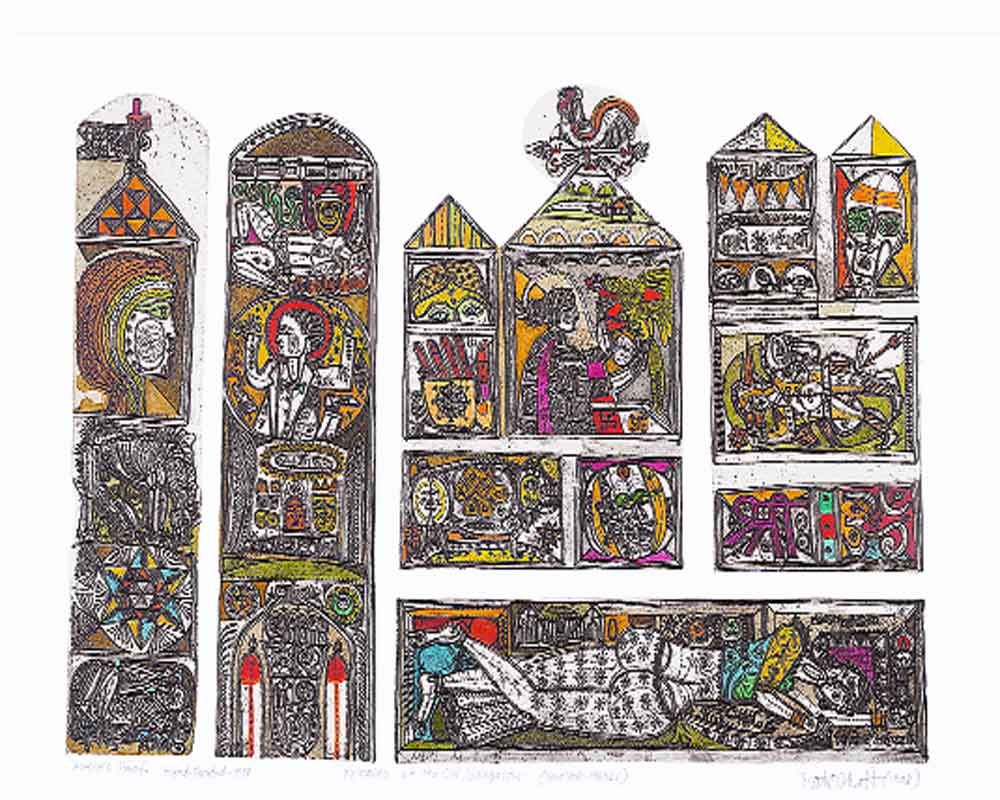 Printmaker and photographer Jyoti Bhatt’s excursions to different villages inspired him to create a personal language of symbols through intaglios that came from indigenous cultures. By Uma Nair

Photographer, archivist, printmaker and visual historian, Padma Shri Jyoti Bhatt belongs to the arc light of Indian artists who have spent six decades exploring India’s indigenous arts. Over the years, it is Bhatt’s investigations of rural and tribal designs that have influenced the motifs he has used in his printmaking. He has been actively engaged with intaglios since the mid 60s and these images constitute an important chapter in the history of printmaking in India. They demonstrate great artistic sensibilities, creativity and a unique understanding of traditional cultures. Each print can be seen as an artwork in its own right as well as a historical document. His works set him apart as an ethnographer.

Through his show of original intaglios at Bihar Museum, starting today, he goes back in time. Here are some excerpts:

Tell us about your photograph documentation that began in the 1960s.

In 1961, I won an Italian government scholarship to study at the Academia Di Belle Arti in Naples for two years. From Italy, I went to the Pratt Institute in New York, where I received a Fulbright fellowship. I was trained in the graphic arts and began to take a particular interest in printmaking.

When I returned in the 1960s, I was asked to take photographs of the Gujarati folk art for a seminar at the Bhartiya Vidhya Bhavan in Mumbai, keeping the disappearing rural arts in focus. I was asked to chronicle the arts and indigenous practices of rural parts of Gujarat, Rajasthan, Haryana, Madhya Pradesh, Odisha, West Bengal and Bihar from 1967 to 1995. I travelled extensively, visiting villages and tribal regions, photographing folk arts and craft traditions in their local areas, as well as people who inhabited these spaces. Those folk and craft traditions became part of my intaglios.

It is said that at the MS University in Baroda, you became a catalyst for other artists picking up printmaking as a genre. Would you like to reflect on those days in the 1960s?

When I began, my early works were influenced by cubism as well as lighthearted and colourful pop art kind of imagery. It was inspired by traditional Indian folk designs.

It was in 1966 that I returned to MSU Baroda with a thorough knowledge of the intaglio process that I had gained at the Pratt Institute at Brooklyn, New York. I found intaglio exciting. The thought that so many prints could be made was a sense of commonality I believed in because I didn’t like the idea of elitist art. This caused friends such as Jeram Patel, Bhupen Khakhar and Gulam Mohammed Sheikh to follow the same process. At the Faculty of Fine Arts in Baroda, we were soon known as “The Baroda School” of Indian art.

When we look at your work, we can also find a wide repertoire of historical evidence. How did you explore such a wide variety of practices?

I knew that when I began, I had to include whatever I could capture on my frame. Cultural evidences have a wide canvas so I was looking at tribal musicians and women who had mastered pottery, to artistes and dancers, weavers, wall painters and even children. Sometimes I would walk into a makeshift hut and see the wet wall and suddenly see the calf ready to shut his eyes and sleep. That is how I got the image, Calf (Madhya Pradesh, 1983). Their cattle were as important to them as their family members. When it comes to art traditions, people and their environs are the most important.

I was looking at a world that was full of rural rhythms in the simplest of circumstances. For instance, in A tribal house from rural India (South Gujarat, 1987), a mother and her child are sitting against a wall in their hut. Resting next to them are tools and impediments, some household appliances and weapons used by the tribal folks. The tools are shown as an impression on the wall. And I observed that the villagers were so simple yet full of their own elemental ideas. Life in the village has its own tranquil pace and their creative pursuits are what engaged me throughout.

Your prints reflect the ingenuity of indigenous iconography. Please reflect on this journey.

My focus has always been on the surroundings. When I look at it now, I see that it presented a holistic perspective in an age where traditions are vanishing. Everything had its own significance. You call it a slice of history but I would say that it is a living moment in the lives of the humble.

Printmaking for me became a process of rich imagery and a residue of living traditions. I recall how in Rajasthan, the intricate floral patterns of a rangoli or a mandana, painstakingly created by a woman in the courtyard of the house, were important statements of a rural lifestyle that we hardly see anymore.

Many of the artforms I photographed even as late as 1994 are not visible anymore. The number of people who made them have lessened. Most of these traditions have started losing their essence. For instance, people now buy Kolam — the Rangavalli designs — in the form of plastic stickers from shops within South Indian temples, which, ironically, have supported this tradition the most. I used the designs in my prints as a motif for longevity.

In later years, in my etchings, intaglios and screen prints, I also tried to explore a personal language of symbols that belonged to indigenous cultures — peacock, parrot, lotus, stylised Indian gods and goddesses, and some unending variations on tribal and village designs — which became part of my iconography. Now I am happily exploring inkjet digital printing and holography. I like the multiplicity of print. I am happy that many art lovers can buy my prints.