A thick hide is a must

A thick hide is a must 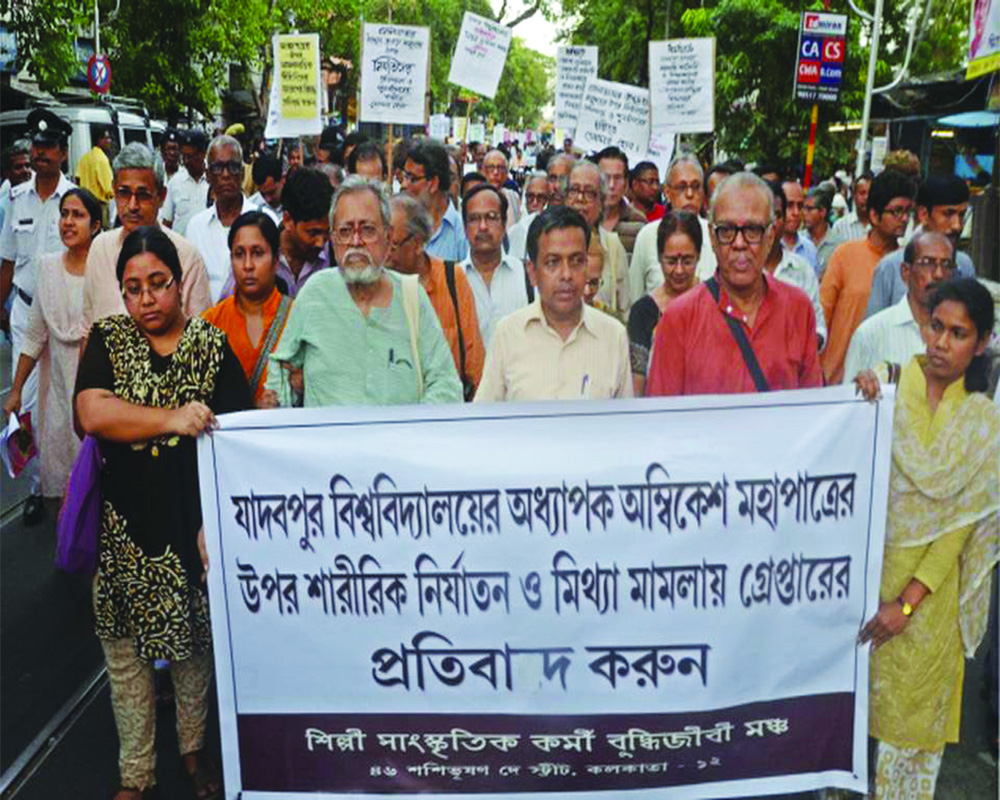 As a growing number of CMs takes umbrage at being criticised, they'd better understand that getting flak is a professional hazard in public life

The recent judgment of the Allahabad High Court upholding the freedom of expression guaranteed under Article 19(1)(a) and chiding the State of Uttar Pradesh (UP) for malicious prosecution of a person who had criticised the Chief Minister for “poor handling of law and order in his State”, should hopefully have a salutary effect on the State Governments which have been recklessly using penal provisions in our laws against those who express dissent.

The case pertained to a First Information Report (FIR) lodged in August 2020 against Yashwant Singh, who put out a tweet criticising the Chief Minister for transforming the State “into a jungle raj in which no law and order prevails”. The tweet also made reference to various incidents of abduction, demand of ransom and murders. He was accused of violating two provisions in the law — Section 500 of the Indian Penal Code (IPC) pertaining to defamation and Section 66D of the Information Technology (IT) Act, 2008, which pertains to personation, or what is commonly understood as impersonation. Yashwant Singh petitioned the High Court and sought the quashing of the FIR.

The petitioner’s counsel contended that the right to comment on the affairs of the State was well within Yashwant Singh’s constitutional right envisaged under Article 19 of the Constitution of India and that “mere dissent does not amount to criminality”. Hence, the FIR registered against him was mala fide “and was meant only to coerce him to stop expressing his dissent against the State Government”. He also contended that no offence had been made out and that the FIR should be quashed.

A Division Bench, comprising Justices Pankaj Naqvi and Vivek Agarwal of the Allahabad High Court, has made a succinct but significant observation while quashing the FIR and other proceedings against the petitioner. Referring to the charge of “defamation” under Section 500 of the IPC, the judges said that no case had been made out “as the alleged tweet cannot be said to fall within the mischief of defamation”. The judges struck a blow for democracy when they said that “expressing dissent on the law and order situation in the State is a hallmark of a constitutional liberal democracy like ours, constitutionally protected under Article 19 of the Constitution”.

The second charge against the petitioner pertained to violation of Section 66D of the IT Act, 2008, which states: “Whoever, by means of any communication device or computer resource, cheats by personation, shall be punished with imprisonment of either description for a term which may extend to three years and shall also be liable to a fine which may extend to Rs 1 lakh.” The judges analysed these provisions vis-à-vis the allegation made in the FIR and said that they did not find “even remotely” a commission of offence under Section 66D, as the said provision relates to cheating by personation and it is not the case of prosecution that while committing the overt act, the petitioner tweeted using somebody else’s twitter handle nor was there any allegation of cheating. Hence, the court concluded that no offence had been made out under this Section as well.

As far as the State is concerned, this is indeed a damning indictment of the Government and the police. To prosecute a citizen for criminal defamation — which can entail a fine or a jail term which can extend up to two years — because he is disappointed with the Chief Minister’s handling of the law and order situation is something unheard of in this country, and the judges have rightly ticked off the State for doing so.

But this scenario is not confined to UP only. Several other Chief Ministers and State Governments have begun challenging the basic freedoms given to all citizens by the Constitution. The State of West Bengal would head this list, not only for the sheer number of such cases but also for starting this trend of jailing its critics. It all started with the Mamata Banerjee Government arresting Prof Ambikesh Mahapatra of Jadavpur University and his friend in 2012 and charging them with offences under the IT Act for circulating cartoons lampooning the Chief Minister. Following his arrest, Prof Mahapatra moved the State Human Rights Commission, which criticised their arrest and directed the State Government to pay each of them a compensation of Rs 50,000. The State did not comply with the directions of the commission, compelling the Professor to move the Calcutta High Court. The court upheld the rights commission’s order and enhanced the amount of compensation payable to Prof Mahapatra and his friend to Rs 75,000 each.

Even more absurd was the sedition charge slapped on a folk singer in Tamil Nadu in 2015 for criticising the then Chief Minister J Jayalalithaa’s policy on the issue of prohibition.

The Communist Party of India (Marxist)-led Kerala Government was unhappy with the State Lalithakala Akademi’s decision to select a cartoon, which mocked a Bishop accused of rape, for its annual awards. Several Christian outfits and the State Government wanted the autonomous body to re-consider its decision. The Akademi, however, did not relent.

Those of us who are senior citizens, have lived and thrived in a healthy democratic environment in this country in which we have said much harsher things against the persons in power. At the height of the controversy over the kickbacks paid by Bofors, the Swedish arms manufacturer, to Indian politicians and others, the Indian Express ran Ram Jethmalani’s famous 10 questions to Prime Minister Rajiv Gandhi every day. Reading those questions, Rajiv must have squirmed every morning but he had to grin and bear it!

In fact, many of these Chief Ministers must look at how Prime Minister Narendra Modi deals with those who abuse him on the social media. The Modi-baiters constantly upload cartoons and memes seeking to ridicule him on Twitter and Facebook. They often generate hashtags like “#WorstPrime-Minister” or some such and begin a trend along with their camp followers. On his last birthday, they created a hashtag,  “#NationalUnemploymentDay”, and kept it going the whole day. He is probably the most trolled Indian. Often, his political enemies cross the limits of decency. As Modi himself said at a public meeting during the last Lok Sabha elections, a Congress leader called him “gandi naali ka keeda” (a gutter insect) while another said that he was a “mad dog”. Can there be anything more defamatory and abusive than this? If the Prime Minister’s Office were to prosecute all these people, Modi would need to create a full-fledged department to handle these prosecutions.

In fact, this is one of the professional hazards of being in public life in a democracy and, over the years, and especially in the age of social media, the politicians across democratic countries — including India — have learnt to develop a thick hide. Some of our Chief Ministers must follow suit.