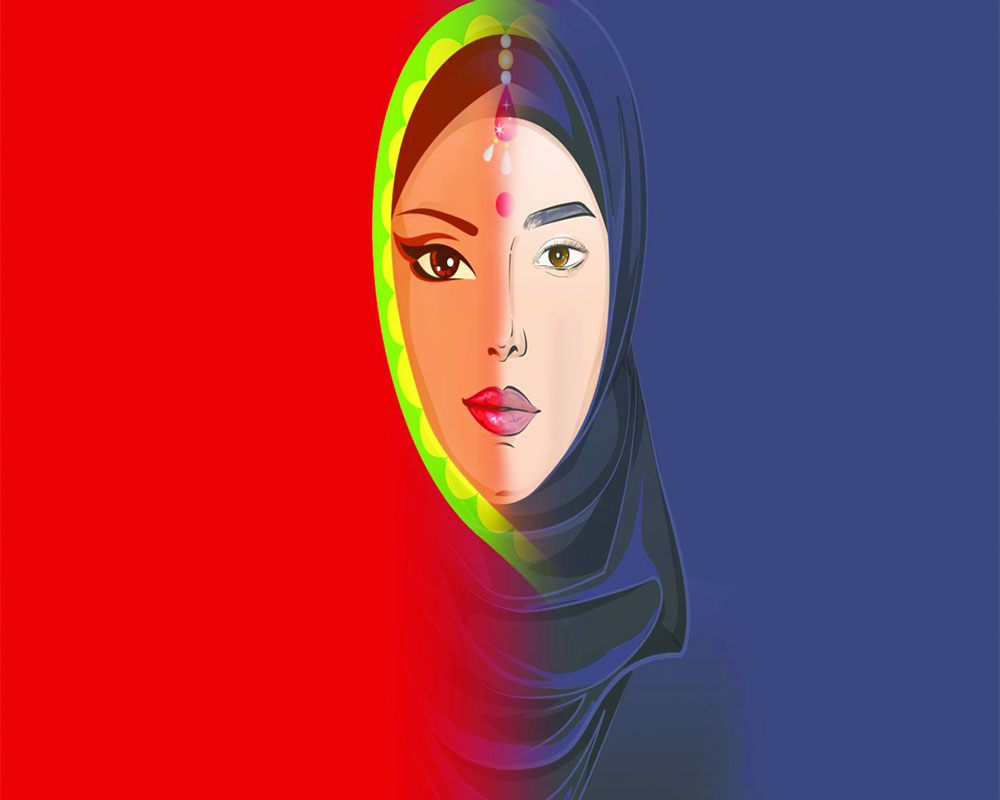 Islam does not allow conversions for the sake of marriage. One has to convert out of love for the religion and not for any other reason. But still forced conversions take place in India and Pak

Forced conversions are not new in the subcontinent. Reports regularly pour in from India as well as Pakistan about illegal conversions of women/girls through force, deceit or other methods which are in contravention of the law of the land. The issue was highlighted after the Uttar Pradesh (UP) Government brought a legislation termed the Prohibition of Unlawful Conversion of Religion Ordinance, 2020, that is meant to stop forceful conversion of women/girls from other religions to Islam, which the Right-wing sympathisers  call  the “Love Jihad Act.” Around the same time in Pakistan, a report claimed that about 1,000 women/girls are converted to Islam every year in the country.

Human Rights activist and advocate in Pakistan’s Supreme Court, M Shoaib Ashraf says: “There is no law to stop forced conversion in our country. But it is also true that Islam does not allow conversions for the sake of marriage. This is considered exploitation of the faith. One has to convert out of the love for the religion and not for any other reason.”

However, the Indian Constitution upholds that the right to marry is a component of the right to life which comes under Article 21.  It states: “No person shall be deprived of his life and personal liberty except according to the procedure established by law.”

Delivering a historic judgment in the Hadiya and Shefin Jahan case, Justice DY Chandrachud of the Supreme Court of India said: “The choice of a partner whether within or outside marriage lies within the exclusive domain of each individual. Intimacies of marriage lie within a core zone of privacy, which is inviolable. The absolute right of an individual to choose a life partner is not in the least affected by matters of faith. The Constitution guarantees to each individual the right to freely practise, profess and propagate religion. Choices of faith and belief as indeed choices in matters of marriage lie within an area where individual autonomy is supreme.

“They form the essence of personal liberty under the Constitution. Matters of belief and faith, including whether to believe, are at the core of constitutional liberty. The Constitution exists for believers as well as for agnostics…Matters of dress and of food, of ideas and ideologies, of love and partnership are within the central aspects of identity….Society has no role to play in determining our choice of partners.”

The courts in both the countries are working effectively to protect the rights of citizens when it comes to forced conversions. Recently, while hearing a case pertaining to a 14-year-old girl who had converted, the Lahore High Court gave a judgment that religion is a matter of heart and conviction and the court cannot adjudicate on such matters.

While delivering the verdict the court said: “What one believes in his or her heart is not a judicial matter.” These decisions hold good when an interfaith marriage carries the purity and virtue which the institution of marriage espouses. However, incidents of forced conversions are galore and sometimes they take a political hue.

On August 21, the Meerut police recovered the bodies of Priya and her daughter Kashish. They were allegedly killed by Shamshad. Priya, a divorcee, befriended Shamshad on a social networking site where he impersonated himself as Amit Gurjar — a Hindu. When Priya came to know about the truth she protested. In another case the Budaun police arrested Asif who posed as a Hindu man called Rajkumar and befriended Neha. A year later he allegedly killed her when she came to know of the truth.

But then, there are cases of true love where a person converts to another religion freely or wants to marry out of their own community/religion of their own free will.  For instance, take the case of  Muskan (Pinki) who married Rashid in Dehradun in July 2020. They duly informed the Superintendent of Police as required under the Uttarakhand Freedom of Religion Act, 2018. But both Rashid and Muskan were arrested under the new law when they paid a visit to Moradabad in UP. Muskan was pregnant at that time and later she alleged that she lost her baby because of police atrocity.

In the last two months, as many as 86 people have been named in 16 First Information Reports (FIRs) since the notification of the new Ordinance in the State. Out of these, 79 are Muslims, who have been slapped with charges of enticing a woman/girl and forcing her to convert to Islam. In one case 26 people, including five women, were booked in Etah for allegedly converting a 21-year-old woman by force. In Mau, 16 people have been named in an FIR whereas in Sitapur, 14 were booked in another such incident.

However, in Pakistan there is no law to stop forced conversions. “In the absence of legislation explicitly banning and criminalising forced conversion from minority religions to Islam, the affected families (mainly Hindus, Sikhs and Christians) have to use other laws, including those against kidnapping, forced marriage, child marriage and rape of minors to penalise the offender,” says Tahira Abdullah,  a social activist.

Ashraf says that in the absence of a law in Pakistan, if the victim claims she has converted on her own, there is little that can be done to prove her wrong.  “We cannot determine what is behind the consent.  If a girl from a poor family converts to marry a man from a rich background, there is no way to know whether she has converted out of love or if she has been lured. But this should also in a way be considered an unlawful thing as some form of coercion has always been used,” he says.

Jibran  Nasir, advocate and lead campaigner at Never Forget Pakistan and trustee Elaj Trust, says: “Young girls are kidnapped and converted and video messages are circulated in which the girl says that she is happy after being converted. We argue in court that girls do not necessarily scream or shout, for us to known that it is a forced conversion. Forced conversion is a crime whether one who is coerced openly admits it or not.”

The coerced conversion, especially of young Hindu and Christian girls in Sindh and Punjab province in Pakistan, continues unabated in absence of explicit laws criminalising it. According to  data provided by the Centre for Social Justice, Pakistan between 2013 and 2020 the highest number of cases of alleged forced conversions were in Punjab (52 per cent) followed by Sindh (44 per cent). “A clause on forced conversion, inserted into a draft law by Hindu legislators, was actually removed before enactment in Sindh province and it has repeatedly failed enactment in the national Parliament, despite clear directives from the Supreme Court of Pakistan),” says Abdullah.

Ashraf seconds her claims saying that the term forced conversion is very vague in Pakistan. “It denotes some form of force being used — whether verbal, physical or psychological like threats to family. When the same person is brought to court and they say they have converted of their own will, there is not much the court can do about it,” he says.

In Pakistan on the insistence of the family, the court can send the person to some safe place so as to give them some time and space to review their decision. The courts have no criteria to determine if force was used except if the person tells the judges that there was no coercion. Experts opine that the courts can only give decisions based on legal provisions and not beyond.

Despite the judiciary protecting the institution of marriage and privacy of a person, the issue of interfaith marriage has been used by political parties and organisations in both India and Pakistan  to further their personal interests. This situation emerges as a blot on a civilised society and should end as it often leads to violence and religious clashes.

(Banerjee is Executive Director, (News), The Pioneer, Lucknow, India while Lubna is Freelance Journalist and Human Right activist, based in Karachi. The views expressed are personal).