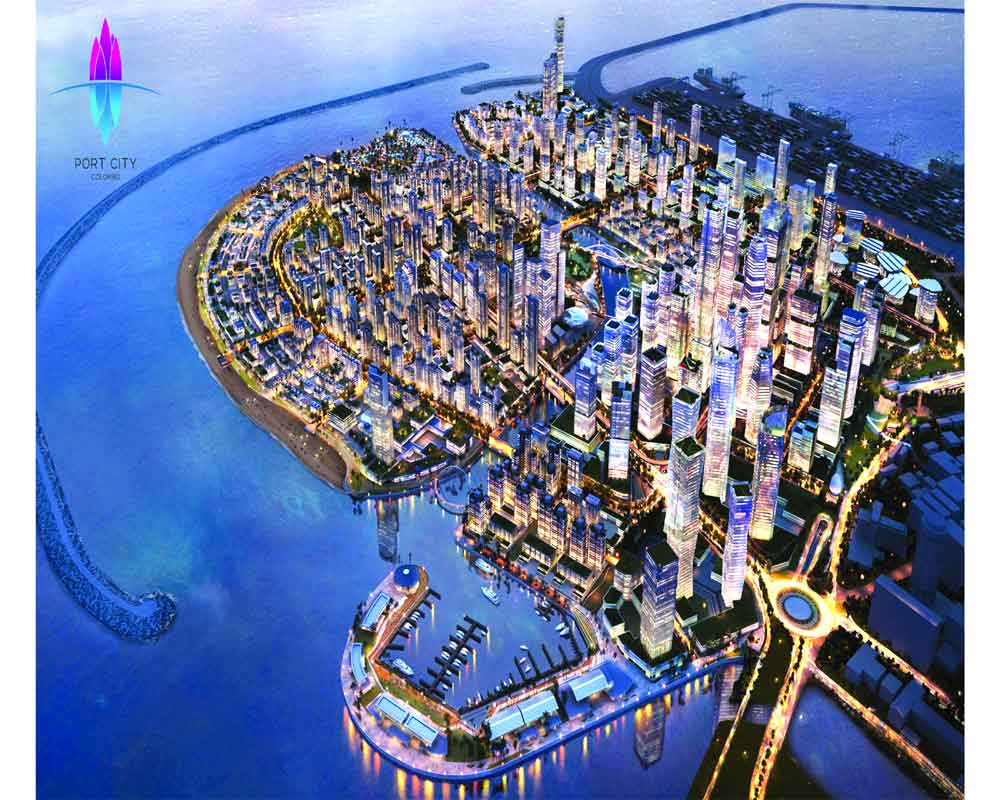 In 2014, on his visit to Sri Lanka, China's President Xi Jinping launched the Colombo Port City (CPC) Project worth $1.4 Billion, second biggest after the Hambantota Project. In February 2021, the cabinet ousted India and Japan from the tripartite agreement and a month later, Sri Lanka awarded a contract to China Harbour Engineering Company (CHEC) to construct the second phase of Colombo Port's East Container Terminal (ECT) for a lease of 99 years. The Rajapakse administration further approved the Colombo Port City Economic Commission Bill that established a Special Economic Zone (SEZ).

The most striking feature of the Bill is that it establishes a "Commission" whose geographical jurisdiction extends to the entire 'Area of Authority of the Colombo Port City', thereby giving China the 'right to decline' to any other third country, or to Sri Lanka itself,requests for establishing businesses. It also gave China a freehold over the 'Area' for 99 years as per Clause 67, which explicitly states that the "permit" cannot be cancelled before the stipulated time or till China wished for it. Thus, any other foreign presence on the port will require a Chinese nod, and even if Sri Lanka objects to any of the Chinese officials or the activities resulting from the agreement, there would be little that the island country would be able to do. Sri Lanka would not be able to oust China if it increases its hostile behaviour against its neighbouring states or Sri Lanka itself. It would not be wrong to say that it will genuinely establish a "Chinese Enclave", a terminology coined by the opposition political parties of Sri Lanka.

The importance of the Project is ascertained from the fact that Colombo ranks among the top 25 busiest container ports of the world and gives access to the Arabian sea and the Bay of Bengal. The approved Bill thus has international ramifications from a security aspect. Located in India's strategic backyard, CPC gives the PLA-Navy (PLAN) of China a tactical and strategic edge. The presence of China in Hambantota has already raised the threat perception for India and other countries like Australia. The distance between the two ports is approximately 250 nautical miles. The logistical limitation that PLAN had in the Indian Ocean Region (IOR) now seems to be done away. The debt trap policies of China aim to disturb the traditional balance of power in the IOR. The dual-use capabilities of the Hambantota port might be an intelligence and surveillance hotspot apart from providing the deep berthing rights to the Chinese submarines. Both the ports are close to Djibouti and create for Beijing a safety lane for PLAN in times of open hostilities. The dots of its 'ports' can be connected with the Chinese strategic intent of joining them with Chabahar, Gwadar and the Karachi ports, apart from the news of Uganda's airport takeover. China's peacekeeping force in Africa multiplies the magnitude of the problem as they can be immediately called upon to participate in case of conflict. In this way, China is an active threat to the critical choke points of world trade.

In the Eastern sector of the IOR, China has overcome its 'Malacca Dilemma' through its presence in Myanmar, and its naval presence in the Coco and the Greater Coco islands and Thailand's. The strategic experts well understand the use of canals for military purposes. China has militarised the IOR by disturbing the 'zone of peace', which India has focused on since 1947.  The Hambantota and the Colombo ports can serve as nodal points involving future Chinese military communication and intelligence network system.

Apart from the port acquisitions, China simultaneously internally balanced itself, which is evident through its Science of Military Strategy (2013) had spoken of local wars and then rapidly shifted to prioritising an enhancement of its capabilities for 'system warfare' (2015). The warfare encompasses overall strengthening of its reconnaissance, early-warning and command and control systems apart from the rapid development of medium and long-range precision strike capabilities through land, air and sea joint operations. Accordingly, what we see today is the culmination of its strategy in initiating battles in the enemy land (Galwan) and heightened vertical proliferation of its precision strike capabilities (hypersonic missiles and quantum increase of missiles). Nevertheless, China has also made critical technologies available to Pakistan (horizontal proliferation).

Apart from the doctrinal incorporations at a tactical level, to confuse its enemies,the ports of OBOR provide China with a camouflage wherein anything ranging from critical arms such as conventional missiles to its military personnel can be hidden to 'act' at a suitable time. The military build-up in these ports can be used for deception purposes to hide its 'intent and area of action'. The intelligence agencies need to keep a stern watch over what military facilities are placed in the Sri Lankan ports apart from the LAC. Indian ministries of foreign affairs and defence should not miss the rising sentiments against India and Japan in Sri Lanka. The ports of Karachi and Gwadar are feasible options for China, but the Sri Lankan ports will serve as the nodal points of its future military actions given their strategic position in the IOR. Further, the ports are a gateway to the European shipping lanes. A new war theatre near the southern coastal states of India thus seems to be rapidly building up.

However, most actions have a flip side too. The political resolve of AUKUS to restrict Chinese hegemonic designs against India and Australia exposes China to immense vulnerabilities. Whether the Chinese supply chains use the Malacca Straits or the Kyaukphyu port, they have to pass through the Southern IOR and cannot solely depend upon the CPEC which lends Beijing to the mercy of the Taliban in the vicinity. The military dependence on these ports, especially at Hambantota as a 'stocking point' of Chinese military assets, can cost Beijing significant disadvantages in a short "local war" or a few hours of tension build-up.

The democratic nations have already been vocal about ensuring a free passage of the IOR in other critical international waters such as the Taiwan Strait and the South China Sea. The joint naval drills only display the building resolve against the Chinese hegemony. Multilateral naval presences in batches of two to three nations at different locations on high seas in the Southern IOR and Taiwan Strait can counter the Chinese threat and militarily confuse Beijing. The options of various permutation combinations by the joint armed forces of AUKUS can implement economic and military blockages in case of a, first, collusive Sino-Pak threat to India, second, military actions to usurp Taiwan. It is possible that the 'game' that China has planned for others, especially India, fails miserably, and it might suffer multiple losses.

For this reason, Xi had stated that AUKUS aims to "stifle China in its Asian areas of influence". His statement was followed by Qi Zhenhong, the Chinese ambassador to Sri Lanka, reiterating that AUKUS would endanger Sri Lankan security. The previous week, the Chinese Envoy Wang Qun bitterly criticised the deal and stated it jeopardised the 'post-war international security order. Perhaps it becomes easy to understand who is at more risk — China or Sri Lanka.