Forest onslaught since Independence in India

Forest onslaught since Independence in India 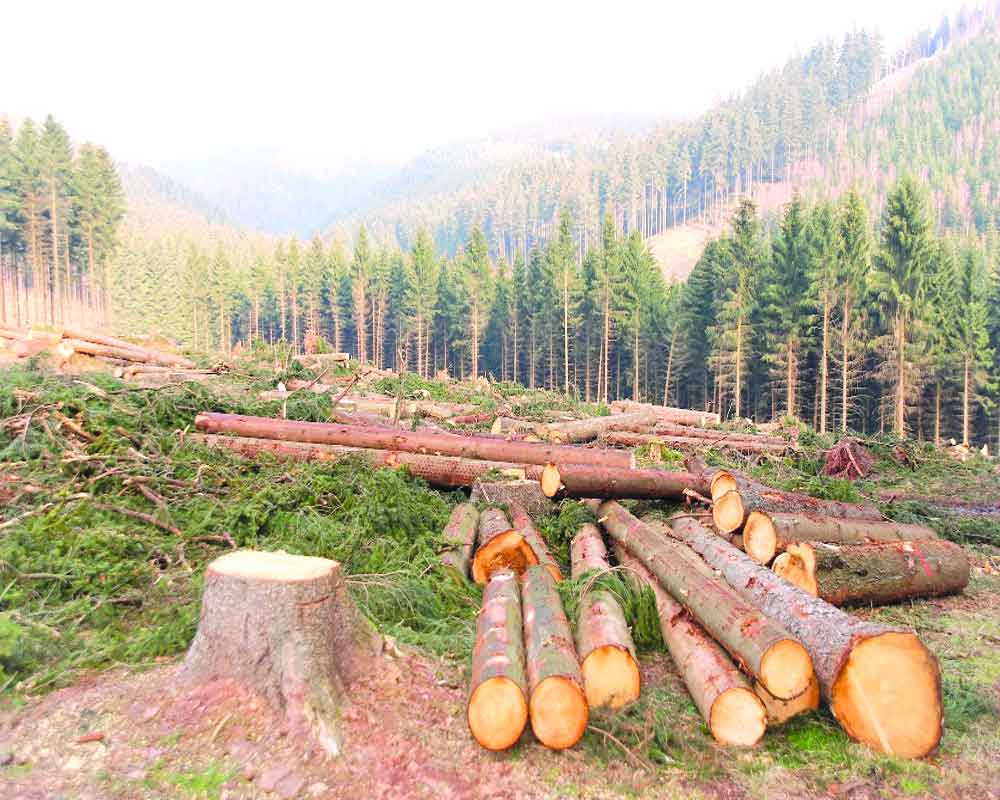 Forests prevent soil erosion and reduce the effects of climate change. However, in spite of our reliance on forests, we are still destroying them

Jawaharlal Nehru was a disciple of Gandhi but he believed that industrialisation was the key to progress. Hence, after independence, India followed the mainstream western model of development based on heavy industrialisation such as steel mills, atomic power plants, river valley projects and urea plants, etc. Therefore, in its anxiety to mobilize the resources, the Government issued a tacit direction to replace all miscellaneous forests with fast-growing species, such as eucalyptus and poplar (short rotation: 8-10years), despite the fact that these forests were a source of livelihood for the landless and poor peasants for their fuel, fodder and other household needs like poles, postand scaffolding. As a result, all the miscellaneous forests in the Himalayas’ foothills were replaced by fast-growing species with little or no undergrowth. Due to depletion of forests, fertility declined either by means of soil erosion or by failure to retain river sediment.

After independence, agricultural expansion became the major cause of depletion of the forest resources. A rise in intensive farming and commercial plantation (tea, coffee, sugarcane, etc.) led to the conversion of forest land into agriculture. Different development projects like river valley projects, urbanisation, mining activities were major contributors to deforestation and degradation of forest land. This is true even today.

Indian Forest Policy 1952 recognized the need to increase forest cover to one-third of the total land area. Professional lobbyists at the top shaped these policies without considering informed citizens’ inputs into account.

During the Green Revolution, millions of hectares of forests were ploughed or destroyed to make way for river valley irrigation/power projects. In addition to the devastating ecological impacts, deforestation has resulted in flooding and the loss of the fertile soil’s nutrient layer.

When the Government of India realized the deteriorating forestry situation, it constituted the National Commission on Agriculture (NCA) in 1976. In the interim report of the NCA, ‘Social Forestry’ was recognized as an important aspect of forestry for meeting rural needs.

There is often a lack of clarity as to what social forestry is. It was believed that any forestry intended to meet societal needs outside of a monetized economy was Social Forestry. What does social mean then? What is the purpose of planting? Is it to provide food for the community’s subsistence needs, to expand the planted area for market consumption, or to conserve the natural ecology of the forest?

Programs of social forestry were a mixture of successful and miserable failures. It has completely failed to meet the primary objective of providing fuelwood and fodder to rural households. Generally, only large farmers benefited from this program.Also, tribal members who are keen to protect and promote forests were left out of the process. There was no control over cattle browsing or grazing. Landless people have not been included in the afforestation process, which has worsened rural poverty and unemployment. Landless and small farmers thus began to enter the miscellaneous forest, resulting in another wave of deforestation and degradation.

Following the earth summit and the climate change negotiations, a series of new measures to afforest and reforest lands were conceived and implemented or are under implementation. As a result of the 42nd Constitutional Amendment and Forest Conservation Act 1980, a number of new measures such as urban forestry and strip plantations were introduced. This Act aims at reducing deforestation, conserving biodiversity, and protecting wildlife. Thus, India has seen a gradual increase in tree cover, but natural forests have continued to degrade.

In 1988, the National Forest Policy shifted from concentrating on commercial interests to encouraging the ecological role of forests and participatory management.

Recently efforts were made to regularize and empower forest dwellers by enacting the Forest Rights Act 2006. However, this Act has resulted in a spate of new encroachments into forest areas. According to the Ministry of Tribal Affairs of the Government of India, individual forest rights of habitation and cultivation have been recognized on 4.1 million acres of forest land. Following a Supreme Court order dated 13-2-2019, the Ministry has directed states to review all rejected cases.

Forest Survey of India Report 2017 concludes: The forest survey report shows the changes in forest cover across three density classes, scrub and non-forest areas. As the density of 12,183 sq km of MDF increased to VDF, 4,148 sq km of VDF was converted to MDF/OF/Scrub/NF respectively, indicating degradation/deforestation in these areas.

Additionally, 17,520 sq km of MDF was converted to OF, Scrub, and NF, resulting in a decrease in density.There has been improvement in 24,175 sq km of NF and 6,360 sq km of Scrub, indicating improved conservation and planting measures.

The density of VDF has, therefore, increased in areas of dense and very dense forests totalling 4,148 sq km of MAF. Nevertheless, the fact remains that deforestation is still occurring unabated in some areas. In contrast to forest products, forest influences are not transferrable from one region to another. The need for forests is universal, regardless of topography, climate, or edaphic factors.

Forest Survey of India’s Status of Forests Report 2019 does not include data on VDF, MDF, OF, Scrub, and Non-Forest due to limited satellite imagery scale; this poses a potential threat to the rewilding of forest lands. It is also going to increase the threat and effects of man-animal conflict, cause further deforestation, harm biological diversity and gene pool, and negatively affect ecosystem services alongside becoming formidable barriers to the movement of fauna, spores, pollen, insects, pollinating agents, etc.

Forests are integral to sustainable agriculture systems, especially under marginal conditions, and play many roles in protecting the land from eroding losses, providing food, fodder, and building materials, and improving genetic diversity. This is why the key person is not usually a forester, but someone who is close to the community and can act as a catalyst between the community and the professionals.

Forest Department has been entrusted with the responsibility of protecting and conserving forests, but professional foresters have struggled to persuade the political masters to support their long-term and short-term conservation plans. The Supreme Court has, from time to time, intervened and given direction to the State with regard to forest conservation and management under the Constitution of India.

Dorothy Stang asserts that “The death of the forest is the end of our life”. Forests are one of the world’s most important ecosystems. Along with providing habitat for animals and jobs for humans, forests prevent soil erosion and reduce the effects of climate change. In spite of our reliance on forests, we are still destroying them. There is often a disagreement between foresters and environmentalists on the importance associated with the different roles of forests. The sustainability of land can only be ensured by participatory management, which requires government commitment. Therefore, in one sense, India today stands as a crucible test case for forestry’s ability to make trees serve people- people means people of all the constituencies.

(The writer is a former Principal Chief Conservator of Forests, UP. The views expressed are personal.)