Hindus may soon vanish from B’desh

Hindus may soon vanish from B’desh 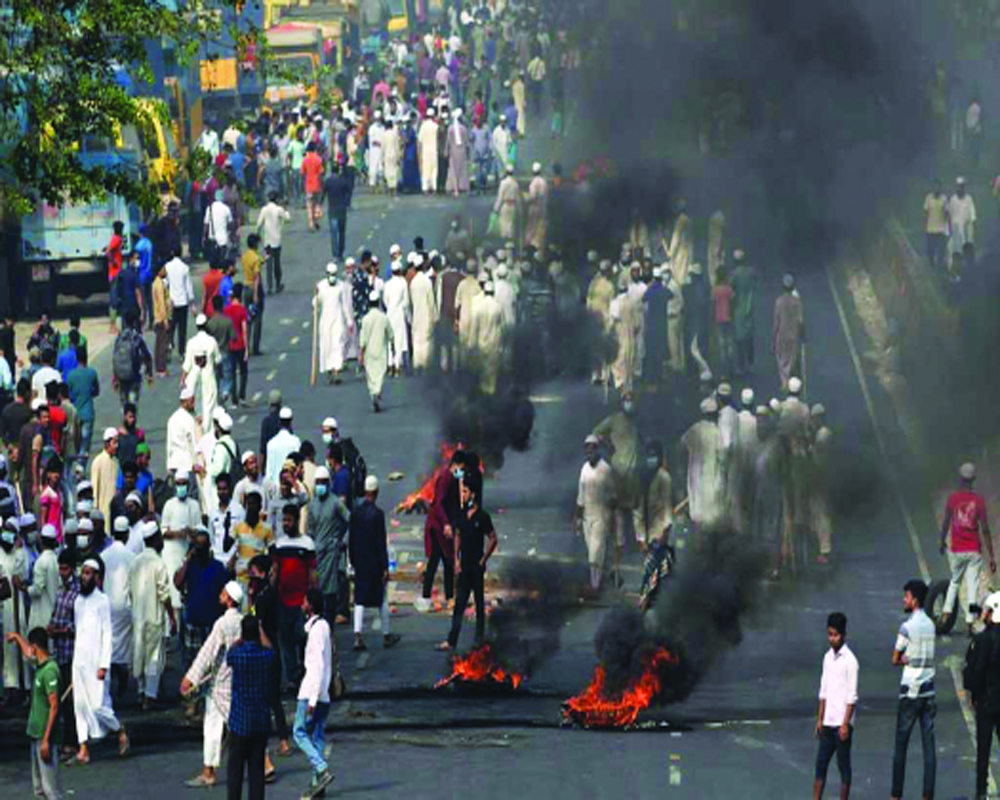 For the first time, Hindus have shown resilience, overcome their intrinsic passivity and become vocal about their rights as citizens of Bangladesh

The recent spate of violence targeting the Hindus of Bangladesh is a grim reminder of the sad plight of Hindu minorities in that country. Classified as belonging to a secondary religion as per the Constitution, the Hindus are easy prey for radical fundamentalists who continue to harass them with impunity.

The current round of atrocities erupted on Oct 13, in Comilla, following a fake social media post that claimed that Hindus had insulted Islam; eventually it was found to be the handiwork of a 35-year-old Muslim named Iqbal Hossain. Nevertheless, without any confirmation, Muslim mob went on rampage in different parts of the country, killing and injuring Hindus, damaging Hindu property and desecrating Hindu temples and Durga Puja pandals.

In Noakhali, a 500-strong mob vandalised the ISKCON temple and killed one devotee. And in a village in Rangapur district, 66 Hindu homes were damaged and 20 residences were burnt down. Anti-Hindu violence is not a new phenomenon in Bangladesh and occurs at regular intervals. In fact, Noakhali was the scene of the horrific massacre of over 5,000 Hindus during Partition.

This increasingly vicious climate in Bangladesh (labeled as “Jihadistan” by the exiled Bangladeshi writer Taslima Nasreen), has resulted in an unrelenting exodus of Hindus from Bangladesh. In 1940, Hindus constituted 28 per cent of the population. Today, they barely make up 8.5 per cent, accounting for 12.73 million out of a total population of 149.7 million as per the 2011 Bangladesh census. The formation of Bangladesh in 1971 did not slow down this outward migration. More recent reports are still more depressing; the Hindu population was tagged at 7 per cent in 2016.

Abul Barakat, a Dhaka University Professor, in his book Political economy of reforming agriculture-land-water bodies in Bangladesh, states that around 11.3 million Hindus fled Bangladesh from 1964 to 2013 due to religious discrimination. In other words, on an average, 632 Hindus leave the country each day with an annual exodus rate of 230,612.

The Government appears to have acted (whether promptly or not is open to question) to stem the current violence. Security personnel have moved into the affected areas and Border Guard Bangladesh troopers have been posted in 22 districts. The Government has filed 71 FIRs and rounded up 450 suspects. Additionally, PM Sheikh Hasina has reached out to the Hindu community and assured them that justice will be done.

Despite these promises, the Hindu community remains skeptical and concerned as past experience suggests that follow-up action has been tardy. Moreover, there are indications that some members of the ruling Awami League have been complicit in the attacks on Hindus.

However, there is a silver lining in this ghastly scenario. For the first time, Hindus have demonstrated resilience, overcome their intrinsic passivity, become vocal about their rights as citizens of Bangladesh and clearly expressed their rage.

Rana Dasgupta, General Secretary of the Bangladesh Hindu Buddhist Christian Unity Council, launched a scathing attack on the Government, bluntly reminding all Bangladeshis of the sacrifices made by the Community in the war of liberation. He averred: “But I want to say it clearly, we did not fight the war of liberation to survive as a minority. Our first and most important identity is that we are citizens of Bangladesh. Then there is the identity of our religion. We fought the war of liberation as freedom fighters. The religious and ethnic minorities of Bangladesh no longer have faith in any political leadership and assurance.” Keeping up the pressure on the Government, the Hindus also organised a mass hunger strike and mass sit-in protest on October 23.

But the Hindus need to take more concrete and sustainable measures to safeguard their interests. The Hindus of Bangladesh must explore the possibility of forming a Hindu Party to take leverage of their numbers, which is by no means insignificant. Of the 8 administrative Divisions, Hindus constitute more than 10 per cent of the population in at least 3- Sylhet (14.5), Rangpur (13.21) and Khulna (12.94) and account for more than 20 per cent of the total populations in districts like Gopalganj, Khulna, Maulvi bazar and Thakurgaon. In 60 of the 300 Parliamentary seats, the Hindu votes can be crucial to the outcome. With some negotiation, the Hindus can exert considerable influence in national governance to their advantage

It is also important that in the long run, the Hindus of Bangladesh write their own destiny without looking to India; India’s fluctuating political climate may not be welcoming to Hindus seeking refuge in India in the future. The anti-CAA protests were clear evidence of this. And in some parts of West Bengal, where most of the Bangladeshi Hindus are likely to gravitate to, the environment has become decidedly anti-Hindu with a significant number of Hindus being killed in the aftermath of Mamta Banerjees electoral victory. While Sheikh Hasina must be commended for trying to calm the situation, she needs to do more to inspire confidence in the Hindu Community. On their part, the Hindus must continue to organise themselves better electorally and take whatever measures necessary to protect their lives and safeguard their property to prevent their total decimation.

If not, Prof Abul Barakat’s clairvoyance may prove true that, “there will be no Hindus left in Bangladesh in 3 decades.”

(The author is a US-based academic and political commentator and writes on current affairs in India. The views expressed are personal.)