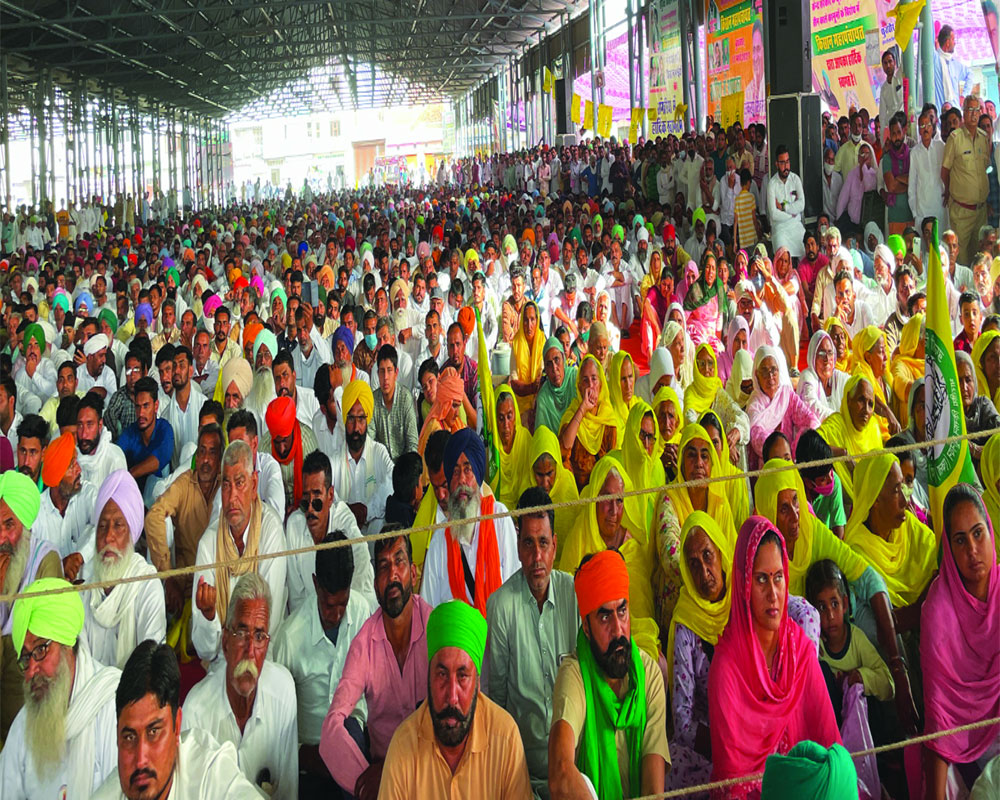 Until the farmers’ movement succeeds in making their voice heard in Parliament, the political parties will keep manipulating them

While the farmer leaders are busy campaigning against the three farm laws, building a pan-India farmers’ movement, something in Delhi has changed. The Opposition parties like the Trinamool, the Congress, the AAP and others have been vehemently opposing the laws; nevertheless, the Parliamentary Standing Committee on Food, chaired by TMC leader Sudip Bandyopadhyay with members from other political parties, has recommended the implementation of “the Essential Commodities (Amendment) Act, 2020, in letter and spirit, and without let or hindrances so that the farmers and other stakeholders of the farming sector in this country receive the benefits intended under the said Act”. This news comes as a shocker as the TMC and the BJP are locked in a battle for Bengal, yet the TMC-led committee echoes Prime Minister Narendra Modi’s corporatisation agenda.

The BJP has also exposed through the months that the Congress and other parties, including the NCP, have also recommended corporatisation one way or another in the past. The corporatisation of the agrarian sector has been the aim, it seems, of all the Governments. The Modi Government has just expedited it due to its large numbers in Parliament. The Essential Commodities (Amendment) Act is the most dangerous step for rural India, without which Big Ag firms such as Cargill, Walmart and Bayer can never take control of India’s food system. Hence, the Modi Government didn’t want to make any amendments to it during the 11 rounds of talks with the farmer leaders.

Now, the Congress and the TMC have both tried to distance themselves from the report and have called it a “disinformation campaign”, blaming the bureaucracy of the “department”. Further, different members have stated that they weren’t present in the meeting. Derek O’Brien even alleged that the chairman was not present when the report was passed. If these allegations are true, Indian democracy will see its abyss. Imagine if one committee could be subverted in this manner, what about the rest of them? There will be a crisis of faith in the Government or perhaps the beginning of a oligarchical mafia State. But if it was actually passed with consensus, India’s farmers and democracy will have to be ready for a new challenge — a corporate hydra controlling the Indian Government.

As for the politicians, birds of a feather flock together. Politicians and parties strive for their own interest and that of their donors, not of the farmers. And in the realpolitik, post-Kissinger world, there are only a handful who harbour good intentions for farmers, the rest — whether in the US or Brazil — serve corporate interests.

The Indian farmers also need introspection. Why in over 70 years of Independence, with over 70 per cent population engaged in agriculture, are there almost no national farmer leaders or any party started and run by growers? At best, the farmers have had temporal coalitions on issues, which retreat to the fields once the crisis is over. As a result, national and regional parties do only lip service to agriculture and growers, and the farmers have little choice but to vote for them. Most voters, urban or rural, are allured by caste, emotions and hate but fail to be stirred by hunger or economic prosperity.

The Modi Government, along with the corporate media, has done its bit to dissuade the farmers from creating a political front. Rakesh Tikait, along with other farmer leaders, has been extra cautious in distancing the movement from any political party. But how long can it remain apolitical? After all, man by nature is a political animal, as Aristotle rightly observed.

In my recent travels covering farmer rallies, a youth in Haryana’s Chautala village asked Rakesh Tikait: “Where do we go from here? Why don’t we create a new political front? Without farmers in Parliament, how will we get farmer-friendly policies?” Tikait deflected the question, stressing on the apolitical nature of the movement. But it was an important question. Why can’t the farmers organise?

The US corporations seized control of rural America because the farmers failed to stand united and to pressure the elected representatives. Only a handful of them got to enter the Senate or the Congress. Since the early history of the US, power brokers have divided farmers by class and race. By seeding hate and racial tensions, the US farmers were polarised. The result was devastation not just for the victims of the violence, but the bankruptcy of the survivors, too.

Plato in the Republic warned us that any revolution without a better alternative quickly descends into greater chaos. The Arab Spring of Egypt serves as a recent example. So wisdom demands that the Indian farmers’ revolution does also present a new form of green politics. The farmers have already laid the foundation for this paradigm shift. Their movement is attracting a new wave of Government workers who are directly affected by the privatisation, besides climate activists like Disha Ravi and Greta Thunberg. Now we need the movement to seed a new green political revolution by embracing politics for the rights of land, water and earth and not shying away from it.

(The author writes on agriculture and environment, and is the Director — Green India. The views expressed are personal.)