Myanmar should stick to non-violence to counter Tatmadaw

Myanmar should stick to non-violence to counter Tatmadaw 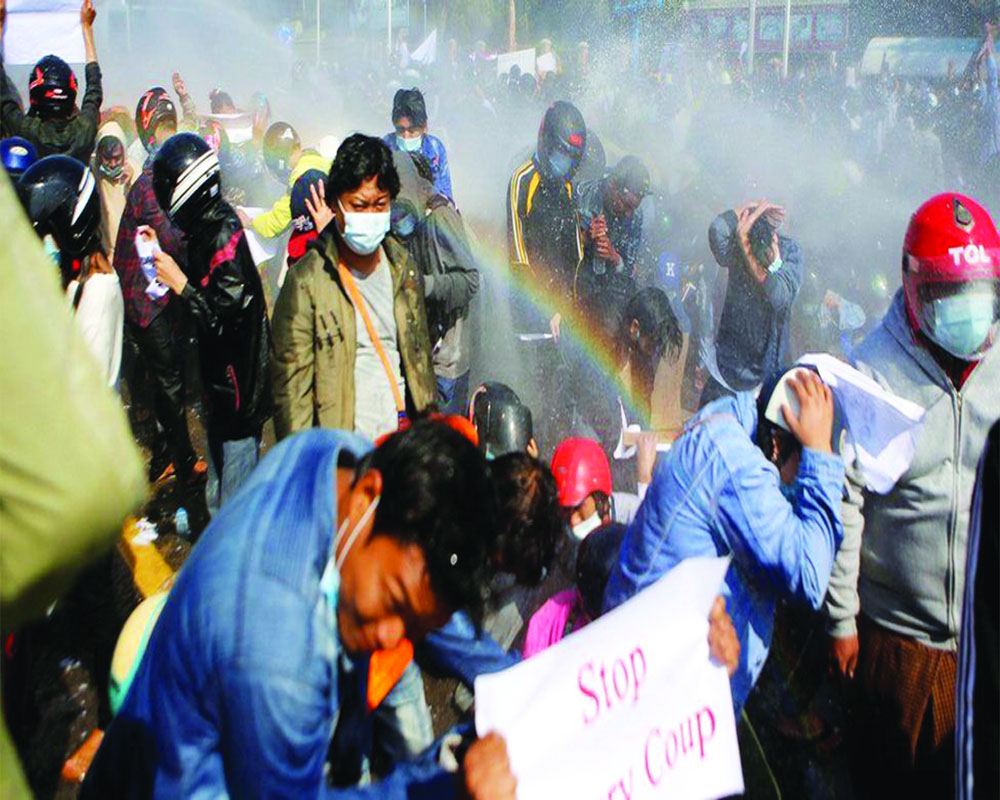 The non-violent democratic resistance in Myanmar is living through terrible times, but statistics are on its side: most non-violent movements eventually win. But it’s hard to stay non-violent when you are up against a force as ruthless and brutal as the Tatmadaw.

The Burmese army is distinguished by the fact that in its 73-year history, it has never fought foreigners. It is the second-biggest army in Southeast Asia with as many as 3,50,000 troops, but it has done all its killing at home. It has become quite good at it.

Since the military coup on February 1 put at least a temporary end to Myanmar's 10-year experiment with democracy, the Tatmadaw and its police accomplices have shot or beaten to death more than 400 unarmed protesters, and they show no sign of slowing down.

Senior General Min Aung Hlaing, who led the coup, clearly believes that he can ride out the resistance if he kills enough people. After all, in 1988 the army, already in power for 26 years, massacred thousands of university students in the streets of Yangon to quell a protest movement — and won a further 22 years in power.

But the country has now had 10 years of more or less democratic Government in a power-sharing arrangement between the Tatmadaw and the elected National League for Democracy (NLD), led by Nobel Peace Prize winner Aung San Suu Kyi. People have got used to their freedom, they are far better educated than they were in 1988, and they can organise themselves online.

Of course, the regime also knows how to use the internet. As Dr Erica Chenoweth, the world’s leading scholar on non-violent revolution, pointed out: “There’s a reason why the Government didn’t just literally cut off internet access forever. After a particularly gruesome event, they turn it on so that people actually share about the gruesome event.”

“They want it to be maximally terrorising and demobilising to the population. Then as soon as there’s some fomenting of outrage and attempts to coordinate resistance, they shut it off again. It’s a very savvy way of politically manipulating the information environment and suppressing any meaningful coordination advantages that the internet can provide to the movement.”

It was the NLD’s landslide election victory late last year that drove Gen Hlaing to seize power in February, but things are not working out as he expected.

The non-violent resistance in Myanmar is not just individual protesters in the streets. The members of the newly elected Parliament who avoided arrest have created a rival underground Government called the Committee for Representing Pyidaungsu Hluttaw (the Parliament)— and the CRPH is saying that it is a “federal” Government.

Federalism is the ultimate political heresy in Myanmar. The army’s self-assigned task ever since independence has been maintaining the hegemony of the ethnic Bamar majority (about two-thirds of the country’s 54 million people) over the Karen, Shan, Mon, Chin, Kachin, Rakhine, Rohingya and Karenni minorities.

The army’s personnel are almost entirely Bamar, and the country’s border areas have been under semi-permanent military occupation for decades to hold down minorities who have turned in desperation to guerilla warfare.

Federalism is the only solution that could bring long-term peace and unity to Burma, but the Tatmadaw would die in a ditch to prevent it.

Finding the Myanmar army dead in a ditch would not distress many civilians these days, but a civil war is the last thing any country should wish for.

The problem is that Myanmar’s pro-democratic leaders are starting to talk about not only a “federal government” but also a “federal army” combining the ethnic guerilla armies with pro-democracy militants.

Many high-profile leaders of the NLD, trade unionists and other democratic leaders have taken refuge in the minority areas, so creating such a united force is not impossible. They are doubtless near to despair much of the time and a “federal army” must sound like a good idea to them. They should resist the temptation.

“Non-violent struggle” is rarely non-violent on both sides, but the oppressors find it hard to use unlimited force when the other side is using none at all, specially, when the whole world is watching. That is why non-violent movements succeed so often.

If the protesters turn into just another army (amateurish, poorly armed, ethnically divided), then all limitations on the use of force by the big, professional, well-equipped army are lifted and the bad guys win. Most revolutionaries elsewhere know that well by now, but Myanmar was isolated from the rest of the world for a long time.

They had better catch up quickly, or there will be a civil war—which they would probably lose.

Gwynne Dyer’s new book is ‘Growing Pains: The Future of Democracy and Work’. The  views expressed are personal.