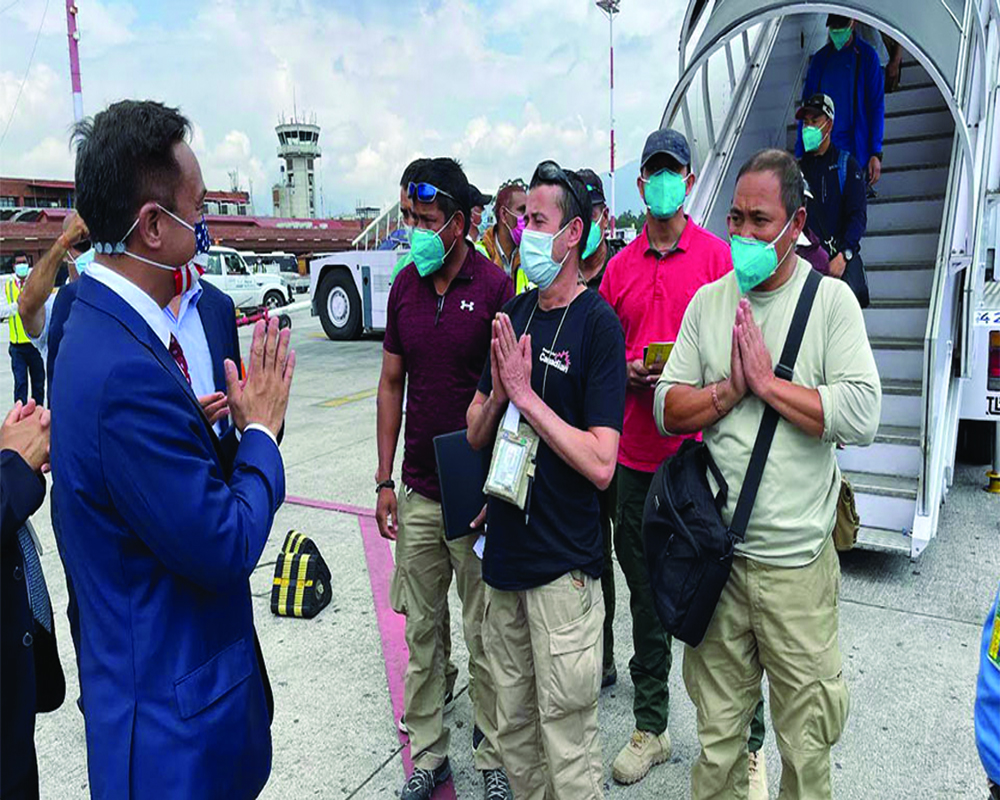 The world has been evacuating respective citizens from Afghanistan, but Nepal needs to do much more to bring succour to its nationals

Amid the Taliban’s takeover of power in Afghanistan, the leading global powers continue to repatriate their citizens from the strife-torn country. At the same time, geographically smaller countries are juxtaposed to international cooperation in repatriating their citizens. In South Asia, Nepal is one such country, trying to repatriate its 1,500 citizens from Afghanistan. On August 15, the country’s Home Minister Bal Krishna Khand convened an inter-ministerial meeting chaired by the Chief Secretary of the Government of Nepal under the chairmanship of the Heads of Central Asia, West Asia and Africa divisions of the Ministry of Finance, Ministry of Home Affairs, Ministry of Labour, Employment and Social Security, Ministry of Culture, Tourism and Civil Aviation, Ministry of Health and Population, Nepal Police, and COVID-19 Crisis Management Centre and the Department of Consular Services, to chalk out an action plan to repatriate the Nepalese citizens.

The Government of Nepal has created an online portal, WhatsApp group and emergency hotlines for its citizens to register their repatriation requests. Since Nepal does not have a diplomatic mission in Afghanistan, the Nepalese embassy in New Delhi is assigned with the Afghan desk. In this process, the Nepal Government has also sent formal requests to the United Nations, the United Kingdom, Canada, Germany, the European Union and Japan to immediately rescue and repatriate the Nepalis working in Kabul.

Notably, more than 100 Nepalese nationals were working at the United States embassy in Kabul, and 200 more with the Canadian and German embassies. The first batch of Nepalese repatriation took place on August 17 with the help of the United States Air Force.

As of August 29, a total of 778 Nepalese citizens have been rescued and taken to Kathmandu. India is also helping Nepalese workers to board its repatriation flights from Kabul. Meanwhile, the exact number of Nepalese stuck in Nepal is estimated to be between 15,000 and 20,000. However, only 1,500 are put on record because many Nepalese are engaged in the informal sector jobs and missing documentation with the Government of Nepal. The 2020 Nepal Migration Report estimates that the most significant number of labour migrants from Nepal to Afghanistan was deployed in security services.

In the last two decades, Nepal has become one of the largest exporters of human resources worldwide, with the majority working in India, Malaysia, the Gulf countries and the United States. Out of a total labour force of 7.5 million, an estimated three million labourers were working abroad in 2017-18, constituting 41.5 per cent of the total. Nepal’s economy has seen drastic changes due to increasing contributions made by the remittances into the GDP. In 2019-20 alone, Nepal received a record 961.05 billion Nepali Rupee (NR) as remittances, accounting for 22.5 per cent of Nepal’s current gross domestic product of Rs 4.26 trillion evaluated at the current market prices.

With extraordinary contributions made by the Nepali migrants to the country’s economy, missing capable repatriation strength and aviation, coordination with the host countries and missing legal and strategic understanding acutely risks the lives of millions of migrants. In the last 11 years, 7,467 Nepalese workers have died in the host countries, and in many cases, families of the deceased have failed to afford a coffin or bear transportation costs. Between 2008-2019, an estimated 21 migrants have died in Afghanistan due to terrorist attacks and other unknown reasons. There were 13 Nepalese killed in the terrorist attack on Canadian embassy in Kabul in 2016.

The earthquake of 2015, COVID-19, the Israel-Palestine Conflict and Afghanistan in the current scenario are such reminders, demanding improved capabilities and emergency response from the Nepalese Government. For instance, as soon as the other countries began to close down their borders due to the COVID-19 pandemic in 2019, there was a surge of requests from migrant labourers, students and others stuck on foreign soils to the Government of Nepal for repatriation. During the 2015 earthquake, Nepalese migrant workers had pleaded to their Government to arrange for their repatriation after they could not return from the Gulf countries due to confiscation of passports by their employers.

On all these emergency occasions, Nepal’s constant reliance on the international community for rescue, repatriation and emergency responses exhibits the lack of political will in developing its own capabilities. The rising export of human resources requires a systematic post-departure response and emergency assistance. Political appointments in foreign missions have become a trend in Nepal that creates a vacuum and weakens diplomatic capabilities due to a lack of dedicated training in the field. Therefore, Nepal needs to develop an ‘Emergency Response Team’ trained explicitly for such emergency missions evolving army personnel, diplomats and Government officials. Nepal also needs to understand that diplomatic capabilities define one’s external outlook in global affairs in the modern-day world. Nepal has time and again asserted its position in world politics, especially on international fora, but such weaknesses work against its aspirations.

(This concludes the two-part series on the Afghanistan developments’ impact on Nepal.)