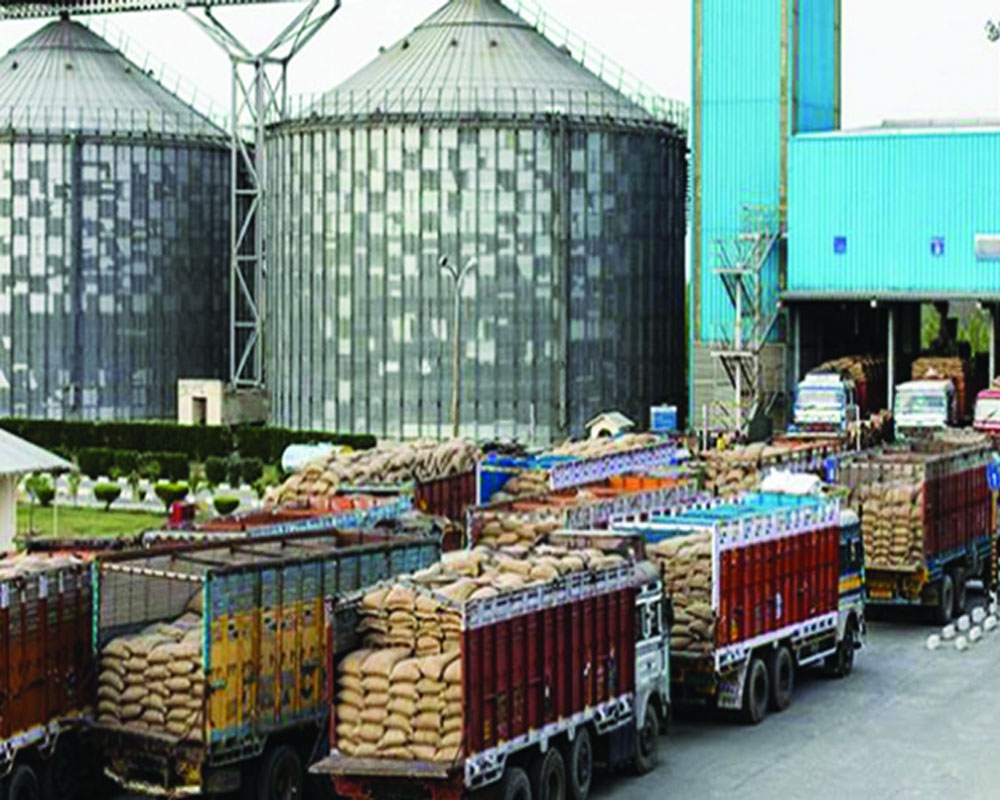 In the run up to the 12thWorld Trade Organization (WTO) Ministerial Conference scheduled to be held from November 29, 2021, India has made two submissions. One, subsidies given for maintaining food security programs of developing countries should be allowed without any limit andtwo, member countries who give trade distorting farm subsidies in excess of $10 billion should eliminate them within three years.

India runs a mammoth program of public stockholding for food security purposes. Under it, agencies of the Government like the Food Corporation of India (FCI) buy agri-produce such as wheat, rice/paddy, coarse cerealsfrom farmers at the minimum support price (MSP)and distribute at a heavily subsidized price of Rs 1/2/3 per kg through a network of fair price shops to meet the needs of India’s poor and vulnerable population.

The excess of MSP plus handling, storage and distribution cost over the realization from sale (read: Rs 1/2/3 per kg) is paid as subsidy from the Union Budget. In this scheme of things, WTO has nothing to do with the subsidy given to the consumer. However, it is very much concerned withthe price paid to farmers.

Being the guardian of ensuring ‘free’ and ‘fair’ international trade, the WTOputs theactions of a member country under scanner to see if the MSPfor any agri-commodity say, rice paid to its farmersis higher than its international price or, External Reference Price (ERP). If, yes this is viewed as giving an unfair advantage to them (read: farmers) in the global market. The state support which helps farmers in securing this advantage is termed as a trade distorting subsidy.

The rules as specified in the Agreement on Agriculture (AoA)  cap the trade distorting subsidy -also known in WTO parlance as aggregate measurement support - at 10 percent of the value of farm production for a developing country (for developed countries, the threshold is kept at five percent). The intent behind putting a cap is to prevent trade distortion.

This support includes “product-specific” subsidies and “non-product specific” like subsidies on agricultural inputs such as fertilizers, seed, irrigation and power. The “product-specific” subsidy is calculated as excess of the MSP over the ERP multiplied by the quantum of agri-produce. Whereas the MSP is taken for the relevant year, say, 2020-21, the ERP is the average of the global price prevailing during 1986-88 fixed in rupee terms.

If the subsidy given by a developing country exceeds 10 percent, it will be treated as violation of its WTO commitment.

MSP was less than ERP.Thereafter, even as MSP was higher than ERP, the excess remained well within the 10 percent threshold.This was the position until 2010. During the last decade however, the equation has changed. For instance, as per a May 2018 submission by the USA to the WTO, during 2013-14, Indian AMS on rice was 77 percent.

Meanwhile, the developed countries of the USA and EU have conveniently got away with giving subsidies at a level much higher than the five percent threshold applicable to them. This is because unlike India, which gives support to farmers by way of MSP (besides subsidizing agri-inputs), they give direct cash benefit transfers (DBT) to their farmers and it is impossible to establish that those dollar/euro cheques cause any distortion in global trade.

India- along with other developing countries represented in G-33 - has been taking up at WTO the need for what is termed as ‘permanent solution’ to address their food security concerns.

The 9th Ministerial Conference (MC) in Bali (2013) had agreed to a “peace clause” under which “if a developing country gives AMS in excess of 10 percent, no member will challenge this until 2017, when the WTO would look for a ‘permanent solution’. It came with several riders such as submission of data on food procurement, stockholding, distribution and subsidies. These also included establishing that subsidies are not “trade distorting.”

In the WTO General Council meeting on July 31, 2014, India insisted on a time-bound action plan to find a permanent solution, to be executed before the end of the 2014 co-terminus with the approval of the Trade Facilitation Agreement (TFA) - an area of great importance to developed countries. This was a good strategic move but it was abandoned midstream. In December 2014, even as the latter got away with the TFA, the former got “extension of the peace clause till a permanent solution was found.”

At present, the peace clause offers India a shield; but being subject to riders, it is not secure.The bigger worrying point is that the calculations - as per the formula set in the AoA - leads to AMS figure higher than 10 percent thereby making it inherently vulnerable. The focus should have been on untangling this knot, but this was put in the backyard even as Indian negotiators plunged into celebration mode over the December 2014 decision of the general council.

In the MC-10 in Nairobi (December, 2015), it was decided that “negotiations on the subject (read: permanent solution for PSH) shall be held in the Committee on Agriculture (CoA), which will be distinct from the ongoing agriculture negotiations under the Doha Development Round (DDR).Ironically, in the MC - 11 held in Buenos Aires (December 2017), the DDR itself was dumped.

Now, the Modi Governmentwants the upcoming MC-12in Geneva to take up ‘total exemption for support to public stockholding for food security’.The logic behind this demand is impeccable. The entire quantity of food procured from the farmers under this program is meant for poor and vulnerableconsumers; it is not available for export, hence there is absolutely no question of these supplies causing any distortion in global trade.

It is bewildering as to why our negotiating teamdidnot insist on this at the time the AoA was under discussion. Far from this, it even allowed flaws to creep in the formula for calculating AMS. First, the MSP for the relevant/current year is compared with the ERP that prevailed way back in 1986-88. Second, quantities not procured by Government agencies are also considered for arriving at the subsidy. Third, subsidy on agri-inputs to resource-poor farmers (they produce food for self-consumption and have no marketable surplus) is included.

No wonder, in the calculation done by the USA, for the year 2013-14 Indian AMS on rice was 77 percent. However, in a counter to the US claim submitted by the Indian Government, AMS for rice works out to only 5.45 percent. This is because the latter is free from all the three aforementioned flaws.

Despitelogic being on our side, India’s PSH program will remain susceptible to violating WTO commitments unless theAoA is altered to remove the anomalies.In 2014, Prime Minister Narendra Modi nearly grabbed a golden opportunity to set things right but it was missed. Will he succeed this time around? What if he doesnot?

The way forward is to replace the existing regime by DBT to farmers in precisely the same way as developed countries do.