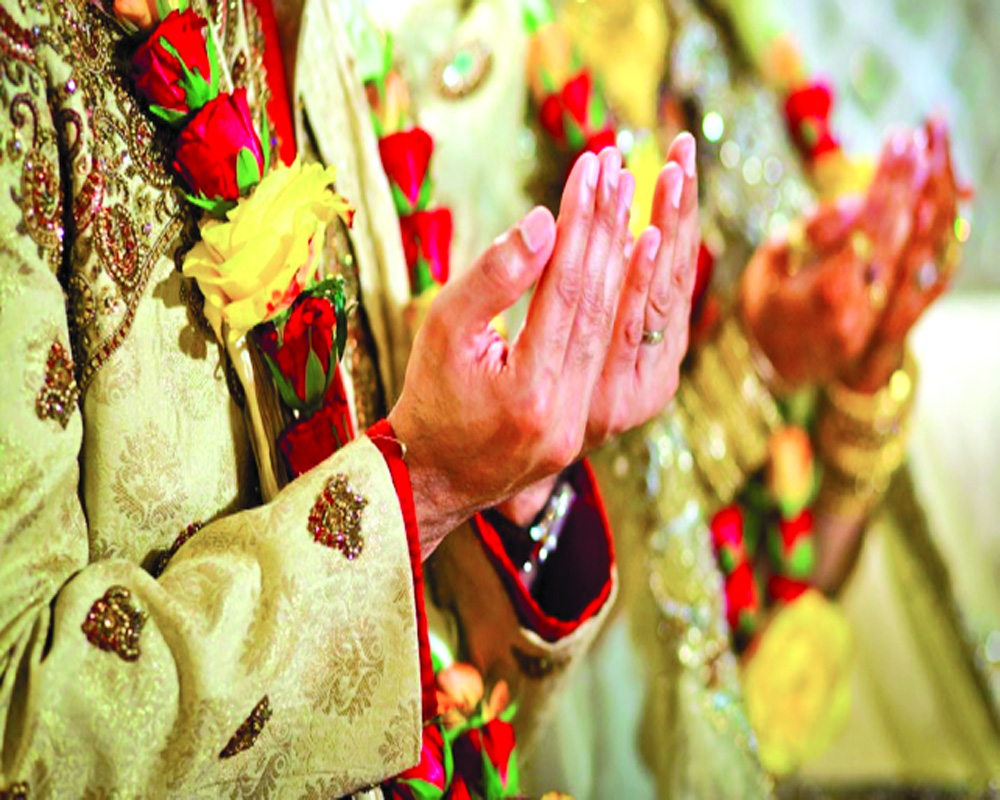 If a Muslim man and Hindu woman marry, it is recommended they do it under the Special Marriage Act, which doesn’t have unequal rights

At my niece’s wedding in a church, the officiating priest began by declaring: “Marriage is a union; divine and indivisible.” This is a succinct way of expressing that marriage is a sacrament; no breaking until death does the union part.

The Dictionary of Islam by Thomas Patrick Hughes (published by Rupa & Co) calls marriage a nikah, a word that in its literal sense means a conjunction. It is a contract till the husband wants it. He can divorce his wife at pleasure by giving a notice of three months. The wife does not have this privilege. If she wants to separate, she has to follow the procedure of khul, which entails finding a qazi and convincing him under the rules of fiqh or dogmatic theology of Muslims.

If a Muslim man and Hindu woman fall in love, it is recommended that they marry under the Special Marriage Act, which does not have unequal rights nor requires the woman to change her religion or name, whereas a nikah insists that both partners be of the same religion, i.e. Muslim. If the man does not wish to divorce, he can take another wife.

It is rare to find an interfaith marriage where the bride is a Muslim and the groom a Hindu. Perhaps the reason is that it is impermissible for a non-Muslim to marry a Muslim woman as he would have legal authority over her. The tenets of Islam say that God doesn’t allow non-Muslims to have authority over Muslims. A Muslim man can marry a non-Muslim woman, but not vice versa.

This seems unfair, but the Islamic rationale is that a non-Muslim man will not respect his Muslim wife’s faith. These tenets also hold that while Muslims believe in all previous religions and Prophets of God and respect them, a non-Muslim does not return the favour. A non-Muslim husband might not explicitly express this, but a Muslim wife cannot expect her husband to respect her faith. Muslims believe in only the revealed religions of the Book, not other religions. A Muslim woman marrying a non-Muslim would eschew respect of the wife’s religion.

Some time ago, celebrated IAS couple Tina Dabi and Athar Aamir Khan filed for divorce in Jaipur, two years after they had tied the nuptial knot. Their love story and marriage in 2018 had made national headlines. A video made by Tina, in which she alleged that her Muslim husband tortured her for wearing a burqa, converting to Islam, reading namaz and adopting ‘Khan’ in her name, went viral.

Even without divorce, a Muslim male can marry up to four wives at a time; with divorce, there is no limit on the number of wives he can have. Hinduism and Christianity insist on only one wife. For marrying a Muslim boy, girls must know the possibilities they face. If the boy is Muslim, his faith enjoins upon him to produce as many children as possible so that they achieve demographic preponderance. This is borne out by the Hadith (The Traditions, the second holy book after the Quran; The Dictionary of Islam by Hughes). Concerned Hindus understandably use the word ‘jihad’ in this context.

The rights of women under the Hindu Marriage Act or Special Marriage Act vary greatly from the rights of those who wed as per the Sharia. This has particular outcomes, as under Sharia, non-Muslim women have to first convert to Islam because this is a condition for marriage. Thus, any non-Muslim woman marrying a Muslim man instantly forfeits all her rights as she transits from a legal regime with more rights to one with fewer rights. This is not reversible, as Islam does not permit apostasy. Many women who convert for the sake of getting married, believing they can continue to practice their faith, are quickly belied of this notion; the faith they marry into doesn’t permit this either.

Moreover, Hindus hold marriage to be a sacrament where even divorce is considered an anathema (though allowed legally). Under Sharia, it is only as a contract where a man can divorce his wife orally and instantly by simply saying talaq thrice (till it was banned). This is the chasm between the two worlds.

Non-Muslim women must be made aware of these consequences. The blind eulogy and advocacy of interfaith marriages and pretending that all such alliances are of the same nature is dishonesty. Rosy and romanticised pictures of interfaith marriages carry the serious propensity of harming non-Muslim women, who might make hasty and misinformed decisions only to repent and suffer later.