The Internationale: Kumbh of protests

The Internationale: Kumbh of protests 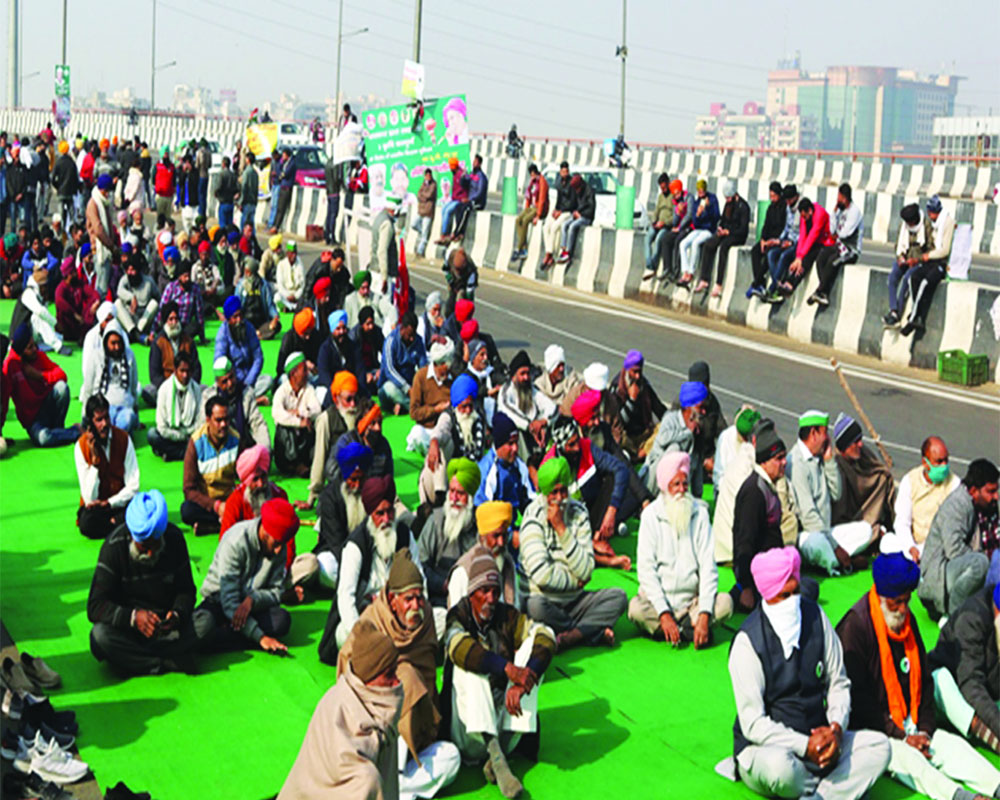 The agrarian issue is being politicised by media magicians but, for the farmers, it’s a question of livelihood and existence

Green mango flowers are now bursting and kites dance in the sky while bright yellow, purple flowers bloom one last time and farmers in Tihar Jail, New Delhi, welcome a silent spring. The warm air rustles the yellow plastic tents at the Ghazipur Border, flowing from AH2 to the Tikri Border, announcing a new season and the next phase of the Farmers’ Revolution begins.

It’s been over a month since farmer leader Rakesh Tikait’s tears galvanised the farmers from Uttar Pradesh (UP) to Rajasthan and much has happened over the spring — Basant Ritu — since then. Lakhs of devotees have cleansed themselves taking dips in the holy Ganga from Haridwar to Prayagraj, Prime Minister Narendra Modi may have shed expiatory tears as he reassured his followers that the three farm laws are good for farmers and for business. But the farmers of the world are not convinced.

Recently, major US-based farmer groups like Agrarian Trust, National Farmers Union and 87 other organisations have started an international movement expressing solidarity with the farmers’ revolution. Over 50 Canadian organisations have also extended support. They have been exerting pressure on their public representatives too to end this “injustice”. Their criticism comes from having suffered due to the market-led agricultural policies since the 1960s in the US. This is no longer an “international conspiracy” or “attack on India’s sovereignty” or “sedition” perpetrated by “international media celebrities like Rihanna or Greta” but a moment of true global solidarity beyond race and religion.

Foreclosures and debt have destroyed millions of US farm families. Suicides and despondency plague rural America while Big Ag grows. It’s not only the older generation but young farmer leaders like Severine Fleming who have supported the farmers’ revolution. All, save for the corporate media, see the invisible hand behind these reforms — Big Ag. Modi has led the Big Ag to India’s doors and sacrificed Indian farmers for agri-dollars.

India farmers are jubilant about the US support but, as the harvest season nears, some of them are now returning with the stories of their struggles and indignation to their villages to work the fields, while others farmers are on the road to Delhi’s borders. In Haryana, media reports indicate, hundreds of villages have pledged to send one person from each house to join the revolution. The farmers’ revolution is getting ready for the hot summer. Although the Modi Government’s version occupies the media discourse, the farmers may have outwitted the Government once again.

How? With the help of the returning farmers, their unions and leaders have now expanded their base far beyond Delhi’s borders. YouTube videos and independent vernacular citizen journalists have spread each update across the country. The tune of Farmer Revolution’s Haryanavi anthem — “Modi ji hum Dilli aage” — now sways young and old farmers from Bengal to Rajasthan.

From Ganganagar to Kerala, the farmer unions have addressed millions of people in a short span of 30 days. Now that the movement has reached a mature stage, it will spread even faster. Even the Government is finding it hard to call them “a handful of farmers” as it did in early January. Now the discourse has become “crowds don’t get the work done”. The movement today represents not just farmers but all those who work the land — migrant workers, labourers, urban mandi workers and the traders. This is a united rural India resisting a corporate auction. Meanwhile, the Government has unleashed the biggest round of privatisation of public assets since Yeltsin’s Russia.

No one knows why fuel prices have skyrocketed. Why taxes and cess keep increasing, squeezing the middle class, and yet arterial roads of Delhi have potholes? The fuel prices directly impact farmers’ input costs and offset the MSP calculations. India is being rigged for food inflation. Indian agri produce vastly outperforms against the highly subsidised imports from countries like the US.

The agricultural bubble is soon going to burst; the collateral will be rural India and millions of lives. History will repeat itself as from its ashes shall emerge a new class of neo-zamindars that shall profit from each morsel. The US is a fine example of this, where four corporations control over 80 per cent of the food and about 50 per cent of all produce is wasted!

The Modi Government needs to correct course by abandoning the laws and making a fresh start with farmers, for their movement is no longer an Indian affair or internal matter as the External Affairs Ministry is already involved in this diplomatic issue.

We as a nation should remember that India loses face in the world only because democracy dies at home. This is an agrarian issue that is being politicised by media magicians, swaying public opinion inciting more hate in society. But for the farmers, at home and abroad, it’s a question of livelihood and existence. We need to stand in solidarity because it’s a fight for the survival of our soul and roti, together.

(The author writes on agriculture and environment, and is a former Director — Policy and Outreach, National Seed Association of India. The views expressed are personal.)