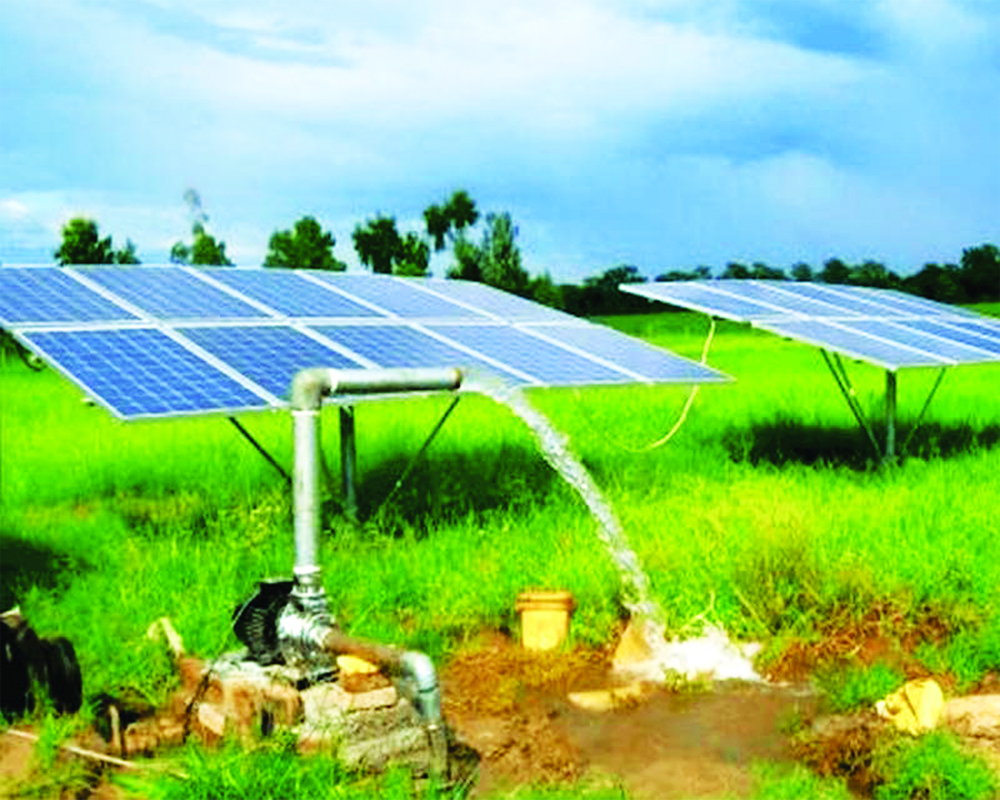 Designed in 1981, Agrovoltaics is a promising tool that helps a land patch to be used for both farming and power production using solar panels

Agrovoltaics (or Agrophotovoltaic), despite its recent resurgence, is not a new concept. Designed in 1981, Agrovoltaics is a sustainable technique where the same patch of land is used for both farming as well as production of electricity from solar panels. Conventionally, we believe that land can only be used for a single purpose; for instance, farmers would, ordinarily, have to choose between energy generation or farming but agrovoltaics maximizes land efficiency by co-developing solar and agriculture together on the same piece of land.

For a country like India, where agricultural products and practices dominate a major chunk of the national economy, innovative synergic models like agrovoltaics can be practiced to increase agricultural land productivity. In addition, it will also cater to the nation’s target of making a big push for renewables through solar, expecting to increase its renewable energy capacity from 380 GW to 450 GW by 2030, about 60 per cent of India’s total energy capacity.

How does Agrovoltaics work?

For one year, the pilot project used 720 bi-facial solar modules covering one-third of a hectare, mounted high enough that crops received almost the same amount of sunlight as under natural growing conditions. The system costs as much as a small solar roof system while crop production is sufficiently high and can be profitably sold on the market.

Agrovoltaics system increases the efficiency of energy production as solar panels are inherently sensitive to temperature, they warm up faster. But the crops cultivated underneath the photovoltaic (PV) panels emit water through their natural process of transpiration, reducing the panels’ temperature, thus, increasing their efficiency.

Early experiments in India found that agrovoltaics can potentially increase the overall value of grape farms more than 15 times as compared to conventional farming while maintaining the same grape production.

If this dual use of land is implemented nationwide, it can make a significant impact by generating over 16,000 GWh of electricity, which has the potential of meeting the energy demands of more than 15 million people.

Numerous small-scale experiments in agrovoltaics have mushroomed across the country, particularly in Gujarat and Uttar Pradesh, with some generating up to 3MW. These programs still require a full cost-benefit analysis and rigorous monitoring to understand the impact on crop growth, power generation — and the viability of feasibly scaling these programmes.

However, this also has a challenging side — As India pushes forward to achieve its renewable energy targets, the rights and concerns of small and marginalised farmers across India face a new threat.

Many cases of land acquisition and displacement are picking up pace in the country. According to recent reports from Assam, where the villagers from Amdanga village, who form a part of Mikir Bamuni Grant cluster of villages in Nagaon district, claim that a ‘Green Energy Plant’ is bulldozing the rights and claims of marginal farmers.

However, displacing vulnerable and marginal farmers with minimal compensation, in an already climate-vulnerable region, will only reduce the rural capacity to deal with climate challenges all the while offering no guarantee that solar power will contribute to their resilience in the face of global risk.

Assam ranks among the five least climate-resilient States in India’s Climate Vulnerability Assessment report, 2021, with rural poverty and marginal farming ranking among the top reasons for this vulnerability. A decarbonisation transition is needed, but only if it can equitably build climate resilience cross-sectionally from urban centers to rural, marginal farmers.

Year-wise national targets for scaling agrovoltaics in India must be defined, coupled with pilot projects to sensitise stakeholders.

The explicit mention of Agrivoltaics is necessary for any law, scheme, or policy when cultivable land is used with PV. An agrivoltaic system could be designated in the land use plan as a “special area for agrivoltaics”.

A prerequisite of a minimum of 80 per cent of the total surface to be available and used for agricultural purposes can be set in place to ensure that the farmer or landowner continues to receive the agricultural subsidy allocated to the area in which case statistically the area does not count as sealed. The improvement of livelihoods of the partnering farmers must be prioritised.

As a model, agrivoltaics reconciles the need to decarbonize India’s energy production systems, while minimizing land conflicts, especially with small and marginal farmers at greater risk of eviction for solar expansion.

It can also be a tool to create sustainable rural electrification in viable landscapes and build solar micro-entrepreneurship among rural communities.

This, in turn, would augment their agricultural incomes with renewable energy incomes which they can package and sell to the government or distribution firms. It is an opportunity to explore routes to rural development that protect farmer incomes while creating entrepreneurship opportunities, build renewables into electrification and benefit people across all levels.

(The author is the co-founder and Managing Member of the Balipara Foundation, an NGO. The views expressed are personal.)