The Rohingyas must go back from India

The Rohingyas must go back from India 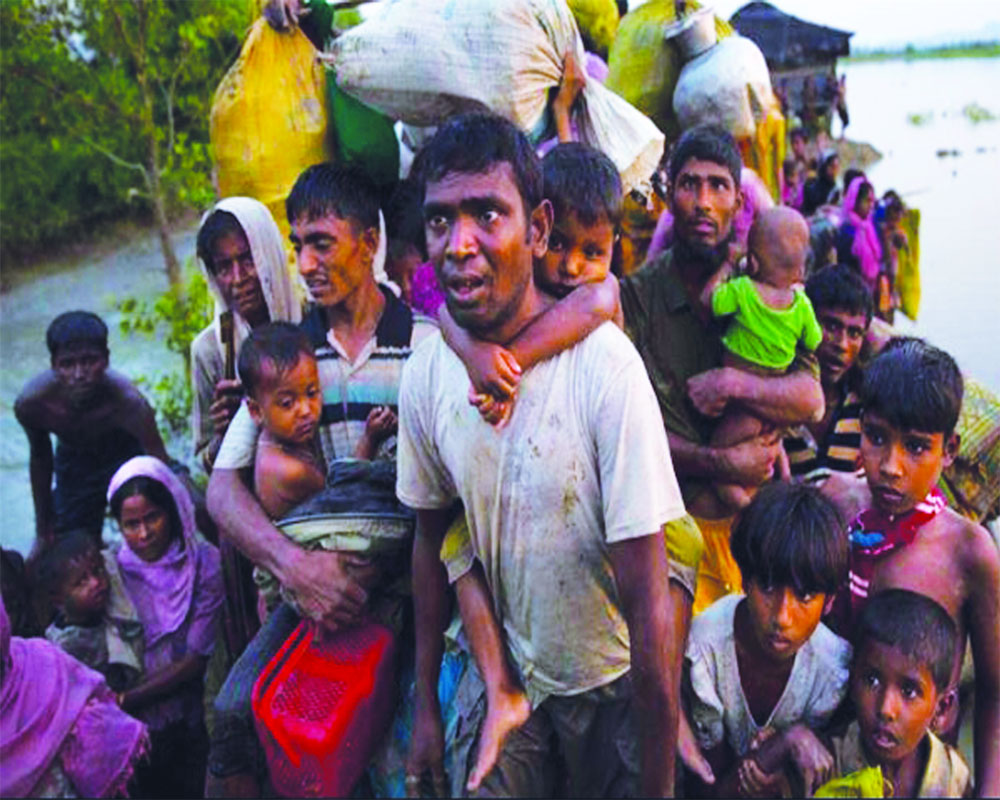 Interestingly, it is not only the Government of India or the people of Jammu who consider Rohingyas as a security threat. Myanmar and Bangladesh, too, consider them similarly

In a recent move, Jammu and Kashmir Police  started moving Rohingya refugees to holding centres prior to their deportation to Myanmar. It is believed to be a part of the larger all-India exercise which will finally culminate with their deportation to the country of their origin. Many of the refugees have been living in India since 2008, when they fled their home country following a brutal outbreak of violence at the hands of the Myanmar military.

In 2012 and then 2017, the numbers of Rohingya in India grew again after further campaigns of violence. Most ended up in camps in Cox’s Bazar in Bangladesh, but tens of thousands have also sought safety in India over the past decade, where they have set up established communities.

The mass detentions, which began in Jammu,  are part of a wider nationwide crackdown against Rohingyas, who number about 40,000 in India. Many hold registered United Nations High Commissioner for Refugees (UNHCR) refugee ID cards, which offer protection from arbitrary detention. They were also provided identity documents, ration cards and settled on the periphery of Jammu city surrounding the military garrison at Sunjuwan.

Surprisingly, in Jammu & Kashmir (J&K), they were not allowed to settle down in Kashmir despite religious affinity and the fact that they were also being supported financially by many Kashmiri philanthropic organisations who were working towards their rehabilitation in Jammu. Along, with successive Governments, even these organisations never thought of taking them to Kashmir where it would have been much easier to look after them logistically. The growing dissent in Jammu to these illegal settlers received no attention of the successive State Governments and their numbers continued to increase exponentially.

The growing dissent in Jammu to these illegal settlers received no attention from successive State Governments and their influx to the region grew and their population increased over the years. In the end, it was the Narendra Modi Government with began the process of putting an end to the inflow of Rohingyas into the country. It took a firm view on their deportation and its efforts in this direction included talks between Prime Minister Modi and Aung San Suu Kyi, the de facto ruler of Myanmar. (She has now been replaced by the military regime).

Interestingly, it is not only the Government of India or the people of Jammu who consider Rohingyas as a security threat. Myanmar and Bangladesh, too, consider them similarly. Many other Muslim nations like Indonesia and Malaysia who have resisted the entry of Rohingyas into their country also do so because of security concerns despite sharing religious affinity.

In June 2017, Bangladesh Foreign Minister Abul Hassan Mahmood Ali told the national Parliament that Rohingyas could pose a major  threat to the safety and security of the country. “Among the Cox’s Bazar population, 20-25 per cent people are now Rakhine Muslims. Such huge Rakhine Muslims may become a threat for national security in the future,” he said.

Only recently his junior Minister Shariar Alam echoed the same sentiments when he said that the Rohingya crisis is both a humanitarian and security issue. He further said that the possibility of links between the Arakan Rohingya Salvation Army (ARSA) and foreign terror groups cannot be ruled out. India also shared a similar view point.

New Delhi had sent relief material to the refugee camps in Bangladesh housing Rohingya refugees as humanitarian aid. But humanitarianism and national security cannot be viewed from the same prism, particularly when India is a victim of global jihadi terror.

As soon as the police began to round up the illegal immigrants in Jammu recently, the pro-Rohingya lobby became active as they have a solid support base in Kashmir among the separatists. In the past, whenever protests were held in Jammu to deport the Rohingyas, there used to be a severe backlash in Kashmir because the whole issue of national security was communalised by portraying it as a religious vendetta. The Hurriyat at one time had threatened of a Valley-wide agitation on the issue.

The Gupkar Alliance, too, has begun to criticise the Government’s move to deport the Rohingyas and said that India, being a signatory to the UN charter, must abide by it and work on humanitarian grounds. While his party spokesperson accused the then Atal Bihari Vajpayee-led NDA Government of settling the refugees in Jammu, Dr Farooq Abdullah also supported him indirectly by saying, “Nobody can settle here without the permission of the Government of India.”

Having failed in its ambitious plan of overhauling Jammu’s demography, the National Conference (NC) is now trying to create a new narrative. But everybody in Jammu is aware of the truth and the NC, the Peoples Democratic Party (PDP) or the Congress cannot wish away their involvement in facilitating the Rohingyas to settle here illegally and, in the process, facilitate the nefarious designs of Pakistan’s  Inter-Services Intelligence (ISI). Incidentally, India is not a signatory to the 1951 UN convention on refugees.

Where was the humanitarian conscience of Farooq Abdullah and his party that had turned a blind eye to the persecution and ethnic cleansing of the Hindu Kashmiri Pandit community from their ancestral land by blood-thirsty, slogan-shouting and gun-toting locals to convert Kashmir from a multi-ethnic, peace-loving, multi-religious society to a monolith? Till date except for lip service, they have made no sincere effort for the exiled people’s safe and honourable return to their homeland. Consequently, Kashmiri Pandits continue to lead the life of refugees in different parts of India and long to return to their homeland.

The clear aim of these political parties is to draw the necessary political mileage through polarisation for petty vote bank politics. But the Government of India is sincere and uncompromising on the issue of national security; hence it is not going to blink or get bogged down by such actions.

The police need to be complimented but it faces a long haul. The number of illegally settled Rohingyas is not in hundreds but thousands. Many of them are missing or possibly have mixed and settled with the local population through fraudulent means. The police have an arduous task ahead to identify, locate and deport them.

However, one thing is crystal clear, the Rohingyas have to go back to their country. This is non-negotiable.Their exit from Jammu is mandatory. The nation can ill-afford to let the design of the ISI succeed in the strategically vital Jammu.

The author is a Jammu-based political commentator, columnist, security and strategic analyst.The views expressed are personal.