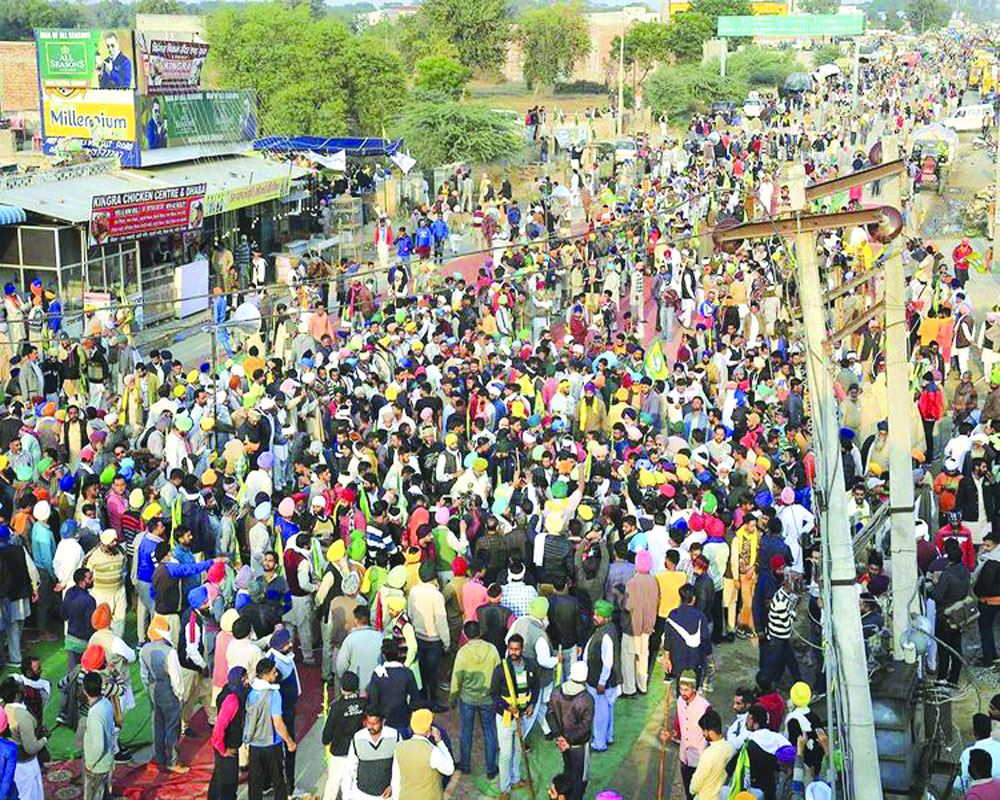 The SC-appointed panel to talk to farmers comprises a neo-con economist, a seed terrorist and a policy sahib, which has given rise to mistrust

As 2021 began, the Supreme Court (SC) appears to have got a taste for drama as it pitched a “biased committee” against the revolutionary, but peaceful, farmers camping on Delhi’s borders. Why biased? Because all the four original members had unequivocally supported the farm “reforms”. But the apex court believes that they will remain neutral; and Chief Justice of India SA Bobde orally observing that if a person on a panel has expressed views on the matter, it should not become ground for his disqualification from a committee and that “committee members are not judges; they can change their views”. Meanwhile, Bhupinder Singh Mann rejected the SC’s offer to be part of the committee and said he stands with Punjab. The three remaining members, who pledge to be “non-partisan”, have only added to the mistrust of farmers because the media may see them as honourable but, to farmers, they are simply a neo-con economist, a known seed terrorist and a policy sahib.

Let us go back to the start of this mess. After repeated failure of talks between the NDA Government and the farmers, petitions were filed in the SC which gave them a patient ear and even admonished the Centre for its “handling of the issue”. There was some jubilation when farmers were teased by names such as “P Sainath” to be included in the committee. But the celebration was short-lived; it was as if the SC was testing the waters before delivering the masterstroke: Four pro-Big Ag names were invited to the committee. They being men of the law, we can’t expect the judges to understand much about agriculture but whosoever advised them, has put the integrity of India’s top court in a quagmire. Mann’s polite refusal provides grist for this fact. Recently, committee member Anil Ghanwat has expressed fears that the farmers may not even participate in the proceedings.

How unbiased are the three remaining members — Ashok Gulati, Anil Ghanwat and Pramod Kumar Joshi? With a demonstrated history of promoting and advocating for Big Ag and US-style liberalisation, the apple doesn’t fall far from the tree. Ashok Gulati, our neo-con economist, despite having worked in the Government for decades, is notorious as the poster child for Big Ag in India. His policy recommendations are hailed by the industry and vehemently opposed by farmers, whether on GM crops or farm-gate liberalisation. His economic models, to many farmers, are allied to the US industry interests and not to the welfare of Indian farmers and consumers. Gulati’s models are a disservice to Gandhi’s bread labour. Some would go so far as to say that his economic schizophrenia is so advanced for what he called the “1991 moment” for Indian agriculture, has turned out to be the biggest farmers’ revolution in the history of our world.

Next we move to ‘policy sahib’ — Pramod K Joshi, who is the director for South Asia, International Food Policy Research Institute. Without going too much into details about his personal views, the organisation he represents is heavily funded by the Big Ag corporations and allies. The Syngenta Foundation (Switzerland), The Rockefeller Foundation (United States), CropLife International (Belgium), Bill & Melinda Gates Foundation (United States), Cornell University (United States), the US Department of Agriculture (United States), KPMG East Africa and Alliance for a Green Revolution in Africa (AGRA) are some of the biggies to generously donate to his kitty and push a global agenda through this organisation in countries like India. Farmers are curious as to why did the SC’s advisors think of this international body? Does India have a dearth of swadeshi agriculturists or agrarian policy experts? Why the swerve from Aatmanirbhar Bharat on policy matters? This name in the committee exposes the invisible hand behind the farm “reforms”.

Finally, we move to alleged ‘seed terrorist’ Anil Ghanwat, who is the president of Shetkari Sangathana (SS). It didn’t take illegal seeds from China to reach the US or India in May 2020 for any member of the cotton seed industry to understand the term “seed terrorism”. India has been an area of operation for many such illegal seed schemes which want to destroy India’s native seeds, public health and seed industry by using criminal means. ‘Seed terrorists’ smuggle and peddle unapproved foreign seeds on India’s soils and fields. They claim that it’s good for the farmers but actually, as the past year has shown, sound the death-knell for Indian biodiversity and public health as these seeds can be a gateway for getting new pests or plant diseases into the country. In a bid to protect our biodiversity, the Rashtriya Swayamsewak Sangh’s (RSS) own Bharatiya Kisan Sangh has led a campaign in Maharashtra against this hazardous contamination and to curb the illegal spread of HT Bt Cotton. Keep in mind that COVID entered the country using humans as a gateway; similarly, the American pink bollworm and fall armyworm have mysteriously entered India. We don’t know what new disease could be in store next?

A note on the history of

the organisation: SS founder Sharad Joshi, a farmer leader for few, was a pariah in the national farmers’ resistance movement. His stance on the World Trade Organisation (WTO), inclusion of agriculture into

the General Agreement on Tariffs and Trade (GATT) and the Dunkel Draft alienated him from the farmers who resisted this takeover in the late 90s. His obsession for “technology” and “progress” was only meretricious. His Frankenstein still lives eating into the

profits and health of maize

Following the same tradition, the SS has openly violated the Environment Protection Act, National Biodiversity Act and various other criminally punishable legislations by illegally planting and peddling an unapproved genetically modified organism (GMO) HT Bt Cotton in Maharashtra. This HT Bt cotton is a herbicide tolerant (HT) cotton variety that is unapproved by the Genetic Engineering Appraisal Committee (GEAC). The SC’s technical committee on GM crops had also a few years ago put a moratorium on HT crops due to bio-safety issues. Despite this, Ghanwat’s organisation has been unabashedly part of a criminal conspiracy to contaminate our native cotton seeds and biodiversity. Last year alone, he caused a damage of over Rs 400 crore to the legal seed businesses, from Maharashtra to Telangana. Due to such fly-by-night operators, the legal cotton businesses are finding their seed lots contaminated by this unapproved variety and, in fact, many seed companies have been taken to court and their licenses suspended, yet Ghanwat’s SS proliferates. They continue to do irreversible damage to our environment and health. The seed officials have booked various members for some of these offences, yet the ring leader — instead of being reprimanded — has been elevated to a power position.

The judiciary is an independent pillar of Indian democracy, and in no way should it be under pressure to echo the will of the Government of the day. For, if they acquiesce, Indian democracy will be dented. By appointing a committee without consultation, the SC may also have committed the same mistake as the Government. The CJI, if he wants the farmers and people to restore their faith in the judiciary, should disband the committee for now and evaluate the members’ profile. People like Ghanwat and his organisation who openly defy the rule of law, should be punished, not honoured.

(The writer is the Director – Policy and Outreach, National Seed Association of India. The views expressed are personal.)