World cottons on to forced labour in China

World cottons on to forced labour in China 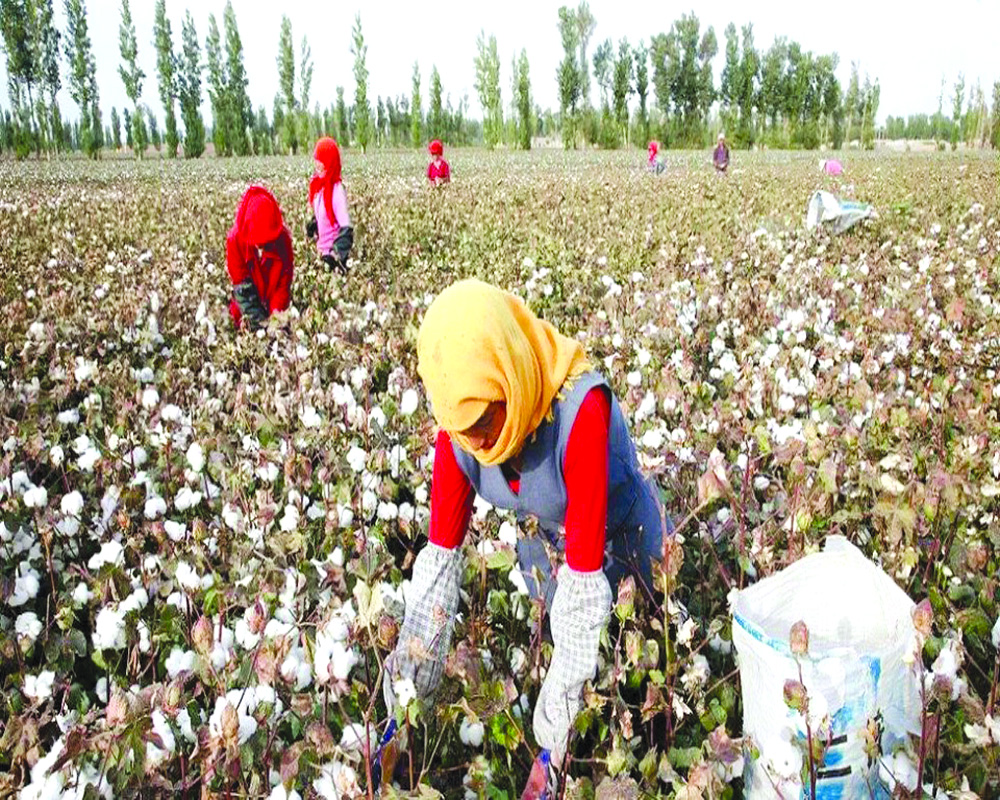 China is forcing nearly 5,70,000 Uyghur Muslims and other minorities into forced labour. This episode of coercing Xinjiang Muslims to pick cotton by hand has spurred a global reaction with Governments and big businesses calling for a ban on cotton imports from China

Once again Xinjiang has grabbed headlines with President Xi Jinping and his regime facing a new international backlash from both the governments and civil society organisations over its human rights violations and growing aggression towards Uyghur Muslims.

It is reported by various media houses that China is forcing nearly 5,70,000 Uyghur Muslims and other minorities of its Western Province to pick cotton by hand. But it is said that the actual overall figure is several hundred thousand higher. The core problem is that it is being done in the name of employment and their vocational training.

However, this episode of cotton trade has ignited global reaction with governments and big businesses calling for a ban on cotton imports from the Xinjiang region.

This province produces 85 per cent of China’s cotton and it contributes about 20 per cent of it to the global supply chain. Interestingly, Xinjiang also houses the country’s 11 million Uyghurs, who have been facing persecution and in large concentration camps built by the Communist State in the garb of vocational education and employment.

The Centre for Global Policy, a Washington-based think tank, in one of its recent reports says that it was very likely that a major share of cotton from Xinjiang was “tainted with forced labour”. Adrian Zenz, the author of the report said it was clear that the work scheme “involved a very high risk of forced labour”. The report also highlighted that the pickers, including some released from internment camps, were subjected to intrusive Government surveillance and political indoctrination sessions. In the beginning of December 2020, the US administration banned importing cotton from the Xinjiang Production and Construction Corps (XPCC), a powerful quasi-military organisation. The reason cited was involvement of forced labour from detained Uyghurs.

Now the question is which are the companies that are mainly purchasing these cottons for their high-end brands. Will they comply with the requests and demands made by the human rights organisations and many Governments to stay away from using these tainted cottons? International clothing giants such as H&M from Sweden, Zara, Adidas and Nike that use Xinjiang cotton for their clothes are urged not to use them as they are produced by forced labour of the Uyghur Muslims and other ethnic minorities.

In fact, a year ago the global non-profit Better Cotton Initiative (BCI) issued notices to companies like the H&M not to use cotton from Xinjiang over forced labour concerns.

By now, the H&M fashion chain has tried to regain the trust of the Chinese market. A statement released by the company stressed the importance of the Chinese market. Also, the Swedish company said it is working on strategies for material sourcing. It highlighted that it wanted to be a responsible buyer both in China and elsewhere in the world. H&M said, “By working together with stakeholders and partners, we believe we can take steps in our joint efforts to develop the fashion industry as well as serve our customers, and act in a respectful way”.

However, the irony is that the company is not directly referring to the current crisis that has emerged from Xinjiang cotton. It is well understood that the commitment and renewed trust come after it is facing a storm of criticism from Chinese customers and Government officials over its decision to not source cotton from Xinjiang.

However, the company began gaining attention in China only after the US, Britain, Canada and the European Union imposed sanctions on Chinese officials and entities over the alleged human rights abuse. And some other multinational companies like Nike and Adidas released similar corporate statements in 2020. However, many Chinese netizens commented that apology and sincerity from these clothing brands have not been seen so far towards China and its huge customer base.

As a result of this, tainted cotton controversy, companies like H&M have reported an expected business loss in the first quarter of this year amounting up to US$ 122 million, from December to February season.

It seems China is fast losing control of the Uyghur narrative. Both human rights agencies and various foreign Governments are exposing China’s years of exploitation of the residents of Xinjiang Province.

According to an estimate presented by the UN, nearly one million Uyghurs have been detained in mass prison camps in this region. All of these people are constantly going through torture, forced labour and mass sterilisation as claimed by the American Government.

Meanwhile, China has accused the Western nations, particularly the US, for engaging in a campaign to destabilise the country. Its Foreign Ministry spokesman Wang Wenbin dismissed the allegations of employing forced labour in Xinjiang cotton. He stated that “helping people of all ethnic groups secure stable employment is entirely different from forced labour”.

He also added that nearly three million people had been lifted out of poverty in Xinjiang. Now it is indicated that the efforts undertaken by the Chinese Government is to support Uyghurs getting employment.

And broadly these measures will directly support massive poverty alleviation programmes of the Central Government in Beijing. Further, Weng also said that all ethnic groups in Xinjiang Province were free to choose their own occupation. It implies that there is no restriction on the residents of the province, and they can take up any profession they want. But the ground reality is starkly different. Xinjiang has become a fortress. Beijing is not taking any chances while countering Uyghur extremism, mainly emerging radical Muslim groups. That is why it is taking absolute preventive measures to quell any kind of hardcore Islamic groups across the region.

In the past in 2014, attackers armed with knives left 31 people dead and 141 injured at a railway station in Kunming in the Yunan Province. Then in the same year in May, two SUVs drove into a busy street market in Urumqi, the capital city of Xinjiang. The occupants of the vehicles threw explosives over the crowd, leaving 43 dead and over 90 injured. However, no single group claimed responsibility, but the perpetrators were simply identified by the Chinese State as Uyghurs.

Thus China’s claim of it being a victim of international terrorism has come true. But these incidents have indicated an escalation of organised violence. Today, the problem is that no independent investigation of such terror claims is possible in Xinjiang. Because there is severe restriction on reporting in Xinjiang.

Another serious obstacle is that a Uyghur national talking to foreigners can have serious consequences. What can be rightly concluded from these attacks is that it is all about local anger against Beijing. And this is triggering the conflicts and resentments against the Central Government and its policies. The Uyghurs just have developed enough hatred against the Xi regime for organising entrenched re-education camps across Xinjiang.

Thus, the Uyghurs and other ethnic minorities are being restricted from exercising their basic rights in their own homeland.

What has now come to light is horrible. Even the information that had come to international media in 2018 and in 2019 indicated that “the Integrated Joint Operations Platform (IJOP) is used not only for picking out targets for detention as described in May 2019 Human Rights Watch Report, but also to provide data for Xinjiang’s larger Government information system that powers a range of Government functions. This suggests that authorities are increasingly sharing personal information across Government agencies.

China’s greed and aggression will not take it anywhere. Its plan to capture the whole planet is just a utopia of sort. Very soon, many of the nations, particularly in Africa, Latin America and in Asia will realise the danger of the Chinese debt trap. It is high time for US President Joe Biden to act. Instead of eulogising liberal ethos and blaming Trump for all the ills of America, Washington must be committed to stop China’s long aggressive march.

Directive issued to sanitise all cold storages in UP

Mayawati for free Covid vax to all poor