Outpouring of support from US for India, COVID-19 help touches USD half a billion

Outpouring of support from US for India, COVID-19 help touches USD half a billion 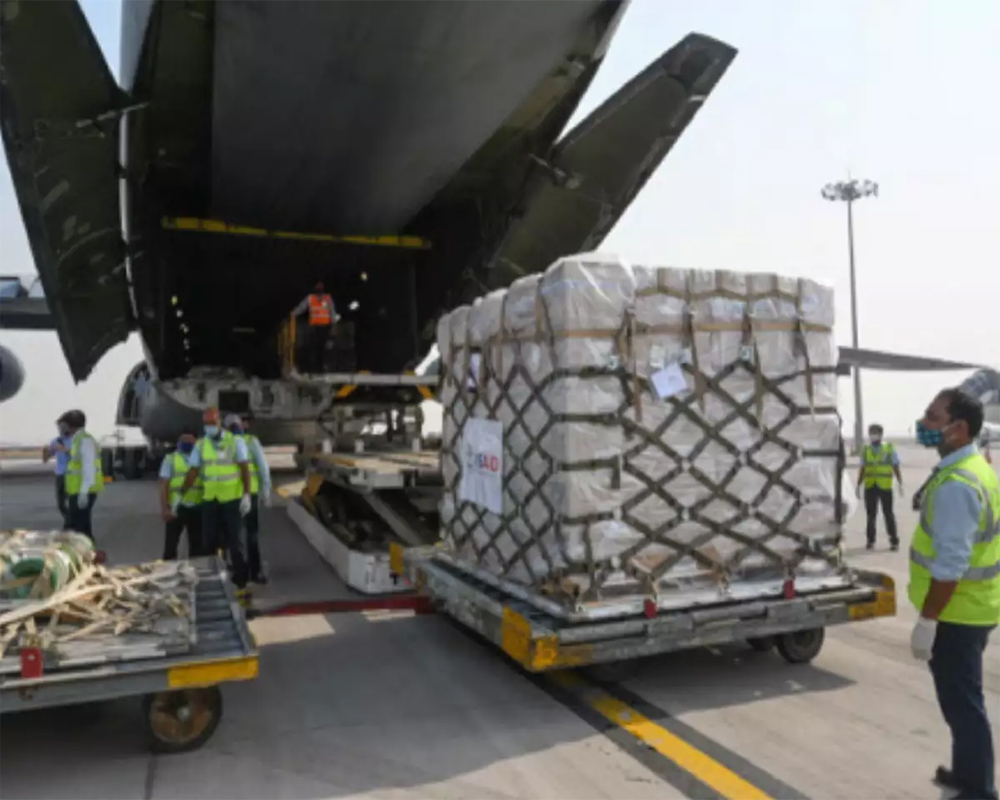 Less than a fortnight after President Joe Biden in his conversation with Prime Minister Narendra Modi pledged his country's steadfast support for the people of India, America has responded with an unprecedented financial assistance worth nearly USD half a billion.

Biden spoke at length with Modi last month and conveyed solidarity with India in its fight against the viral disease. He assured the prime minister that the US and India will work closely together in the fight against COVID-19.

"Just as India sent assistance to the United States as our hospitals were strained early in the pandemic, we are determined to help India in its time of need," Biden had said in a tweet.

Reflecting an overwhelming support for a "natural ally", the entire country not only the administration, but also the corporate sector which created a global task force, as well as Americans and Indian-Americans have opened their coffers for India.

This half a billion dollars includes USD 100 million pledged by the Biden administration, USD 70 million by pharma major Pfizer and 450,000 Remdesivir doses, the governmental purchase price of each of which in the US is USD 390.

Thousands of oxygen concentrators and plane loads of life saving drugs and health care equipment are flying off the United States for India almost every day.

Several companies like Boeing and Mastercard have announced financial assistance worth USD 10 million each, Google has pledged USD 18 million, which the Global Task Force that comprises CEOs of top American companies have already pledged USD 30 million worth of life saving equipment.

Describing it as a “Berlin Life Moment”, Mukesh Aghi of US India Strategic and Partnership Forum (USISPF), told PTI he expects the assistance to touch almost USD 1 billion by the end of the month. “It is emotional for the diaspora, almost everyone has someone who has been touched by COVID-19,” he said.

Nisha Desai Biswal, president of US India Business Council (USIBC) said, “The outpouring of support from the United States over the past two weeks was a spontaneous mass mobilisation of support for the Indian people from across the America government, business community and diaspora community and the American people.”

“It is unprecedented, and it reflects both the deep bonds between our two countries and the gratitude that Americans feel for the role India played in supporting the United States when we were experiencing our COVID surge last year,” she said.

However, given the “speed and severity” that have overwhelmed the capacity of hospitals and local authorities, more assistance will be needed and for a sustained period of timescale of the pandemic, Biswal said.

People of the country and the Diaspora too have come out in large numbers. Indian-American Vinod Khosla has committed USD 10 million, top corporate leader John T Chambers has promised USD 1 million.

“There has been overwhelming support and offers of assistance from the US Government, private sector, diaspora and the American public at large. In fact, in my interactions in recent days, the US interlocutors across the board ask me, ‘tell us what more we can do for India'”, India's ambassador to the US Taranjit Singh Sandhu told PTI.

“They recall with fondness the help India gave. These are reflective of strong partnership and close people to people ties between our both nations. We deeply appreciate these gestures. We will continue to engage with the US in our collective fight against the pandemic,” he said.

While Microsoft is partnering with the US government in providing aid and oxygen, FedEx and UPS have taken up the mantle of taking care of the transportation of life saving health care equipment like oxygen cylinders, ventilators and oxygen concentrators to India.

“This is an incredible outpouring of generosity, which people have come to expect from America. When the world has a crisis, beyond politics, beyond dispute America steps up,” Rangaswami said.

“It is comforting to see US cargo jets with much needed medical supplies landing at the Delhi airport regularly,” said Karun Rishi, president of the USA-India Chambers of Commerce.

Noting that the stakes are very high for the entire world, he said India's success or failure to come out of this once in a century crisis will have a direct impact throughout the world.

Echoing Biswal, Rishi said that more needs to be done.

“The scale of assistance to India needs to increase and speeded up. To make some reasonable impact to tide over this crisis, India may need between USD 25-USD 50 billion in assistance in the form of vaccines, technology transfer, increasing vaccines and therapeutics manufacturing capacity, medical equipment and public health measures,” he said.