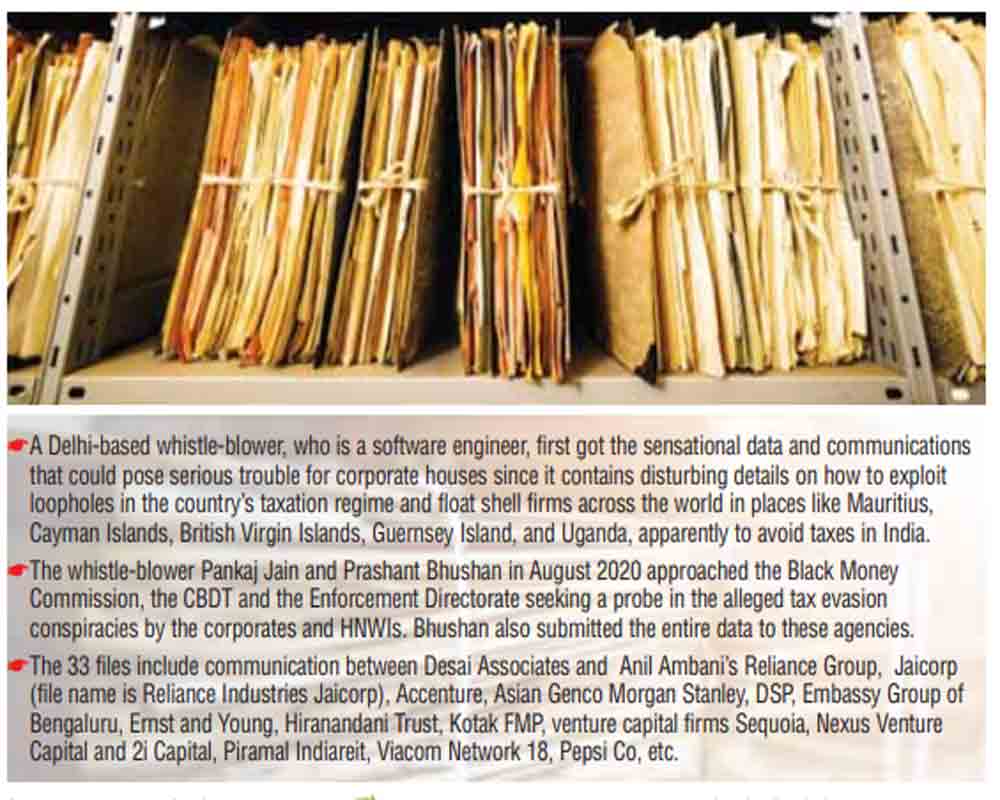 A Delhi-based whistle-blower, who is a software engineer, first got the sensational data and communications that could pose serious trouble for corporate houses since it contains disturbing details on how to exploit loopholes in the country’s taxation regime and float shell firms across the world in places like Mauritius, Cayman Islands, British Virgin Islands, Guernsey Island, and Uganda, apparently to avoid taxes in India.

The Pioneer has accessed the 1.5 GB data, which has 33 files with numerous correspondences between Nishith Desai Associates and big corporates and HNWIs. Noted advocate Prashant Bhushan has alleged that the ‘Desai Papers’ are on the lines of the ‘Panama Papers.’ The Panama Papers relate to a Panama-based tax firm’s involvement in helping companies and HNWIs in avoiding taxes by floating companies in tax havens.

The whistle-blower Pankaj Jain and Prashant Bhushan in August 2020 approached the Black Money Commission, the CBDT and the Enforcement Directorate seeking a probe in the alleged tax evasion conspiracies by the corporates and HNWIs. Bhushan also submitted the entire data to these agencies.

After the role of Jain in leaking the data came to the knowledge of Desai, he approached the Delhi HC to restrain Jain.  On February 17 last year, he filed a case against Jain in Delhi HC directly in the chamber of Justice Rajiv Sahai Endlaw, without going to the Registry. Shockingly, the case was titled ‘Anuradha Vs Bajrangi’ whereas it should have been Nishith Desai Vs. Pankaj Jain.

On February 19, 2020, the Delhi HC appointed a Court Commissioner along with three Price Waterhouse Coopers (PwC) staffers, four employees from Desai’s office, and four Delhi Police cops to raid Jain’s home at Pitampura in Delhi even though he is named as Bajrangi in the Delhi HC’s records. As many as 30 devices, including several laptops, hard discs, and mobile phones were seized from his home.

Jain could not enter the HC or attend the virtual hearings as he was named Bajrangi in the court’s records as per the petition filed by Desai, who showed himself as Anuradha in court records.

In December 2020, Jain alias Bajrangi, told the Delhi HC that, he had already given all data to Bhushan. On April 13, Justice C Hari Shanker questioned the so-called “Confidential Club” in this case and the need to keep the court orders confidential. Now the case on the ‘Desai Papers’ is listed for July 29.

In the initial hearing, surprisingly the Delhi HC imposed a “Confidentiality Club” in this case which is rarely used in Intellectual Property cases, where petitioners do not want the opposite party to know details of Intellectual Rights. The big question is how the “Confidentiality Club” was imposed, as this is just leakage of information of alleged tax evasion, which is already with the CBDT and the ED?

In his complaint, Bhushan also alleged that the documents showed HNWIs discussing how to evade taxes in India and route funds through tax havens, and take claims on tax implications in other countries.

“I am providing these documents to you in a USB drive in two folders. The first folder titled ‘briefcase’ contains all available documents with us. A second folder titled ‘analysis’ contains documents on a few individual/entities on which a study has been done and which prima facie show gross violation of law,” said Bhushan detailing documents of communication between Desai Associates with Sequoia India, KP Balraj, IDG Ventures, the Embassy Group, the Hiranandani Trust, Suresh Nichani, Bala Deshpande, etc.

“These documents reveal structures of a web of shell companies around the world. Information contained herein is disturbing and shows the impunity in which the economic security of the country is being violated in express violation of FEBA, RBI circulars and IT Act among others,” said Bhushan seeking a thorough probe in the matter.

There is a file in the name of one Salve linked to Advaita India Energy Ventures and Advaita India Ventures in Guernsey Island, London and other tax havens. As per the documents and letters from Desai Associates the firms named as Advaita’s directors are Salve (also chairman), John Forry, Robert Paul King, Kiran Vadlamani and Narasimharamulu Pantam.  As per the Desai Papers, these firms have offices in the UK, Mauritius and Guernsey Island, apart from offices in India.

Sequoia and KP Balaraj are already under the radar of the ED for their funding in former Finance Minister P Chidambaram’s family related ventures like Vasan Eye Care.

Interestingly advice was given to Bengaluru-based 2i Capital Asset Management Company Limited on how to float a real estate fund named Zameen-e-Hind Modarba, an Islamic Sharia funding model by registering in Mauritius.

In his petition Bhushan said, “One set of documents contained in the said original Hard Disk, inter alia, revealed that a prominent Real Estate Group, which also figures as part of the revelations in the aforementioned “Paradise papers”, apparently had approached the Law and Tax advisory firm, M/s Nishith Desai & Associates (hereinafter, NDA), for advice on the creation of a corporate structure to bring its offshore wealth to India and escape the “anti-avoidance provisions of the ITA”.

Another set of documents, Bhushan said,  contained in the said original Hard Disk, inter alia, reveal that a very influential individual approached the tax consultant for advice regarding his corporate entities “[...] specifically in connection with a health check on the structural and operational aspects of KPB Cayman and KPB Investments, to ascertain the risk that KPB Cayman or KPB Investments may be considered to be an Indian resident, or liable to tax in India on account of a presence in India”.

The tax consulting firm then conducted an audit on behalf of the said entities and submitted its report with specific advice on the creation of a complex and opaque offshore corporate structure in various tax havens designed specifically to evade taxation in India.