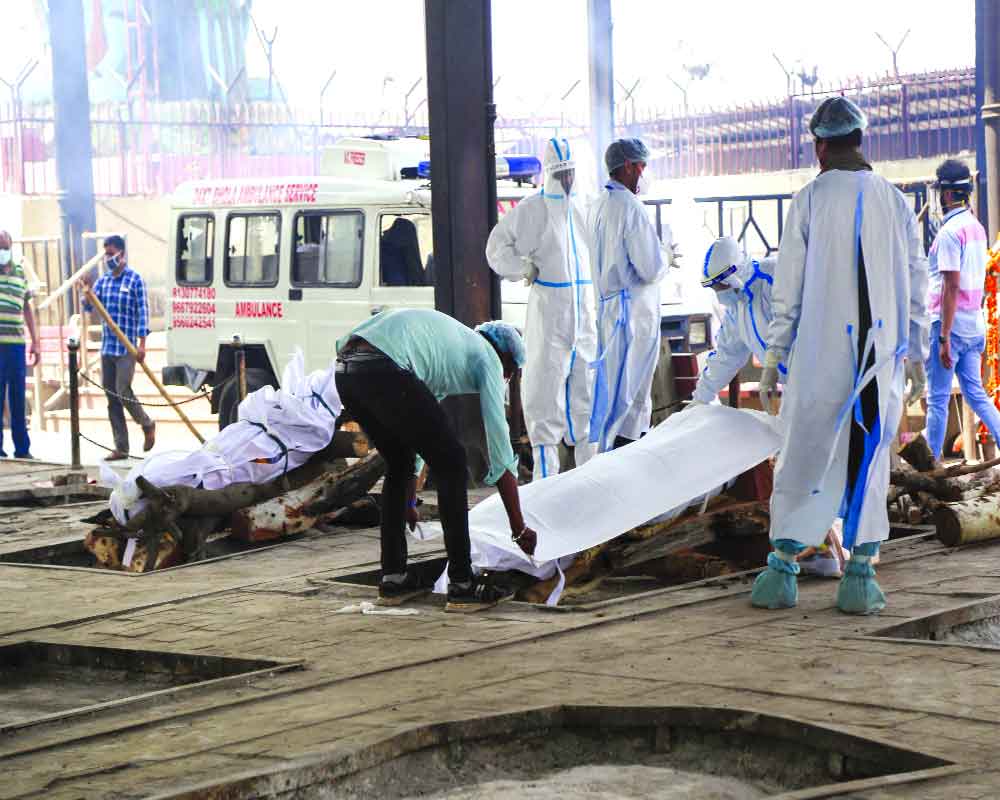 There are things one takes for granted, like the cloth used to cover a body. Not any longer. The “kafan” (shroud), generally a thick, white, unstitched piece of cloth, is suddenly dearer. It is on account of the unusual spike in the number of deaths owing to Covid-19. More people are buying the cloth to drape their dear ones on their final journey than for the living these days.

In Bihar and Uttar Pradesh, small handloom and machine loom units are busy making bolts of “kafan”. The production has been ramped up to meet the surge in demand. While these units produced 10,000 individual pieces of the shrouds a month, they are coping with the demand for a similar number every day. That’s not it. They need to be cut to size, packed and transported as fast as possible.

Such looms in Bihar’s Gaya are functional round-the-clock. The labourers have no shift breaks. They are meeting the challenge to dispatch the stuff not only to various places in Bihar, but Jharkhand, Madhya Pradesh, Chhattisgarh, Odisha, West Bengal and even the north-eastern States.

An official of the Handlooms and Textile Department of Uttar Pradesh said that the demand of one lakh “kafan” per month manufactured in Lohta area of Varanasi, Mau and Azamgarh has now nearly trebled. The powerloom units of these areas supply to entire northern India, from the Poorvanchal region to Jammu & Kashmir, Himachal Pradesh, Rajasthan, Gujarat and other parts of southern India.

“Nowadays these are done on powerloom and it’s no more a handloom material. Raw materials come from Gujarat and then made in looms of UP, Bihar and then supplied to most parts of India,” said the official.

Underlining a factor of class divide, the official said as the making of the product is not a profitable one, it is mostly confined to areas where cheap labour is available, like in Bihar, UP and West Bengal. Manpur in Gaya is known as the Manchester of eastern Bihar and the workers here are doing overtime to meet the demand for about 50,000 “kafan” per day for adjoining areas and other States. Besides cotton, the units from here also make shrouds out of polyester and silk.

“We have been working round the clock. Pained to make bolts of kafan. The demand is high, but we have been supplying with full integrity and at same price as earlier. No black marketing for this product,” said Dwarika, who owns a small unit at Patwatoli, Gaya, which has several small units.

He said all religions require this piece of cloth and the price could vary from place to place and depending on sizesrange from Rs 100 to Rs 1,000.

According to Cotton Corporation of  India (CCI) sources, the increase in demand of the “kafan” is “indeed unfortunate”. The CCI, however, is concerned about the continuous drop in cotton yarn prices since the beginning of May due to non-operational hosiery and garment markets that had witnessed a peak at the beginning of the year following the tapering down of the first surge of Covid-19.

Prices of almost all counts of yarn have dropped by at least Rs 10 a kg as demand is low due to the second wave of coronavirus. Production in textile mills has dropped and it is impacting yarn offtake, according to Anand Poppat, a cotton trader from Gujarat.

The Cotton Association of India says the last six months were a favourable period for Indian spinning mills because there was a huge shortage of cotton yarn due to last year’s Covid-19 lockdown and huge demand for yarn came from domestic and international markets.