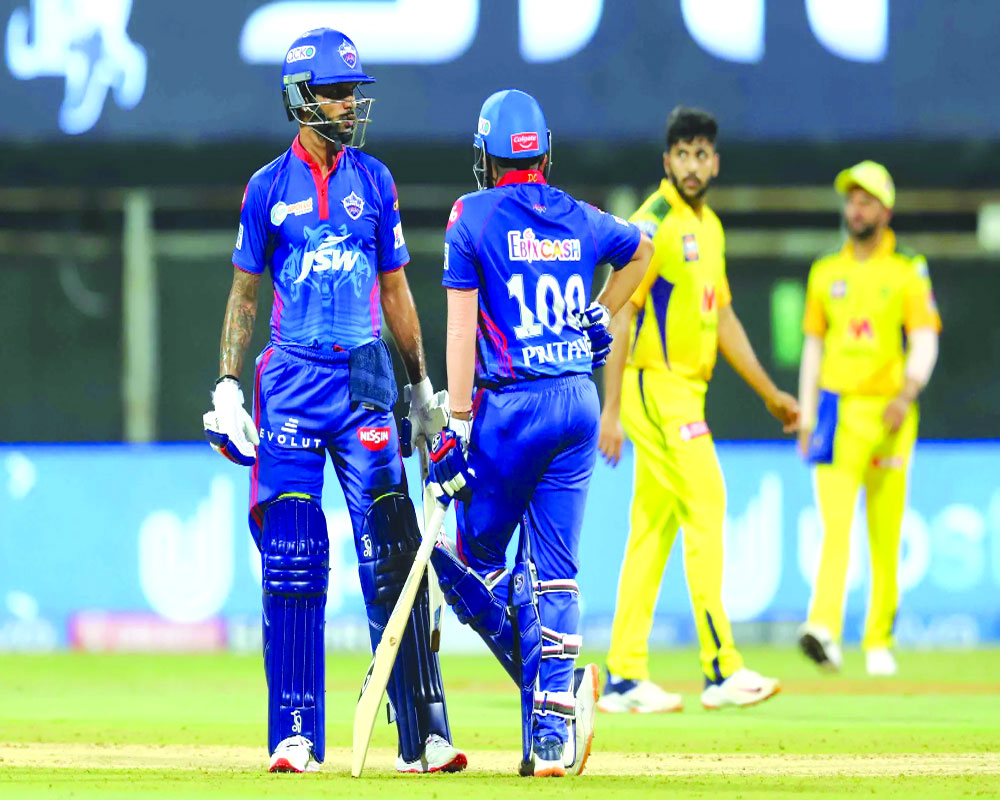 Openers Shikhar Dhawan and Prithvi Shaw pummelled Chennai Super Kings into submission with their explosive batting as Delhi Capitals romped to a seven-wicket victory in their Indian Premier League opener here on Saturday.

Dhawan smashed 85 off 54 balls and Shaw amassed 72 in just 38 deliveries as DC chased down a target of 189 comfortably with 1.2 overs to spare.

With Shaw and Dhawan in rollicking form, Delhi Capitals started on a rousing note and were sitting pretty at 65 for no loss at the end of the Powerplay overs.

The two openers went for their big shots with impunity, and on all sides of the Wankhede Stadium, as Delhi Capitals raced past 100 in quick time.

Needing 90 runs in the last 10 overs and with all wickets in hand, DC could afford to dictate terms and put pressure on CSK. And Shardul Thakur and Sam Curran were sent for a leather hunt put CSK completely out of contest.

For Shaw, the innings was an extension of his Vijay Hazare Trophy form and the slight tweak in his technique and a straight backlift is working wonders for Shaw.

“I worked on the back-and-across (movement), I focused with Pravin sir as well. I think it’s working quite well,” Shaw said.

While the CSK bowling attack had no answer to the strokes played by the DC openers, what added to their misery were two dropped catches of Shaw on 38 and 47, with Moeen Ali being the unfortunate bowler on both occasions.

Making full use of the reprieves, Shaw raced to half century in just 27 balls while his senior partner Dhawan go to the landmark in 35 deliveries.

Shaw hit nine fours and three sixes, while Dhawan struck 10 boundaries and two maximums before getting out to miss out on a hundred.

Earlier, Suresh Raina announced his IPL comeback with a blazing 36-ball 54 and powered his team to a solid 188 for seven.

Sam Curran smashed 34 off only 15 balls to prop up the CSK innings towards the end. Curran hit four fours and two sixes.

The last five overs yielded 52 runs for CSK, thanks to Curran’s power-packed innings.

Asked to bat first by Rishabh Pant, Ruturaj Gaikwad got CSK off the mark with a pleasing drive through the off side between point and cover, two deliveries after being beaten all ends up by a Chris Woakes outswinger.

Last season’s runners-up DC didn’t have to wait long for their first breakthrough as Avesh Khan (2/23 in 4 overs) had Faf du Plessis trapped in front of the wicket in the second over.

In the first ball of the third over, Woakes had Gaikwad caught in the slip cordon as CSK slipped to seven for two.

In came Raina — he had missed the last IPL owing to personal reasons — and in the company of Moeen Ali, the seasoned campaigner revived CSK’s innings and looked to put up a challenging total against a strong DC batting line-up at the Wankhede Stadium.

Experienced off-spinner Ravichandran Ashwin cut short Moeen’s innings when the all-rounder got himself into an uncomfortable position while going for a reverse sweep, the ensuing top-edge ending in a good catch by Shikhar Dhawan, who ran backwards from short third man to hold on to the ball.

Ambati Rayudu came in and straightaway got into the act, hitting a couple of sixes and a four to race away to 23 off 16 balls before Tom Curran ended his stay in the middle.

Meanwhile Raina went about his task in a manner that did not give the impression that he was coming back to top-flight after a long hiatus.

Raina got himself going with a four off Woakes and then worked Ashwin for two successive boundaries, not afraid to dance down the wicket against the wily spinner’s flight.

Using his feet well, the veteran southpaw hoicked leg-spinner Amit Mishra for two and also got a maximum against Ashwin.

It was no different with Marcus Stoinis as Raina pulled the Australian medium pacer for another six before being run-out following a mix-up with Ravindra Jadeja (26).