A wider street beyond tradition

A wider street beyond tradition 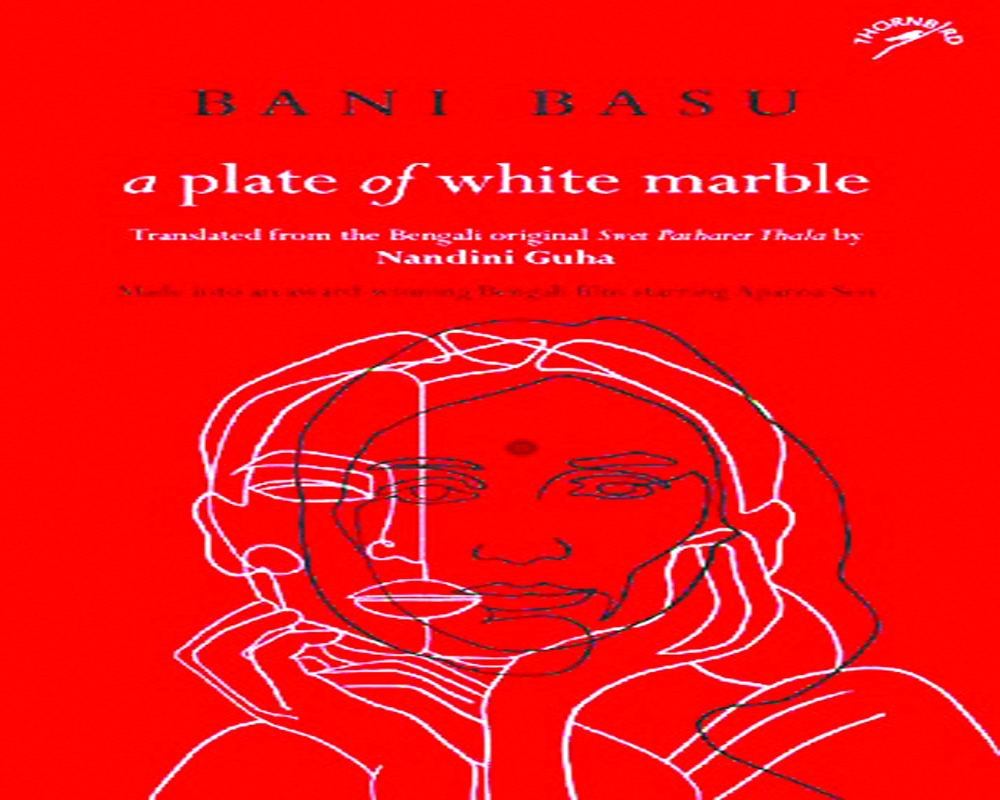 A Plate of White Marble

Bani Basu’s Shwet Patharer Thala (A Plate of White Marble) has some answers which speak to our time as it did to the one it so brilliantly evokes, writes Rajat Chaudhuri

Bani Basu’s Shwet Patharer Thala (A Plate of White Marble) has in its three decades since publication got deeply embedded within the Bengali reader’s psyche. One would like to think that books such as this, a story of the young widow Bandana, in post-independence Calcutta, and her relentless battles against orthodoxy, where a son and a lover play nuanced and memorable roles, fortify the winds of liberalism which are on retreat in our troubled times.

So it is definitely good news that this much-admired novel has now been made available to readers in English in a pitch-perfect translation by Nandini Guha. Many who would have been introduced to this story through the movie featuring a sterling performance by Aparna Sen as the widowed Bandana, would nonetheless do well to read the book because the layers of the story with its depths and nuances are not always captured in the language of celluloid.

Bandana is married to the elder son Abhimanyu of the well-to-do Bhattacharjee family of Shyambazar in north Kolkata but early in the plot the husband dies of heart attack. It is interesting to note that in the movie it is a car accident which kills him and there are other such departures from Basu’s original plot. Immediately after the husband’s death the weight of patriarchy, personified here by the father-in-law and the acquiescing members of the joint family of her in-laws, come to bear upon her. Bandana is pushed into a life of forced austerity and abnegation where she has to wear white saris, live like an ascetic and have frugal meals on the floor from a plate of white marble.

The customs of this prejudiced household are revealed at the beginning when the author writes, ‘The men of the house, the ruler class that is, did not have to bother about any restriction. They were reserved for the women and women alone.’

The first knock on the edifice of this stultifying tradition comes from her son Abhiroop, still a child, who suffers convulsions and the doctor makes it clear that his mother’s sudden transformation into a white-sari clad ascetic is the cause. Despite their reluctance, her in-laws have to relent and make some concessions in allowing her to wear a coloured sari but soon new situations bring the clash with orthodoxy out in the open.

In the carefully woven plot appear other characters like Mili and Koli, two sisters-in-law of which the former becomes a conduit for the widow’s oppression while Koli is more of a confidante who eventually raises her voice in Bandana’s support. But there is no easy resolution of Bandana’s woes at her in-laws’ till the appearance of an uncle, the nomad-like Somnath babu, who takes her away from the Bhattacharjees.

Still, back at her own home, things won’t be easy as with the kindly uncle’s passing and Abhiroop’s coming of age, new tensions begin to simmer which might very well tear her apart. Bani Basu develops her characters with love and a kind of academic rigour which would appeal to students of literature while pleasing the seeker of a good story. It is also not difficult to draw a line connecting Tagore’s powerful protagonist Mrinal of Streer Patra (A Wife’s Letter), Saratchandra’s equally uncompromising heroine Kamal in Sesh Prosno (The Final Question) and the nonconformist Bandana of this novel, and examine how these portraits of liberated women reflect each other across the corridors of Bengali fiction.

Calcutta, from the decaying splendour of the ‘north’ to a ‘south’ of Hindustani classical music concerts and busy flowing streets is also a character in the background of this finely crafted novel and often you want to linger and enjoy the passing scenery — the passage of time itself, as the river of the narrative draws you along:

‘The concert came to an end after the Bhairavi Thumri. It was past midnight. The roads were empty but well-Iit. The sky above was full of stars. Bandana had never seen Kolkata looking so beautiful. The huge silhouette of the Victoria Memorial could be seen like some mysterious, celestial presence in the distance.’

But most of all you read this book to marvel at the many roles a strong woman like Bandana plays as she juggles between mother, daughter-in-law, oppressed widow, and finally an emotional connect with her son’s art teacher Sudipto Sarkar. Which of these will redeem which will break her apart or is it some totally new calling, a wider street that will finally let her discover herself behind many masks? This engaging novel has some answers which speak to our time as it did to the one it so brilliantly evokes.