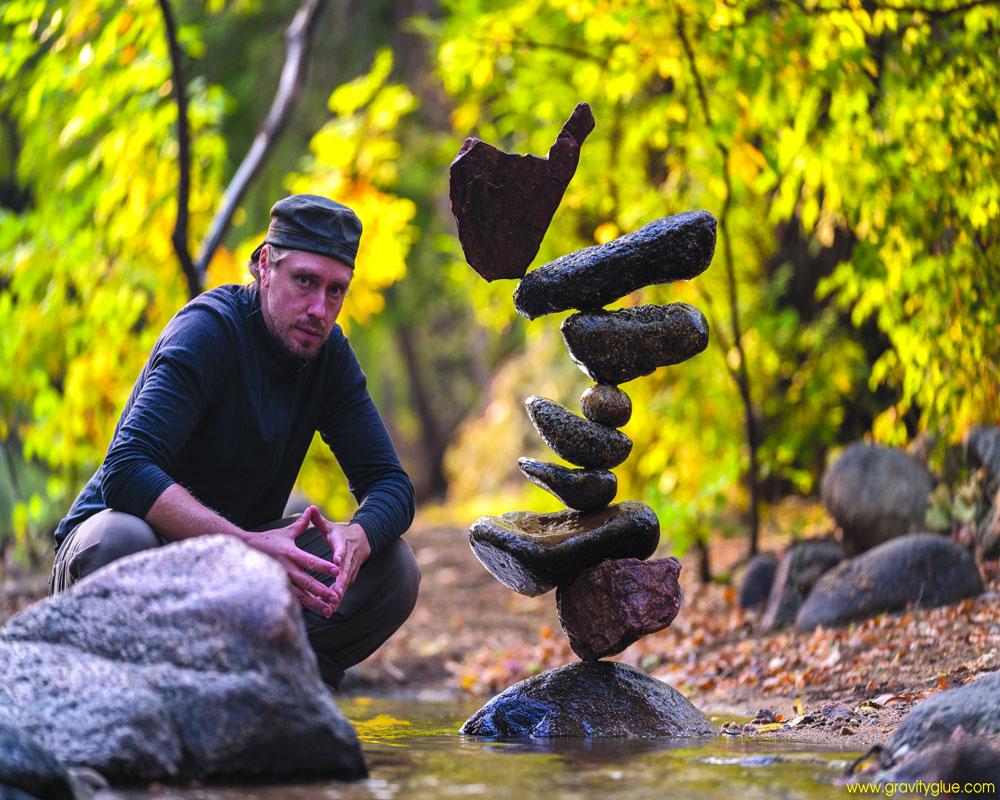 MICHAEL GRAB, 36-year-old artist based out of the US, has been taking the Internet by storm through his works. He speaks with MUSBA HASHMI about how the idea of using gravity as glue to balance stones hit him and the challenges associated with it

What if one tells you that you don’t need glue to stick together, or balance, stones to create structures? Many will laugh it off. Meet Michael Grab, a 36-year-old USA-based artist, who has been doing this so effortlessly that it is almost hard to believe whether they are for real. Not to mention, this unique form of art has earned Grab, the most sought after blue tick on his social media accounts.

Grab has been using gravity as his glue to balance stones for years now.

“I began balancing in the summer of 2008, almost by accident. I was at the local creek here in Boulder with a friend. We were casually looking for a mineral called obsidian. As we were moving some rocks around, we began balancing them on top of one another. We were also having a psychedelic experience at the time. I fell in love with the process of balancing almost immediately, found it to be highly meditative and generally therapeutic. So, I decided to continue practicing on my own in the free time,” Grab, who goes by the name Gravity Glue on Instagram, tells you.

The practice got Grab interested, so much so that he decided to bid adieu to his job. “I decided to quit my regular job and pursue the practice full time in 2012, when I also started traveling internationally to practice and sometimes perform/teach at public and private events along the way,” Grab, who has so far done this art in 25 countries, including all over Europe, parts of Asia, and Australia, as well as in North/Central America, tells you.

Initially, Grab didn’t think of becoming a full time artist, it was only because of curiosity that he decided to make these creations. It was not as if he intended to give out some message.  “I began practicing regularly for the therapeutic and artistic qualities I felt. I did not foresee becoming a full time artist, with a message, nor having the ability to reach such a large audience, hence I did not intend much to begin with, other than following this newfound curiosity, which quickly grew into a full time passion. For me, it’s a literal message of balance, with Nature. I enjoy sharing the meditative quality and yoga of both the process and the subject. I hope to draw viewers’ attention into this kind of transcendental beauty I experience working in and with Nature. The precariously balanced structures also serve as a symbol that “anything is possible”,” he explains.

One may wonder if what Grab does is permanent. The answer is, obviously, no. “So far, none of my work is permanent. But I’ve done my ephemeral stone balance work almost all around the globe,” he says.

Grab is not at all choosy in terms of stones for his balancing work, but he prefers the harder stones as they work better. “I use whatever stones are available in the variety of locations I’ve been. But generally, I hope to find harder stones, because they work better for balancing. I also look for interesting shapes and colours, depending on what is indigenous to the location. In Boulder, I mostly use types of granite that are found here in the creek,” he says.

Nothing comes easy and when talks about balancing stones, it is sure shot a difficult art to master. “There are many challenges associated with the practice. One of which is direct interaction/ integration with nature, which means I need to be aware of wildlife, wind, tides and anything else that can happen inside this system of Nature, and outside my control. Conditions often force me to listen and adapt, which is an element I highly enjoy, despite the challenge at times. But, probably the biggest challenge is the focus that’s sometimes involved to create more technically advanced structures. This focus is required to tune into tiny vibrations of the rocks, in order to adjust them correctly into a balanced position,” he tells you.

For those, who are curious enough to know about the trick that Grab follows, there is none as such. “There are no tricks. It’s simply a matter of practice and patience. But physically, the balance works like a camera tripod, where the mass of the rock is centered between three points.  These points are found in the natural texture, or natural indentations in the surface of the rocks. When the contact edges are close together, it looks like a point. And, also the closer together the edges are, the more focus is required to achieve the balance. I find the balance by feeling for tiny vibrations that travel through the rocks anytime they touch one another. When the balance is reached, I call it the zero point, when I intuitively feel that the rocks are balanced,” Grab explains.