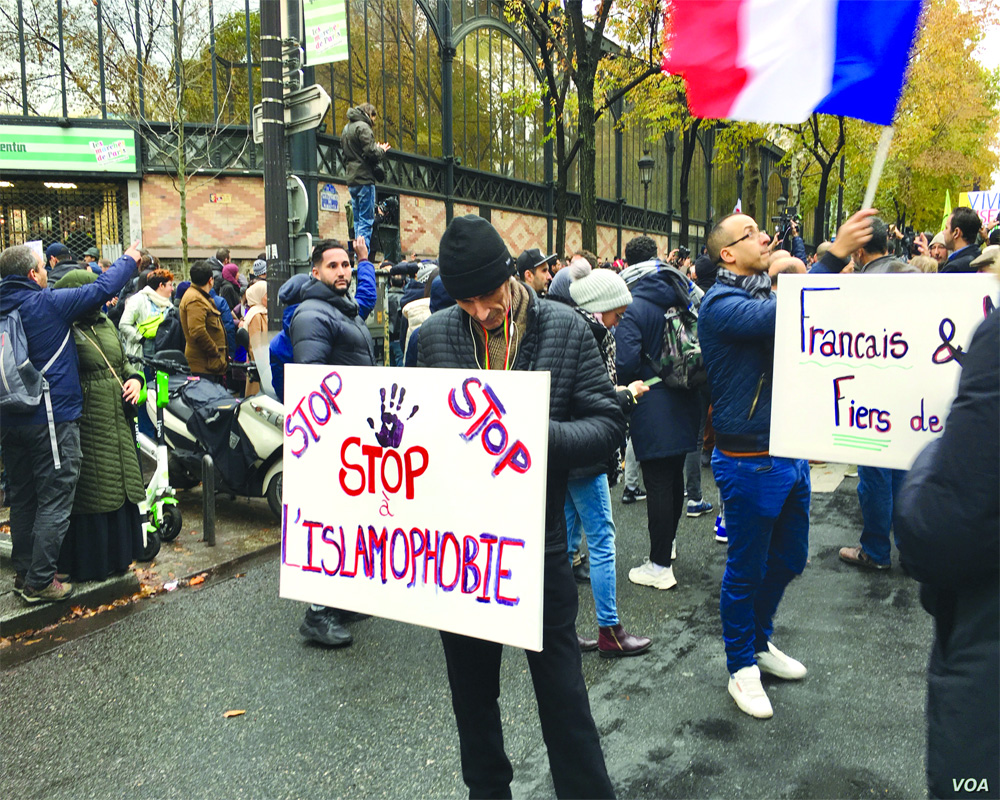 Only time will tell if France's anti-separatism law will find a solution to the problem of conflict between its republican values and Islamic customs and beliefs, or it will backfire

The beheading of Samuel Paty and brutal murders in Nice cathedral of other French nationals by radical Islamists, President Emmanuel Macron’s poignant defense of liberty and France’s republican values, his pictures stamped over by shoes in some Muslim nations are unforgettable occurrences.

Attacks followed in Germany and Austria too. The caricature of Prophet Mohammed has snowballed into a clash of civilisation in Europe, with blood and gore on both sides.

To decide which side is right is  difficult: liberty holds a sacred place in the French history, culture and value system — the nation underwent a revolution for it; while followers of Islam believe it forbidden to pictorially depict Prophet Mohammed, worse so when done provocatively.

American political scientist Samuel Huntington stated, unlike ideological conflicts, cultural questions involve yes or no — zero sum choice, as they have deep historical and emotional meanings attached to them, which can’t be negotiated.

Most of Europe’s migrants for past decades have been Muslims, due to reasons like proximity, demographic boom in Islamic states, decreasing population of Europe, better economic opportunities, political instability and violence in West Asia and North African (WANA) region.

Three decades ago, Huntington prophesied of the dangerous conflict between the West and Islam, in his famous work.

Huntington on conflict between West and Islam

Huntington stated that there are fundamental conflicts between the value system of the West and Islam,  due to which a societal cold war is raging in Europe, which will come to a clash in the early decades of the 21st century.

The reasons for the clash are permanent as well as immediate. He wrote that the problem of the West is not only with violent Islamist extremists but Islam itself, so demonstrates the 1,400 years of history.

Their historical dynamics display that they have always been engaged in a deadly combat for power, land and souls. The universalistic nature and the missionary character of both the religions pit them against each other. Both have starkly different versions of what is right and wrong. Failure of liberal democracy to hold in Islamic nations is a repeated phenomenon — the reason, opposition of Islamic culture to Western liberal concepts.

Also, Muslims find it difficult to assimilate and integrate in the Western culture. While the Western system is based on separation of Church and Caesar (State); Islam is a vision of a perfect society, a way of life with intellectual, cultural, political and social ramifications.

There’s no division of state and society in Muslim countries. For the West, the nation state has been an apex of political loyalty, in Islam the main focus of loyalty is ummah, the religious community at large. Idea of nation state is incompatible with the sovereignty of Allah.

Organisation of Islamic Conference is the only interstate organisation of its kind, no such organisation exists for any other religion. Same radical Islamic fighters fight in the name of Islam from Africa to Europe. Religious students from all over the world go to study in WANA, International Islamic conferences, international movement of ulemas, funding from WANA nation for spreading Islamic ideology in the world are examples of this phenomenon.

From 1970s, Islamic resurgence is encompassing the Islamic world with increased recommitment to Islamic values and religiosity by the people as well as the governments which is also responsible for increased militancy.

Huntington says, it’s the product of the modernisation and urbanisation in these societies which created alienation and identity crises, to which Islam offered a solution. A reason why youngsters, educated, intellectuals — especially the first generation to get higher education and urban migrants — throng towards Islamisation as Islam offers them a dignified identity. Mass of revolutionary Islam is a product of modern society.

The cause of renewed tension between Islam and the West in the 21st century are: the demographic boom in Islamic nations, with high unemployment levels, the youth forming recruits for Islamist causes, giving rise to problems from migrant crises to militancy and border conflicts; Islamic resurgence; Western imposition of its values and institutions on the Muslim world; collapse of Communism removing the common enemy.

Muslims fear the threat Western power poses to their society and beliefs. Even the Islamic allies of the West find their culture decadent and materialistic.

Similarly, western nations see Muslim migrants as a threat to their culture.

France is home to the largest population of Muslims in Europe, so it comes as no surprise that the clash is playing out most vigorously there. France’s anti-separatism Bill, which is about to become a law, is based on Huntington’s analysis. What’s novel is, it attempts not only to target Islamist extremism, but also Islamist separatism — defined by Macron, as an ideology that aims to build a parallel society in France, where religious rules override civil laws, and undermine the values of French Republic: liberty, equality, fraternity and laïcité (France’s strict separation of religion and state).

The law targets the political, social and intellectual aspects of Islam, ensuring precedence to France’s republican values, limiting Islam to only the religious sphere.

It attempts to shift the principal loyalty from ummah to the French Republic, phrased by Macron as liberating Islam from foreign influences.

It makes it easier for the Government to shut down mosques, associations and schools found criticising France’s republican values. Religious institutions and mosques are required to sign a pledge to respect the republican values for receiving state subsidies; and they need to declare foreign funding beyond a prescribed limit. It criminalises anyone putting pressure on public service providers to deviate from France’s secular values in the name of an ideology or religious extremism.

It outlaws virginity certificates and refusal of women examination by male doctor. Homeschooling is allowed only on official authorisation on the ground of health and handicap.

The Bill faces opposition from Muslims community and Left-wing Opposition, which claim it to be unfair targeting and stigmatising of the Muslim community which will lead to its alienation — a fear which is not misplaced.

Huntington’s theory suffers from the same problem that any such theories do: generalisation. While the theory might apply to a section however small or big, certainly there exist devout Muslims whose prime loyalties are reserved for the state, for example the Muslim soldiers of France, and many others like them.

Only time will tell if France’s anti-separatism law will find a solution to the problem of conflict between its republican values and Islamic customs and beliefs, or it will backfire; in either case, it will pave the path for many other nations, to follow or learn what not to do.

(The author is a public policy analyst and a lawyer.)