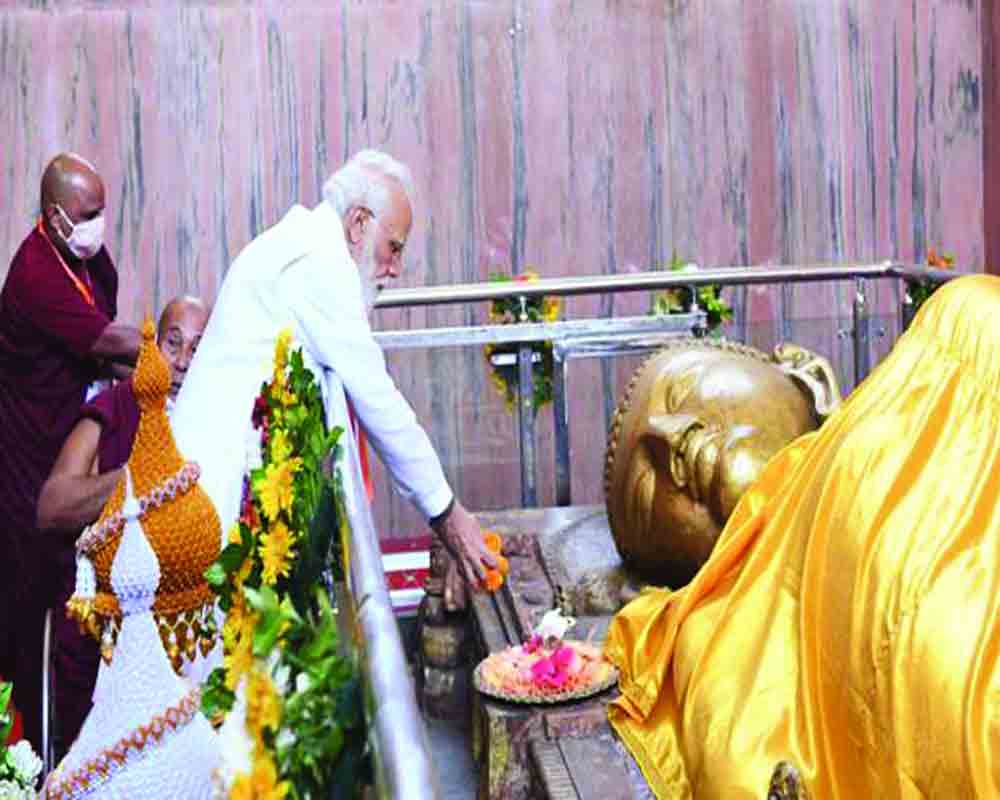 Prime Minister, Narendra Modi, participated in an event marking the celebrations of Abhidhamma day at the Mahaparinirvana temple in Kushinagar.

Addressing the event, PM Modi noted the auspicious occasion of Ashwin Poornima and the presence of holy relics of Lord Buddha. Welcoming the delegation of Sri Lanka, he traced back the connections between India and Sri Lanka to emperor Ashoka’s son, Mahendra, and daughter, Sanghamitra, taking the message of Buddhism to Sri Lanka.  He also remarked that it was believed that on this day, Arahat Mahinda, a Buddhist monk, returned and told his father that Sri Lanka had accepted Buddha’s message with enthusiasm. The belief spread and Buddha’s message was accepted by and for the whole world. Buddha’s dhamma was for humanity.

He also said that Buddha was universal and buddhatva was a sense of ultimate responsibility. He underlined that many questions arise along with environmental concerns and climate change. But, if we adopt the message of Buddha, then instead of ‘who will do’, ‘what is to be done’ path would start to show itself. PM Modi mentioned that Buddha was in the soul of humanity that connected different cultures and countries.

“India never believed in restricting the knowledge, great messages or the thoughts of great souls. Whatever was ours was shared with the entire humanity and that is why, human values, like non-violence and compassion, are settled in the heart of India so naturally”, he commented.

He stated that Buddha was the source of inspiration for the Constitution of India as Buddha’s Dhamma Chakra is sitting on the tricolour of India and giving us momentum. Even today, if someone goes to the Parliament of India, then the mantra, ‘dharma chakra pravartanaya’, is observed.

Talking about the influence of Lord Buddha in Gujarat and, specifically, the Prime Minister’s birthplace, Vadnagar, he said Buddha’s influence could be observed in western and southern parts of the country in equal measures as the eastern parts.

“The history of Gujarat shows that Buddha is beyond boundaries and directions. Mahatma Gandhi, born in the land of Gujarat was the modern flag-bearer of Buddha’s message of truth and non-violence”, he added.

Quoting Lord Buddha, “appa deepo bhava,” meaning, “be your own lamp”, the Prime Minister said that a self-illuminated person would show the path to the world. He concluded, saying that the day would mark the motivation for India to become self-reliant, providing strength to participate in the progress of every country in the world. PM Modi also remarked that Lord Buddha’s teachings were being taken forward by India in the mantra of ‘sabka saath, sabka vikas, sabka vishwas and sabka prayas’.