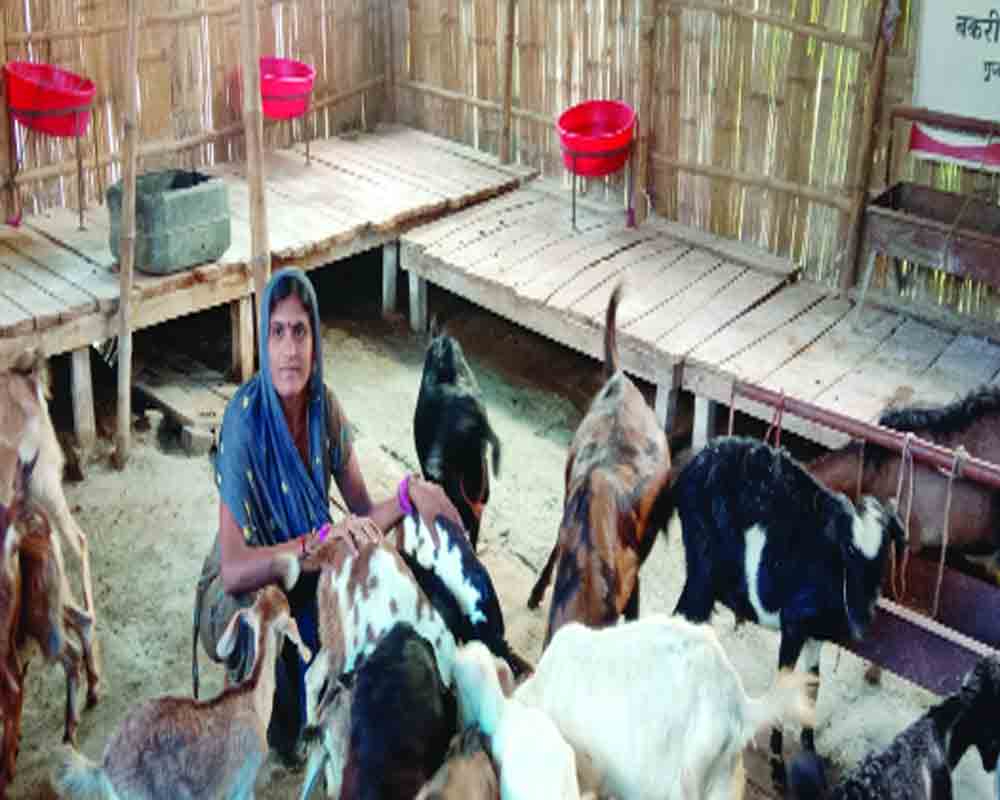 The Sehgal Foundation has been assisting women in Muzaffarpur to consider goat-rearing as a mode of additional income since relying on agriculture alone provides little profit, says Sarita Brara

For rural communities dependent on agriculture, one and a half bighas of land is not enough for survival. Mintu Devi and her husband from Ratanpura village in Muzzafarpur district of Bihar had only that much land. When they had almost given up on cultivation, Sehgal Foundation  — a non-profit organiSation — guided the couple to make the most of the resources available to them. Arrangements were made for Mintu to receive training from the Kisan Vikas Kendra and RSETI (Rural Self-Employment Training Institutes) — an initiative of the Ministry of Rural Development (MoRD). The couple were also given farm implements like a planter, on rent, to sow potato and wheat seeds.

“Earlier the input cost was more while the production was less. Now, it is the other way round, less expenditure on the inputs and more income from the production,” shared Mintu, adding that, “People would look at me with awe when I used the planters in my little farm.” While mechanisation helped in increasing the production of the two commodities, it was still not enough for a decent living.

Realising the need of additional livelihood opportunities, the foundation decided to encourage small-scale farmers to opt for additional livelihood related activity to bolster their income apart from assist them in increasing production through mechanisation. They did a pilot project and realised that goat farming or goatery can be a good source of income in the region, as it did not require a major investment. Goats can also be sold to procure cash in case of any emergency or to meet unexpected expenditures. However, as goats are sensitive animals, they require proper care and attention, especially during peak summer and monsoon months. Apart from the training, another formidable challenge was ensuring the availability of medical care. This was done in collaboration with the Department of Animal Husbandry.

As it is the women usually look after cattle and Mintu was given five female, as well as one male goat. She was provided with training before and after the goats were given on their upkeep, preparing their feed, timely vaccination and the kind of dwelling that was needed for their shelter. This was in July 2019.

In the last two years, Mintu’s life has transformed. Today, she is not only the proud owner of a general store that she opened exactly a year after she began goat farming, but her goatery enterprise is flourishing with the third generation of 15 goats. Additionally, her earnings from agriculture have almost doubled and she has invested in more opportunities.

“I am keeping six quintals of potatoes in a cold storage at Mehsi village located a few kilometres away from our village in the hope of selling potato seeds at a good price,” she explained. She also has a kitchen garden in which she does subsistence farming. Mintu has become an inspiration for many others in the village. She encourages other women to adopt goat-farming as an additional activity to earn more income.

“If you are able to earn income on your own, people start respecting you,” believes Pinki Devi from Kodar Ketta village. She too is one of the beneficiaries of the goat-farming project.

After an her brother-in-law’s accident and the closure of their general store, Pinki and her husband found themselves at a stage where it had become difficult to sustain life. Her husband had to take up odd jobs for two square meals. It was at this juncture that Pinki was selected as a beneficiary by the foundation. Today, she has 25 goats — six males and 19 females. “There is enough grain production from our small holding of half a bigha to grow bajra and paddy to feed the goats,” she said.

Asha Devi, a middle aged woman from Nariyar village of Motipur Block, had never been to school and was not even semi-skilled. Her husband is a daily wager and they have six children to feed. An additional source of income was more than welcome in her household. Rearing goats was not a bad idea but she did not have the required money. While Asha, like other selected beneficiaries, did get the unit of five female and one male goat, it has not been easy for her as few of her goats fell sick. Despite the setback, she is hopeful that once the rainy season ends, she will be able make good money from this business.

The project is aimed at empowering women who are not skilled in any trade, help mechanise the small land holdings of marginal farmers and improve the living standard by providing goat farming units as a source of additional income.

“Women are at the centre of the development initiative undertaken in the villages,” says Rahul Kumar, the programme lead of Local Participation and Sustainability. The lives of forty women selected for this project including Mintu and Pinki in five villages of Muzaffarpur have benefited through goat farming.

If women are able to earn extra income through an activity that does not require any special skill, it can result in their empowerment and lead to their social and economic upliftment. The challenge is to ensure that these livelihood options not only continue, after initial hand-holding by the NGOs, but are expanded as well.