Warp and weft of hope

Warp and weft of hope 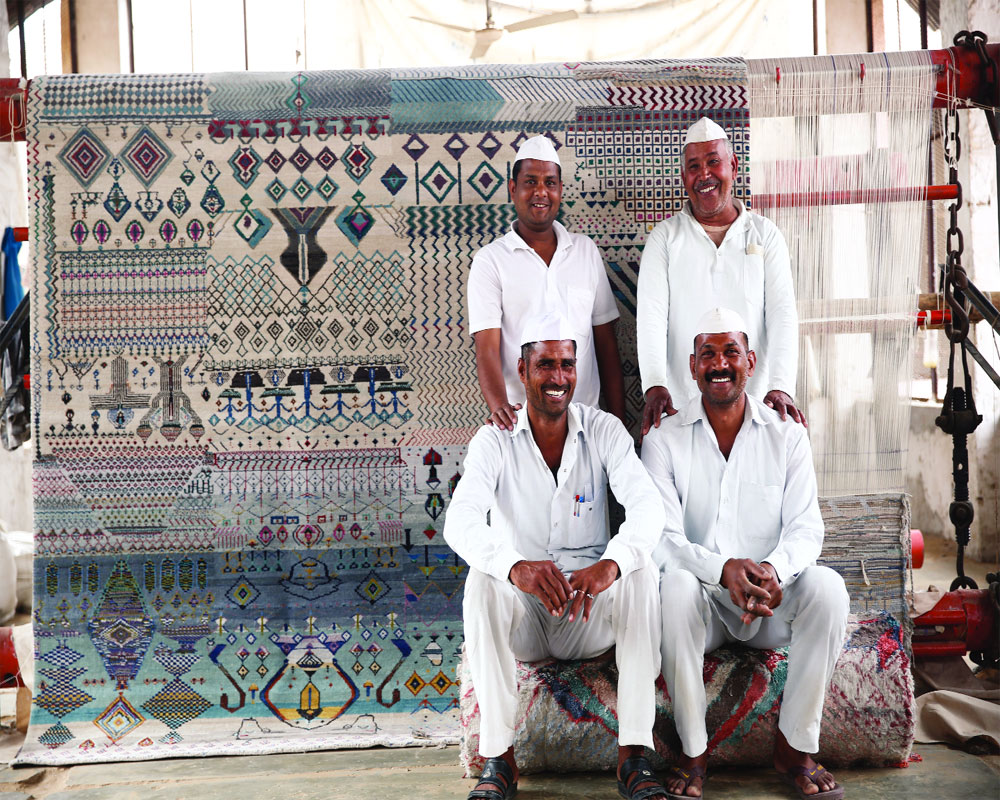 A manufacturer of hand-knotted carpets has launched a special collection — Manchaha-Freedom Edition — in collaboration with jail inmates to provide them with sustainable livelihood to support their families. By Sakshi Sharma

A contemplative man, Wahid Khan, weaved in snippets of jail — the square cell, books, a banyan tree in the yard, a bucket, utensils used by prisoners to make food and tea, the wide grey metallic rods of gate and birds eating leftover meals — in his rug Zindagi ki seekh. An avid believer, he also wove symbols of Gandhi such as dhoti and charkha. To the people that see his rug, he said, “For life to be enjoyed to the fullest, you must learn to take it seriously. Even in laughter, enjoy it for what it is, do not lose yourself in it as that may have consequences.” During his stay in prison, he has learned to connect with himself more, appreciate the simple things in life and experience every emotion vividly which, in turn, has helped him to prepare the rug more intricately.

One would wonder how prisoners waiting to escape the darkened enclosure with scratched walls have become the warp and weft of carpet weaving. Under an initiative that began in September 2018, Jaipur Rugs collaborated with jail inmates to launch a special collection — Manchaha-Freedom Edition — of handmade rugs. The brand has worked with authorities in Jaipur Central and Bikaner Jail to provide its inmates meaningful work by teaching them the art of carpet weaving. It has opened bank accounts for inmates to help them receive the payment directly and provide for their families while being lodged in jail.

Brand director, Yogesh Choudhary, shared, “We believe in being an inclusive development practitioner to promote creativity. Under this initiative, we are working with over 100 inmates across Jaipur, Bikaner and Dausa Central Jails to provide them meaningful and fulfilling work. The capacity to imagine motivates which, if nurtured appropriately, adds to the prestige and prosperity of individuals.

One of the biggest tragedies to befall a family is the incarceration of the breadwinner. Their lives are upended irreversibly. Most of the prisoners come from economically weak backgrounds and are rarely literate. Their lives are marred by poverty and crime and the only way to bring about a change is to empower them economically. Under the initiative, we teach carpet weaving to inmates who are serving long sentences with the aim of creating sustainable livelihood for them so that they can support their families through it.”

An inmate, Amar Chand, is 44 years old and hails from Diggi, Rajasthan. Amar, an experienced weaver, was surprised to see weaving as an activity for prisoners in Jaipur and didn’t hesitate to participate in it. Choudhary shared, “He was constantly reminded of traditions that he feels are slowly fading in today’s world. He filled the one he wove with intricate designs along with simpler symbols like an elephant, horse, duck and bees. It seemingly comes out as a carnival embraced by nature. For a quiet person, his thoughts come out boldly and in clear detail on the rug.” When asked about the message expressed in his design, Amar said, “Happiness and sadness come and go but peace can truly stay. That’s what my carpet and design ‘Old is gold’ stands for.”

Next in line was Ghanshyam, an inmate in Central Jail, Jaipur. He learned weaving as a part of the prisoners’ rehabilitation programme. Yogesh described him as intelligent yet playful, who enjoys working hard to see the final result bloom. He is in his 40s and feels that the initiative has been his liberation from the difficult events that resulted in his incarceration.

He used Tikona (triangle) to express the patterns on his rug. Said Choudhary, “He attempted to explore the creative limits of a triangle, weaving small and large patterns that branch in or out. The wide array of patterns mesmerise the onlooker. Ghanshyam shared that during the weaving process, the Hindu god Shiva, was constantly in his mind, who according to mythology is the one who looks after the disparaged. He said, ‘I felt shattered to be in prison but Shiva took me under his protection and gave me an opportunity to work and find my redemption.’”

The art has certainly helped various inmates to find and express their inner calling. The campaign’s title itself speaks of the freedom it hopes the inmates to achieve. “Manchaha, a Hindi word popular in Rajasthan’s weaving community, means “expression of my heart,” and is a sustainable development initiative where weavers get to design their own rug for the first time in the State. It taps into the untamed fashion in rural India by nurturing their creative potential and empowers a community. Each rug, hand-made with more than 200,000 knots, is the story of its creator,” said Choudhary.

India has millions of craftsmen who are engaged in traditional crafts that symbolise the cultural identity of the civilisation. However, there is a growing concern that our ancient crafts are dying and skilled artisans are an endangered species. “This is because a number of these crafts do not provide sustainable livelihood which has deterred the next generations from taking them up. Hence, we tried to make weaving into a sustainable livelihood that generations can practice from the comfort of their home,” says Choudhary.

On the consumer front, lack of awareness among the end-users about India’s traditional art forms poses a tough challenge for ancient Indian art forms. “To make the customers see the tremendous value of these ancestral art forms and make them realise their uniqueness are the true tests of all brands in this space,” he added.