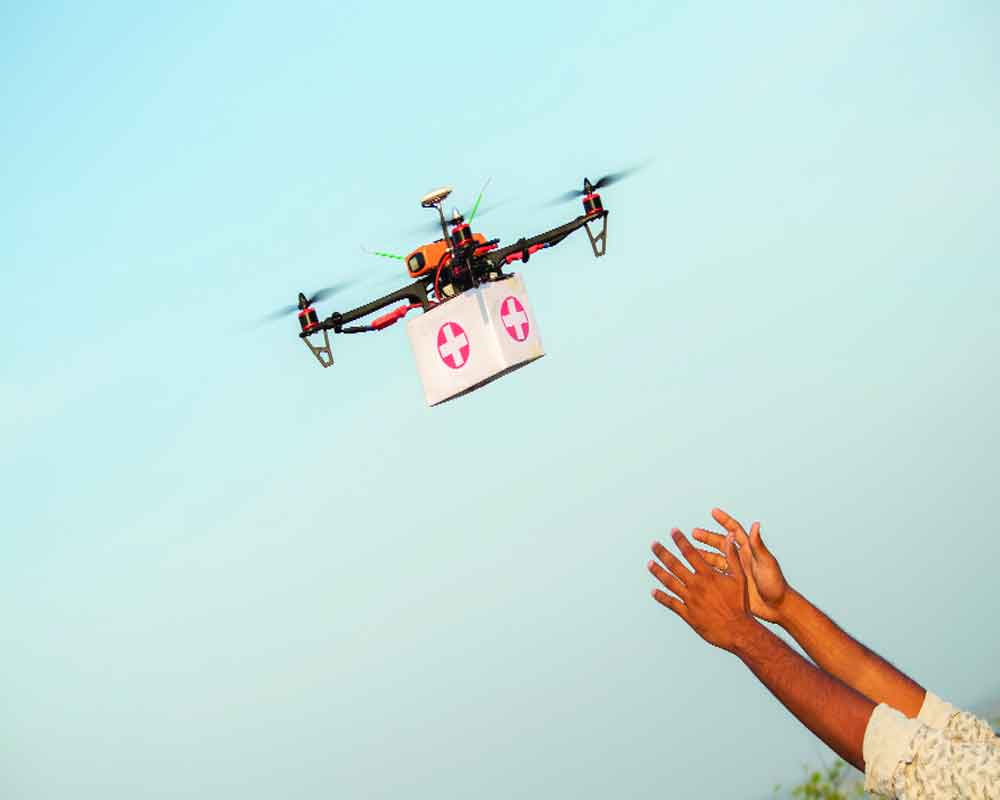 Drones can reach remote areas with little or no human interference and within the least required effort, time, and energy, says PRABHAT SINHA

In her budget speech, Indian Finance Minister, Nirmla Sitaraman spoke about the drone shakti scheme, encouraging drones as a service in our country. Undoubtedly, drones have evolved from defense-only equipment to multi-purpose equipment, which can be used for several sectors like governance, farming, logistics, to name a few. The finance minister proposed extensive use of drones in agriculture, including spraying insecticides and nutrients. The proposed drones-as-a-service (DRaaS) model has capabilities to revamp and boost India's fragmented drone industry for new business and employment avenues. Under the drone shakti scheme, startups will be encouraged to facilitate drone shakti with its application in multiple sectors. In select ITIs, the required courses for skilling will be started in all states, as per the finance minister. Including drones in the ITIs syllabus will enable a robust foundation for a drone-based ecosystem.

Though drones have existed for the last two decades, the last few years have been very significant in the evolution of Unmanned Aerial Vehicles. Whether we call it Flying Mini Robots or Miniature Pilotless Aircraft, major drone activities can be identified as flight piloting & operation, data analysis, and data processing. Drones are built using IOT technology, which includes a controller from which launch, navigation, and landing activities are controlled either with the help of remote controls, mobile apps, or automated. The controllers communicate with the service of radioactive waves such as wi-fi. Like any other active device, drones also need a power source like a battery or fuel. drones are also equipped with propellers, rotors, and a frame. drones are made up of composite and lightweight materials so that their weight is considerably low with better transportability.

Drones are not only helping the military, but they are also helping businesses with complex activities normally undoable by humans in a timely and effective way. The adoption of drones by businesses is quick as companies across the globe have identified the infinitive potential of drones. It boosts speed, productivity, and efficiency and improves accuracy. Drones are majorly used for Express shipping and delivery, Unmanned cargo transport, Aerial photography for journalism and film, gathering information for effective disaster management, Thermal sensor drones for search and rescue operations, Geographic mapping of inaccessible terrain and locations, building safety inspections, Crops monitoring and assessments, Border control surveillance and Law enforcement, Weather forecast for storm tracking, hurricanes, and tornadoes. Drones can reach remote areas with little or no human interference and within the least required effort, time, and energy. Consequently, drones are getting adopted worldwide, specifically by Military, Commercial, Personal, and Future Technology.

Recently, the Ministry of Civil Aviation approved a project of the Telangana state Government to use drone technology to deliver vaccines in remote areas. A lot depends upon drone technology for the growth of the Agriculture sector. Drones will spray pesticides and micronutrients evenly in farms and be used extensively to monitor crops and identify the challenges faced by farmers. The SVAMITVA scheme launched by the government has helped millions of village residents with property cards. Drones can be effectively used for emergency services like fire protection, healthcare, and flood relief where human intervention risks life. Police departments of several states use drones for law enforcement activities like - search and rescue, crime scene analysis, surveillance, crowd monitoring, etc. Recently Bihar police have started using drones to trace liquor manufacturers and distributors located in remote and densely populated areas to enforce the liquor ban.

An Irish company named Manna began its drone delivery services last year. According to them, drone delivery is 90 per cent cheaper than car-based delivery. The drone industry looks promising as the drone service market is expected to grow threefold to US$ 40.7 billion in 2026 from the recent market worth of 13.9 billion in 2021. To boost the growth of the drone sector, the government has banned the import of drones and their raw materials. Lockdown imposed during COVID 19 grew the growth of drone technology as companies, and government organizations started using it exponentially. Major companies like Amazon Prime Air, Zomato, FedEx, Boeing, DHL International GmBH, drone Delivery Canada Corp, Airbus have already started their drone delivery services. The drone sector has become a lucrative career option for youths with rapid growth opportunities. It has the potential to grow and penetrate several other industries with ample employment opportunities.

The growing use of drones in multiple sectors has several associated risks like drone attacks, delivery of weapons, increased terrorism, to name a few. drones are comparatively cheaper than conventional weapons but still can be destructive with a far better reach. Apparently, the number of drone strikes is increasing, we also encountered a drone attack in our country at Jammu airport last year. Consequently, DRDO has developed an anti-drone system, and another is in development. The Anti-drone system has soft kill and hard kill options available. Soft kill option jams the drone, hard-kill option shoots down the drone with the help of laser technology, other drone or missile. Government should make strict laws and regulations to prevent the destructive use of drones. Further defense drones should not be procured for nondefense purposes under any circumstances.

The Writer is Prabhat Sinha, IT Expert & Amazon Bestseller Author of Innovate & Seize Your Success